Automatad Team
Google DFP enables the publishers to manage their ad inventory in a more effective way by offering an intuitive set of features. Let's dive deep into what they are.
Share Tweet Share

Did you know 81% of small publishers are using Google Ad Manager to monetize their ad inventories? Whether you knew it or not, the statistic must have astounded you. The market share of Google Ad Manager proves how it is leading in the advertising industry.

However, due to the existence of several of Google’s publishing products, it happens to be quite difficult for beginners to understand the difference. And how each product works. If you are also in the same boat, this article is catered to you. Here we are going to discuss everything related to Google Ad Manager (Google Ad Manager tutorial) from the basics to how to set it up and start serving ads. So, shall we start?

What is Google Ad Manager?

In short, Google DFP (Google Ad Manager) is an ad server. But what’s an ad server? It is a technology that enables publishers to define, manage, and monitor ad inventories on their web, mobile app, or video ad inventories in order to display various types of ads.

GAM for Small Business is a free version of Ad Manager, and it is designed for small to medium-sized publishers. With this version, you can have:

In addition to the ad serving, it provides various decent features including reporting and access to API.

However, these features are limited since it is a free version and designed for publishers with a few million impressions. To use advanced features and serve the ad impressions more than the threshold, a publisher has to upgrade to Google Ad Manager 360.

Google Ad Manager 360 is the premium or paid version of Ad Manager and provides access to features including advanced reporting, video solutions (hosted video size limit, interactive ad formats, etc.), audience solutions for better segmentation, and so on. Not only this, but you can also get direct access to Google support, integrate Google’s Data Studio for better reporting, and more.

How does Google Ad Manager Work?

As Google Ad Manager is an ad server, publishers are using it to manage their direct and indirect advertisers. At a basic level, the Ad Manager works as described below:

*A line item is the primary element in Google DFP that helps the ad server to decide which ad to serve, how to serve, and when to serve it. Here’s a complete guide that you can refer to understand everything about line items.

How is Google AdSense different from Google Ad Manager?

Although Google AdSense and Ad Manager enable the publishers to sell ads on their websites, each of them offers different kinds of features and services. AdSense is an ad network that helps publishers to sell their bulk of ad inventories to Google Ads advertisers.

Moreover, there are various other differences between Google Ad Manager and Google AdSense that we have outlined here.

Can you use AdSense with Google Ad Manager?

Of course. In fact, it is recommended to publishers use Google AdSense along with Ad Manager in order to maximize the ad revenue. How does it increase revenue?

When do you need Google Ad Manager?

*SSPs and Ad exchanges are the middlemen that connect you to the advertisers. Unlike Google AdSense or any other ad network, SSPs and Ad Exchanges can offer you to sell your ad inventories to multiple advertisers in real-time and at higher eCPM rates.

Is Google Ad Manager an Ad Server or an SSP?

Google Ad Manager has been hailed as one of the best ad servers for its numerous benefits for publishers. Here are some of the key advantages of GAM that you should know:

One of the most important aspects of ad-tech products is the user interface. Having a beginner’s mind, Google has designed the user interface of Ad Manager as simple as possible in terms of navigation and task orientation.

It makes sure to show the right amount of information on a single screen in an organized way. On the left sidebar Google Ad Manager Home page, you can find all the necessary elements of an ad campaign. Additionally, if you don’t understand a particular element of the UI, you can simply click on the “?” and the Ad Manager will display the explanation and additional information.

A relevant audience is extremely important to scale up the ad revenue for the publishers. By using Google Ad Manager, you can display targeted ads based on common factors such as:

In addition to the aforementioned factors, you can also target the audience based on custom parameters via key-value targeting.

Google Ad Manager offers various insights into how the ad campaigns are performing. With the ad server, if a user viewed/clicked an ad, you can track that. By looking at which ads get clicks and which don’t, you’ll quickly see where to invest your time.

Formerly known as “Queries”, the ad server provides different reports including pre-defined templates so that new publishers can create reports on common data. By using Google Ad Manager reports*, you can find out valuable information and data about how much a particular advertiser pays you, how many impressions ads are getting, and more*.

*By using key-values and reporting features together, you can gain insights into various custom parameters such as how an on a particular page performed, how an ad size 720×90 performed, and so on.

Importance of ad testing is imperative. A lot of times this process is skipped by publishers. Therefore, the ad experience and user experience might get affected. To understand how the ads will look on the website, Google Ad Manager provides a testing environment for publishers.

With this testing feature of the ad server, you can create dummy advertisers and ads, and notice how user experience is getting affected. You can do A/B testing with different ad units and see which layout is looking better. This is just an example to illustrate the types of testing in the Ad Manager. Read this article to learn how to test your ads on the ad server.

What are the ad formats you can serve via Google Ad Manager?

Unlike AdSense, Google Ad Manager is not limited to just image ads or text ads. There is a long list of ad formats that you can serve via Google’s ad server. Such ads can run on websites, applications, and videos. Since we believe that you’re familiar with display ads, let’s have a quick introduction to other ad formats available in Google Ad Manager:

Native Ads: Native ads are the ads that match the look and feel of the organic content of the website. Such ad formats can appear in different names, for example, recommended widgets, sponsored ads, promoted ads, and so on. Check out this step-by-step guide to learn more about serving native ads through Google Ad Manager.

Just like native ads, you can serve multiplex ads via Google Ad Manager. Here’s how to set them up.

Responsive Ads: Today, our audiences are everywhere. Desktop, mobile, tablet, etc. Google Ad Manager helps publishers deliver responsive ads so that publishers do not have to compromise with the user experience. Responsive ads are the ad types that can adjust their size and fit into the devices they are going to be served. Learn more about how to set up responsive ads in Ad Manager in this article.

Video Ads: For those who have been in digital advertising for a while, you might already know what video ads are. Video ad format consists of a video in the ad and can be played with video content or without video content. In Google Ad Manager, you can add any type of video ad unit i.e. instream and out-stream. Here’s a guide to help you with how to get started with video ads in Google Ad Manager.

So, How to Set-up Google Ad Manager?

Signing up for GAM isn’t rocket science. But there is a prerequisite to join Google Ad Manager i.e. having an active AdSense account. If you have an AdSense account, then you’re just a few steps away from getting access to Ad Manager. Go to the Ad Manager’s home page, and fill in the details as required. 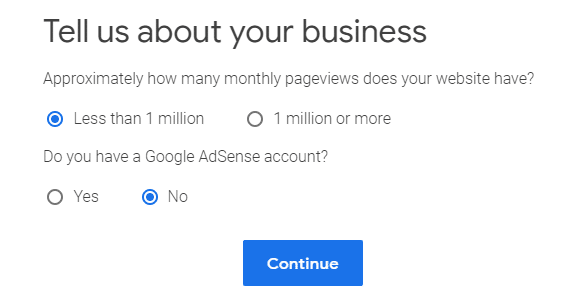 After filling in the details, you need to wait for a few days to get approved by Google. Once you get the approval, you’re ready to set up the ads in Google Ad Manager. Don’t know how to do it? We are here to help you. Follow the steps given in this guide.

How to Link Google AdSense to Google Ad Manager?

So, you have set up the ad units and are ready to start serving ads via Google Ad Manager. Now, why not link AdSense to Ad Manager so that you can fill the remnant ad inventories? Sounds great? Let’s have a glimpse of the required steps:

Also, you need to enable the linking of AdSense in the AdSense account.

When you’re done with linking the AdSense to the Ad Manager, you need to make a few changes in the Ad Manager to serve ads via AdSense. Here’s an article to help you with the same.

If you already have an ad partner with you, it’s quite simple to organize them in Google Ad Manager. Some best practices to Organize your Ad partners are as follows:

Google Ad Manager is the leading platform in the advertising industry. As a unified solution, it has the advantage of easier setup, maintenance, and administration process. Though some publishers may find it overwhelming at first, investment in Google Ad Manager is worthwhile. Did we miss anything to include in this guide? Let us know in the comments and we will add the answers.