According to a report published by Business Insider, native display ads revenue will make up 74% of total US display ad revenue by 2021 (Src).

Native advertising has been leveraged by many premium publishers including Men’s Health, Forbes, BuzzFeed Inc., etc. as the ads are more publisher-friendly and look like the regular content present on their website. As a result, native ads look less like ads and help publishers to reduce banner blindness to some extent.

So, let’s begin with the basics and try to find out how can a publisher implement Google DFP native ads on a site.

As defined by Google, a native ad is designed by a publisher according to the layout of a web page. In contrast to banner advertising where advertisers return the complete ad with a fixed size, native ad creatives are designed by Google Ad Manager (DFP) after collecting different structured components (Image, Headline, Clickthrough URL, Ratings, Body Text, Ad Badge/logo, etc.) from advertisers.

What are the Components of a Native Ad in Google Ad Manager?

Usually, when you break down a native ad, you’ll find three major components.

An ad attribution is required to be present in a native ad to ensure that a native ad is identifiable as advertising before users visit the advertising URL and don’t misunderstand it for the website’s organic content. Therefore, publishers must display “Ad” or “Advertisements” on the ad creative.

AdChoices overlay is controlled by the buyers and present in the upper right hand of an ad. It is used by advertisers to target visitors and bring back to their website. This overlay consists of a URL and provided by the advertisers in the bid response. 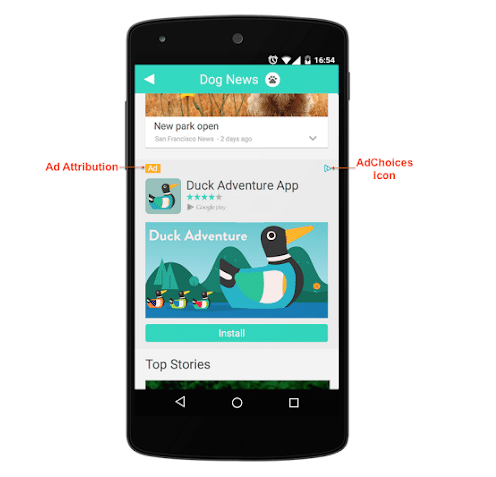 A native ad consists of a thumbnail, brand logo, or creative content-type Icon (optional). Also, there should be a headline and description in a few words (there are limitations and extra characters will be truncated). Publishers are allowed to scale the image element without changing the aspect ratio, or they can crop the image by up to 20% in one dimension.

Although these are the essential components of a native ad, it can also have visible call-to-action (CTA), star rating icons, etc.

Note: It is required for App Install native ad to have an app icon and it can include play store icon, price of the app, etc. Also, a Video native ad should have a video field that should contain all mandatory components to playback the video ads.

Custom native ads are used by the publishers who want to define their variables for native ads. Here, variables* of the native ads are provided by the trafficker and using these values, Google Ad Manager generates an ad.

*Variables denote various elements of the native ad. Examples include the headline, body, image, etc. Publishers go with custom native ads when they need to define variables that aren’t available in Google Ad Manager by default.

How to Create and Run Native Ads via Google Ad Manager?

A publisher has to go through the following steps to create and run native ads. We’ll dive into the specifics while discussing the steps later.

To run native ads, you are required to create styles (to put it simply, templates) that define how your ads will look exactly. 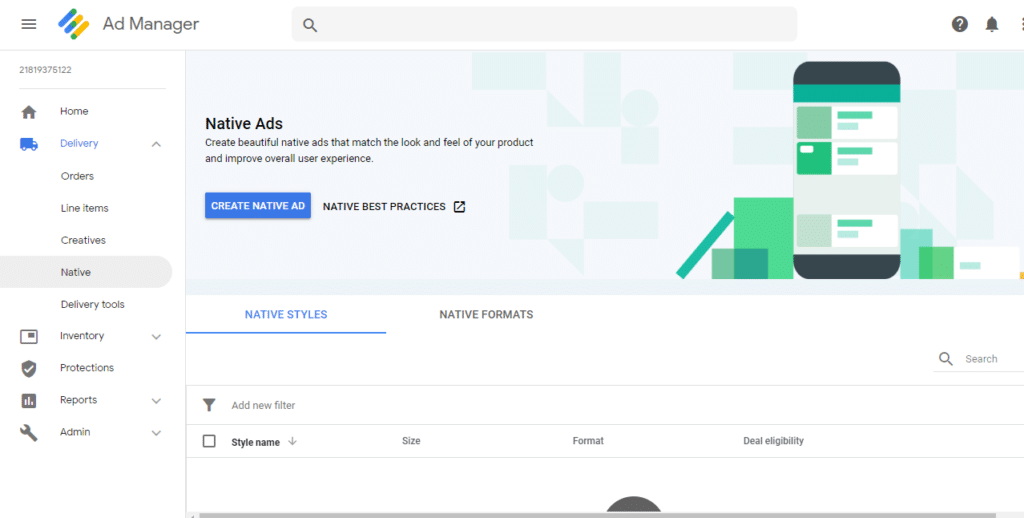 If you want to start with predefined elements for the native ads, then go with the Guided Design Editor. Or, if you want to create a native ad from scratch, then pick HTML & CSS Editor. Apparently, the Android & iOS app code is for app publishers. Once you pick the option, you can name the native style.

In this section, a publisher needs to set up the targeting* of native ad inventory. You can target a native ad line item based on Geography, Device category, Operating system, and Custom targeting. Make sure that Inventory is selected as Native. After setting up all targeting parameters, click Save and Finish to finalize your native ad.

*The targeting here should match with line item targeting that will be created later.

Select the HTML & CSS Editor if you want to create a custom native ad and, follow the below steps –

This step is similar to what you have done in the Guided design editor. Just make sure that the targeting options chosen on the page with native ads should match with the line item targeting. In case, if you don’t know how to set up targeting for line items, just head over to our guide.

Now, let’s talk about the third and last method i.e.

This method involves only defining ad settings for Android & iOS native app ads, everything else is taken care of by Google Ad Manager itself. So, if you’re an app publisher or a developer, then follow the steps given below to define a native ad.

That’s it. Now, let’s see how you need to create ad units, line items, and add creatives to serve native ads on your site.

As we have already talked about how to use different editors to create native ads, the next step is to serve them by creating ad units and line items in Google Ad Manager.

In case, if you need help creating ad units, here’s an article that will help you to do the same. Under sizes, add “Fluid or Fixed (any standard size you want)” depending on whether you want your native ads to have fluid slots or not. The ad unit setup is the same for all the native ad campaigns you’ll run – be it programmatic guaranteed or any other non-guaranteed campaigns. You just have to follow the usual setup.

Though creating line items follows the usual steps, you need to select the size based on the campaign you’re looking to run. That is, you’ll be adding sizes a bit differently for guaranteed and non-guaranteed campaigns. Similarly, to make banner ads compete with native ads, you’ll be appending the sizes of line items. We’ll take you through the exact steps in detail for each scenario in a moment.

For running native ads via a programmatic guaranteed campaign, you need to follow the steps described below: 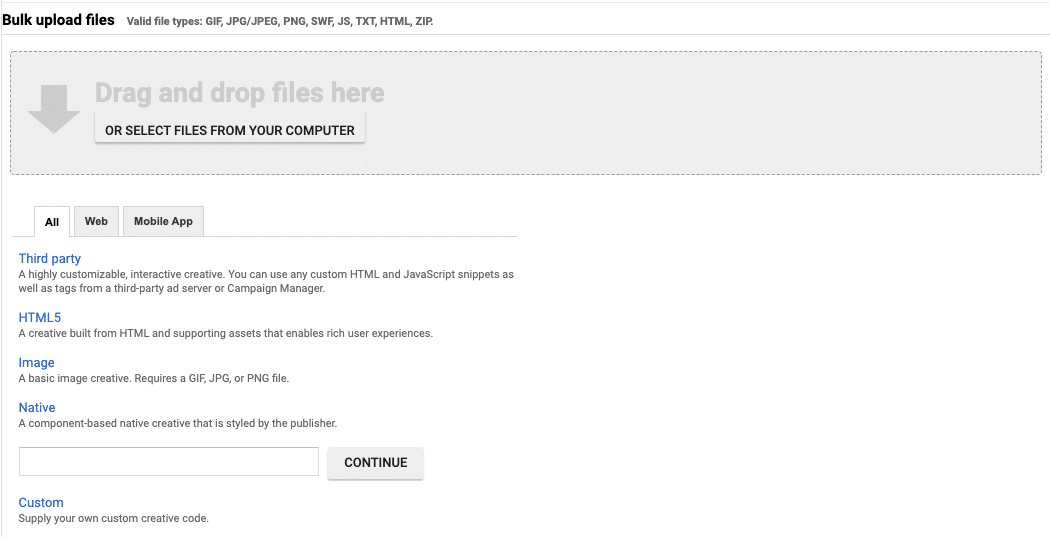 If you’re looking to serve native ads by getting the demand from ad exchange, you need to follow the same steps with one exception – In the “inventory sizes”, you need to add “Native (Native)”.

When it comes to creatives, you need to select add new creative and click Native. In the next step, you need to add the native ad format that has a native style in place*. That is, if you have created Native Style for content ad format, you need to add “content” here.

From creating native style to a native ad unit, everything is the same, while creating a line item, you need to add both “Native (Native)” and banner sizes (whatever native ad size you want to compete with native ads) in the “Inventory Sizes” field.

For example, you’ll add a new line item, select inventory sizes as Native (Native) and 300×250, and then set the priority as required and then, save the line item.

When it comes to adding creatives, you’ll follow the usual steps, but add all the inventory sizes including Native and check override.

Creative > Settings tab will take you to the screen where you can add size overrides as shown below. Note that you need to add these sizes in the line items before adding them here.

To run native ads on your site using Google Ad Manager, you need to

– Create and save native styles (consider them as templates for ads).

– Populate native line items and creatives based on the campaign you wish to run.

For the guaranteed campaign, you will add the name of the native style in the ‘inventory size field and also, while adding creatives.

For native ads via ad exchange, you have to go with “Native (Native)” as inventory size and while adding creatives, you’ll select the ad format for which you have the native style created.

For banners ads vs native ads scenario, you’ll add both Native (Native) and sizes you would like to put against native ads in the inventory size and while adding creatives, you’ve to add all the sizes and check the override box.

Although native ads are less intrusive than banner ads, there’s no assurance that native ads will always help you get a better yield than other regular display ads. It is better to experiment and then decide.

There’s no one-size-fits-all solution in adtech. Native ads, indeed, fit well with your content but users might scroll through it unless it is contextually relevant and delivered at the right moment. Besides, the demand for native ads is less compared to banner ads.

If you’re running native ads, you can go with PG or ensure you’ve also allowed banner ads to compete for the impressions. That way, you’ll reap the best revenue while rendering native ads whenever it pays you better. Have any questions or need any help with the setup, reach out to us.

How Can Publishers Get Started With Native Email Ads?

What Are Multiplex Ads? How To Get Started With Them?

Prebid Native Ads: A Simple (But Complete) Guide For Publishers