Google Ad Exchange, also known as ‘Google AdX’, is an ad exchange from Google that’s been serving both sides of the ecosystem — publishes and media buyers from 2009. When Google bought DoubleClick back in 2007, it ended up acquiring all the assets including the up-and-coming DoubleClick Ad Exchange.

After the acquisition, Google continued to develop the ad exchange and launched it as “DoubleClick Ad Exchange” in 2009. And, the rest, as they say, is history. In a span of over a decade, Google attracted millions of sellers and buyers, eventually, making its ad exchange the largest in both size and revenue contribution. When we studied hundreds of our publishers, Google (AdX) ranked as the top demand partner that contributes to more than 50% of the total programmatic revenue.

Without any further ado, we’ve compiled resources on Google Ad Exchange to answer all your questions. From the account setup to revenue optimization, you’re looking at the most comprehensive guide on AdX. Bookmark it; you’ll want to visit this page often.

Just like other ad exchanges, Google AdX is a marketplace that offers a pool of ad impressions to buyers via real-time bidding. But, unlike AdSense, Google Ad Exchange is a platform that cannot be simply integrated into a website. What we meant by that is – a publisher cannot access Google’s AdX without Google’s ad server platform i.e. Google Ad Manager (Google DFP). So, to take advantage of Google AdX, it is mandatory to have an account with Google’s ad server.

Learn more about its features and understand the difference b/w Google AdX and AdSense.

Am I eligible to get into AdX?

Hands down, this is one of the frequently asked questions, but it has no definitive answer. Google hasn’t disclosed the minimum eligibility criteria to get into Google Ad Exchange. That being said, we know who aren’t eligible.

You can get a Google AdX account in two ways.

The best part is, you don’t have to have tens of millions of page views if you are using a third party to do it. However, you’ll end up paying a fee, likely around 5% to 10% for accessing Google Ad Exchange. We’ve talked about the steps in detail here.

What Should You Look For in a Google AX Reseller?

Not all Ad Exchange resellers can produce the same results in terms of CPM and revenue. That’s why it is important to look into key factors before signing up with a reseller and see how they are the best fit for you. Well, we are going to give you an AdX reseller checklist that you can use to find a reseller that meets your expectations and helps you maximize the yield.

We’ve explained all the factors in detail for your reference. While it’s not necessary that you have to check all the boxes mentioned above, but ensure you ask the right questions.  In some cases, your manager header bidding provider will also be a Google AdX partner. If that’s the case, see if you can negotiate a better rev-share and get access from them.

How to Link Your Google Ad Exchange Account to Ad Manager?

Note: Ensure you have complete access to Google Ad Manager and familiarize yourself with the navigation first.

How to Increase Your Google Ad Exchange Revenue?

Now that you have signed up for AdX, linked your account with GAM, it’s time to see how you can maximize your revenue with the optimal setup. Note that implementing header bidding can intensify competition, which in turn, forces Google AdX to bid higher to win the auctions. So, you should first run header auctions and then follow the below optimization steps.

Broadly, you can increase AdX revenue by optimizing inventories, rules, and leveraging Opportunities and Experiments. Here’s the overview:

Learn how to do it in step-by-step here.

What is the point of setting up Google AdX, if you couldn’t understand its eCPM? We want to make one thing clear — Google isn’t going to provide you the highest eCPM but it will buy a huge volume of your impressions.

Let us help you understand Google Ad Exchange’s performance across the browsers — Chrome, Safari, Mozilla Firefox, and more. Why? We know for a fact that Google AdX is the largest demand partner that contributes to more than 50 percent of the ad revenue and it is important to know how it performs in both cookie and cookieless environments. 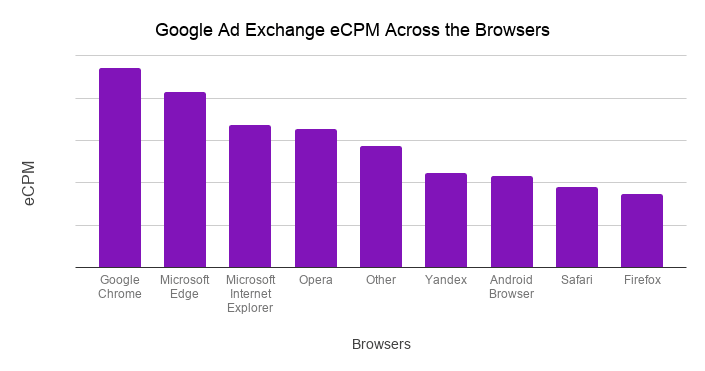 Here’s how Google Ad Exchange performs in both cookie and cookieless environments.