How to get Google Ad Exchange (Google AdX) Account?

Automatad Team
Based on the demand, you’ll get CPMs as high as $5 to $7, on a typical day. No more CPC game, it’s all about impressions now.
Share Tweet Share

If you’ve used any of Google’s services, you know that the company prefers the users to get in by themselves. For instance, you can access Adsense demand by pasting its tag to your site, and it’s done. The rest is all set and you’ll be paid every 30 days. But, most of the publishers aren’t satisfied with the money they make from Google AdSense. The reason is ad revenue.

Google AdX is the next step in your monetization strategy. Similar to Adsense, you can enter AdX by yourself. It’s an exchange (not an ad network and there’s a lot of difference between them) that allows you to sell impressions rather than clicks. Besides, you’ll get access to a pool of new advertisers who’ve deep pockets and year-long campaigns. In fact, from our analysis, we found that Google Ad Exchange is the best exchange in terms of revenue contribution. You get it, now here’s how to get Google AdX.

What’s the Difference Between Google Ad Manager and Ad Exchange?

Google Ad Manager (formerly DFP) is an ad server that helps publishers like you to manage ad serving, set up and run direct deals, track the revenue, target the right inventory, and more. Whereas an ad exchange is a marketplace where publishers and media buyers come together to buy and sell ad impressions. AdX is one of the many ad exchanges. You can access it via Google Ad Manager. Google has integrated AdX and GAM in such a way that they complete each other. So, they are together, but different.

There are different ways you can signup for Google Ad Exchange.

Yeah, the simplest way to get into the AdX is to ask Google itself. Usually, you’ll be assigned a Google Account Manager* and you can just ask him/her to know whether you can get into Google AdX.

Most likely, the account manager will push you to Google AdX if you’re eligible. So, what if you’re not eligible?

But first, what do you need to be eligible?

What are the Eligibility Criteria for Google Ad Exchange (Google AdX)?

We highly doubt it. We personally know a handful of publishers with 10 million page views/mo. who couldn’t get into Google AdX until we showed them the other way? That being said, there are certain things that won’t get you to AdX for sure. It includes:

– Having non-brand safe content. Your site should be free from:

– Failing to host an ads.txt file.

2. Partner with a Third-party

You can partner with a third-party (Google AdX reseller) of your choice to get into Google Ad Exchange. Google runs — ‘Multiple Customer Management (MCM)‘ and ‘Google Publishing Partner’ programs for third parties to become Google’s authorized partner. You can access Google AdX demand via such resellers. 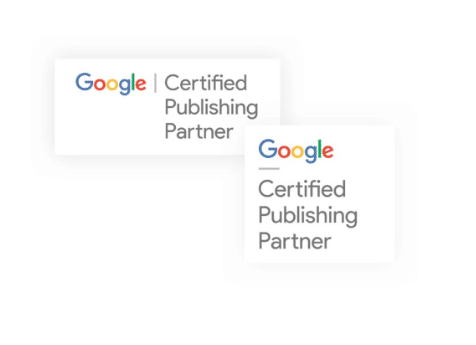 The authorized partners will resell your inventory through Google AdX even when you aren’t getting the invitation from Google. There’s a catch. You have to pay them for access. Most partners will take 10 to 20 percent of the ad revenue generated (via AdX) every month. If you are making $8000 from AdX, they’ll charge $800 for their services. It’s a good option as you’re getting exchange access.

But still, you are leaving money on the table. It is absolutely right to sell your ad impressions via Google’s ad exchange. However, it’s not the ideal setup to reap the maximum benefits. Your revenue will increase (sometimes, by up to 50%), when you make Google AdX compete with other global exchanges.

That leads us to — Header bidding.

To summarize, you can get a Google AdX account by asking your Google Account Manager. If your request is not accepted, you can contact an Authorised Google SPM Partner to get you access to the Google Ad Exchange demand.

We offer header bidding solutions for both mid-sized and premium publishers across the globe.

It’s quite clear. As a publisher, you shouldn’t choke the users with ads on the page. Instead, try to increase the competition, which in turn, intensifies the bidding and increased the revenue. Google Ad Exchange is the largest exchange there is and when you combine it with other exchanges, you can get the maximum revenue out of every session. We can help you with both the setup and implementation. What are you waiting for? We’re just a click away.

How to Increase Your Google Ad Exchange Revenue?

GAM Multiple Customer Management (MCM) – Everything You Need to Know

What Publishers Should Look For in a Google Ad Exchange Reseller?