Automatad Team
Ad Networks and Ad Exchanges are both great ways to monetize your blog. But they seem to get confused a lot. So let's break down the differences between each.
Share Tweet Share

Though Ad Networks and Ad Exchanges serve the same purpose for publishers, the backstory is quite contrary.

For a publisher, making the first step into advertising is simple and linear. Take Google AdSense for instance. To begin with, you need to adhere to the content and privacy policy guidelines. Once you’re approved, you’ll be given a script and asked to create ad units on the desired pages. And it’s done.

We know it’s an oversimplified version of what you need to do to run Google Ads, but the goal is to convey the ‘straightforwardness’ of the process.

Do you know why it’s pretty easy to sign up for Google AdSense?

Because it’s an ad network.

Not just Google AdSense, almost all the ad networks offer you more or less the same sign-up and monetization setup.

When it comes to ad exchanges, the story is completely different. In fact, you need to pass through a few complexities and technical configurations to complete the Ad Exchange setup. However, you can skip it all by partnering with an SSP. And, the effort is worth it.

As you’ve been dealing with doubts already, we don’t want to make the situation worse. Let’s start with the basics.

What is an Ad Network?

Ad Network is a piece of technology that bundles remnant inventories from the pool of publishers and sells it to the advertisers. Most probably, you already know what there is to know about ad networks from a publisher’s perspective.

Here’s a quick refresher to help you.

How do ad networks work?

The advertiser who’s willing to pay the price determined by the ad network’s algorithm gets the inventory and ad creative from the advertiser is served. Publishers will be paid for the number of ad impressions served (most probable based on a revenue-share model).

You can correlate ad networks with your sales team or even yourself. Imagine how you’re trying to sell the ad inventories available on your website to the advertisers by directly connecting with them. You connect, negotiate, and serve the ads.

What is an Ad Exchange?

Ad Exchange is a technology platform where publishers and advertisers transact impressions in real-time based on the behavioral data of the readers. Unlike ad networks, ad exchanges allow publishers to determine the floor price and help them sell impressions (not bundled inventories) in real-time to the advertisers.

How do ad exchanges work?

Both publishers and advertisers use respective technologies (SSP and DSP) to connect to ad exchanges and transact impressions effectively.

So, are there any differences between ad networks and ad exchanges? If so, what are the differences and how to know which one is right for you?

Well, there are some differences you ought to know to make informed decisions.

Ad Networks – They collect inventories, package them based on vertical, context, etc. and sell it to the advertisers in bulk. Price is determined by the ad network’s algorithm.

Ad Exchanges – Ad Exchanges transact ad impressions (not inventories) in real-time based on the user data and some other factors. The price of impressions (CPM) is led by competition in the market.

Ad Networks – The ad networks offer several ways to target readers including RON (Run on all sites on the network), ROS (Run on specific sites on the network), IAB categories (Vertical), Context (keywords), Geo and time of the day, and browser type. As you could see, advertisers aren’t capable of targeting the users here. They’re only targeting the relevant sites, time, browsers, etc. in the hope of finding the right users. This also means your readers won’t bother clicking the ads.

Ad Exchanges – On the contrary, ad exchanges allow advertisers to bid for impressions based on user data and context. The platform facilitates the cookie syncing process, thus, ensuring the right users are targeted with the right ads.

Ad Networks – Ad Networks don’t require any sort of middlemen to monetize. It takes almost 40 percent of whatever you’ve earned through the platform. For instance, Google AdSense, the world’s largest ad network, takes 32% of your revenue for the service provided.

Ad Exchanges – Ad Exchanges require a middleman (SSP) to connect. However, SSPs usually charge anywhere between 10% to 20% in most cases.

Ad Networks – Ad networks wouldn’t be able to fill your inventory completely. Although they claim 100% fill rates, it is occasional and comes with other disadvantages. Especially, your CPMs are lower when you use ad networks for filling your inventories completely.

Ad Exchanges – Ad Exchanges can guarantee you a higher fill rate and the best possible CPMs for your ad impressions. Besides, programmatic solutions like Header Bidding can get you a 100% fill rate without compromising the CPM.

Ad Networks – Ad networks are quite easy to get started. As a publisher, you don’t need to worry about the complex setup.

Ad Exchanges – Ad Exchanges require you to set up ad servers, line items, etc. However, your SSP will take care of the setup and optimization process.

Ad Networks – The ad networks were developed to help publishers sell the increasing inventories to the right advertisers. Advertisers got the inventories across the globe, which in turn, allowed them to reach the audience worldwide.

Ad Exchanges – Ad exchanges were invented to help mid-sized and premium publishers to transact impressions rather than bundled inventories. It helps advertisers to target users, not just context. You can consider ad exchanges as the higher version of ad networks.

Ad Networks – Ad networks are best suitable for small publishers who’re just getting into the world of monetization. They offer decent CPMs and targeting for a beginner.

Ad Exchanges – Ad Exchanges cater to mid-sized and premium publishers. If you’re generating more than a few million page views per month, you can give them a try through an SSP. 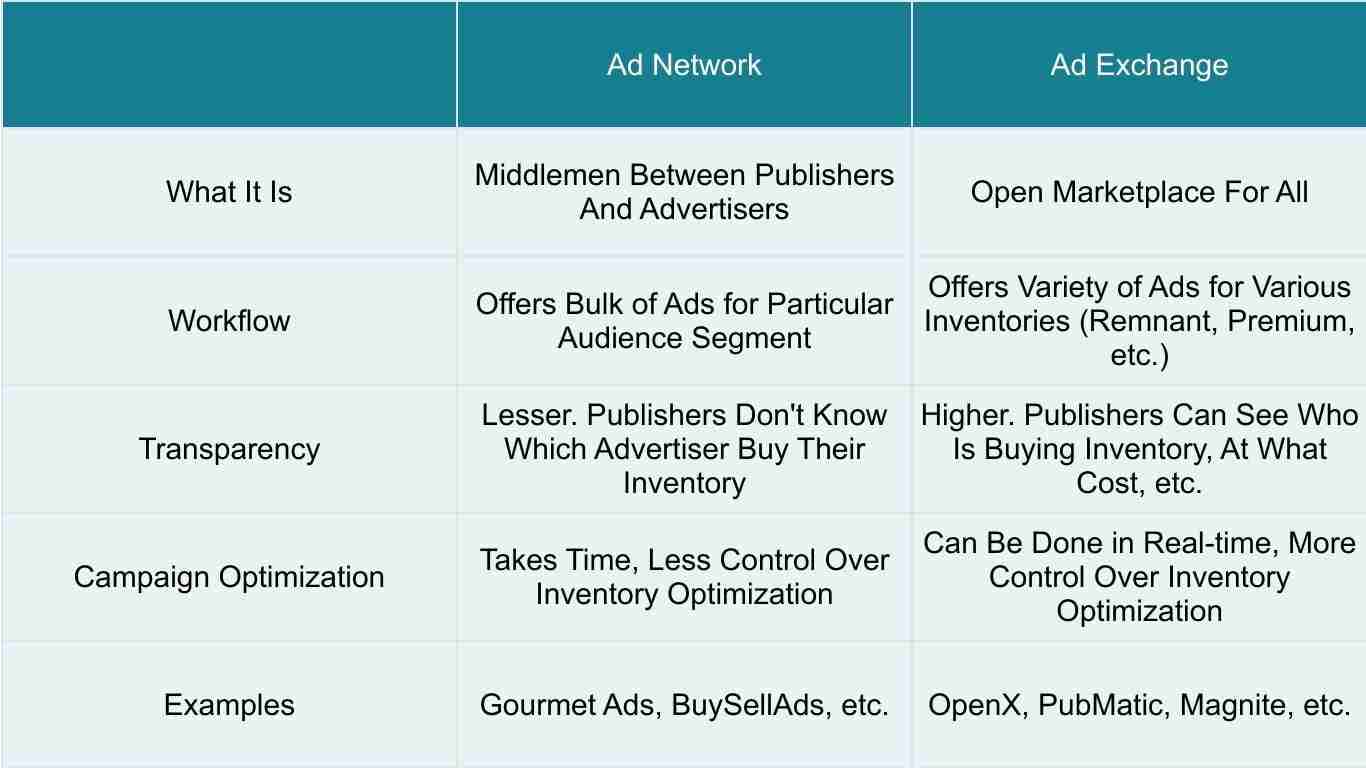 Which one should you choose? Ad Network or Ad Exchange?

We’ve shown you what you need to know in the ‘Ad Networks Vs Ad Exchanges‘ comparison. The ultimate decision is up to you. Consider how you’re going to manage and the user experience before making the switch.

If you would like to grow consistently, we advise you to concentrate on the revenue and user experience as well.  In addition, you can set up an ad network to fill the impressions passed down by the ad exchanges. So, no loss of impression and revenue. Need any help, reach us anytime.

What are Universal IDs and How they Help Publishers?