Automatad Team
Optimizing to hit the threshold percent would yield you the best results.

2 billion – That’s the number of websites existing today. And for most of them, running ads is the only source of income.

For publishers, the aim is to monetize each and every page view or impression at the best possible price. This is where the fill rate comes into existence. Understanding ad fill rates will eventually help you understand how ad network operates and how you can maximize your revenue.

What is Ad Fill Rate?

As much as the site owner wants all ad request to be converted into an ad, advertisers want their ads to serve only to the right audience at the right time.

So, it’s not easy to get 100% fill rate all the time. That being said, you can consistently maintain your fill rate at 100 percent provided you followed all the best practices. Fill rate helps a publisher to understand how their inventory is being utilized and validate the market demand.

A good fill rate percentage conveys the site is monetizing its inventory well and has the right demand partners. That being said, it is important to ensure your eCPM isn’t falling to get your fill rates up. Some publishers compromise eCPM in order to fill their ad placements all the time.

In fact, AdSense, the largest ad network (Alternatives to Google AdSense) has a feature called ‘Ad Balance’ to set your fill rate. Let’s say you set the fill rate to 100, AdSense algorithm will try its best to fill 100% of your impressions.

Similarly, when you set it to 60, it only fills your inventory up to 60%. But this time, it has the leverage of accepting only the highest paying ads as you just need 60 percent to show up. So, there’s no way you could say 100% fill rate yield me the best revenue unless you consider other factors including eCPM, ad quality, and page load time.

Ideally, you should aim to have both higher fill rate and higher CPM. The percent above which your CPM plummets should be the threshold. Thus, optimizing to hit the threshold percent would yield you the best results.

Note: The threshold value isn’t constant and varies based on seasonal factors.

How to calculate fill rate? 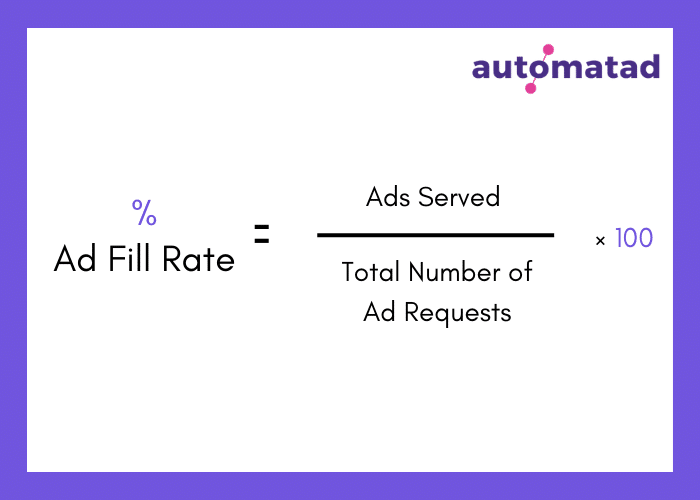 We just said 100% fill rate isn’t always good. But in some cases, the higher the fill rate, the higher the revenue. Every time you fail to get an ad for the pageview, you’re losing revenue. If you need to show an ad, regardless of how much it’s going to pay you ($0.5 CPM or $5 CPM), you need to get the 100 percent fill rate consistently.

There are a lot concerning instances which makes ad your request to return empty-handed.

Adtech is complex and the supply chain is longer than you think. From ad fraud detection to ad verification to post-analytics, there are vendors all around the ad serving system to measure the effectiveness of the ad campaigns.

From the moment a user loads your page to the ads getting rendered, you can witness hundreds of events happening in milliseconds. This means you need to be technically strong and have an AdOps team to minimize the errors.

Site owners are of the view that it is easy for them to sell their ads one way or another. However, this is not possible with most ad networks due to the sole reason that, they do not have enough ads to fill your site.

75.5% of Top 1000 sites have implemented header bidding as per Header Bidding Industry Index.

Some ads may not render on all browsers/devices/OS. The browser might be outdated, the format is not supported by the current version, etc. are some of the reasons.

Make sure you’re running the right mobile ad formats as advertisers want to target users on mobile these days. The best way is to handpick the formats and ad sizes with exceeding demand.

The delay in ad rendering causes the user to leave the page before the ad appears. If your site continues to have the issue (higher bounce rates), demand partners would prefer to display ads on other sites, but not on yours. This eventually leads to lower fill rates.

Some ad blockers block ad networks instead of ad calls. Thus allowing an ad request but preventing ad appearance. At the end of the day, you would see lower fill rates even though you’ve optimized everything.

There are many proven strategies to help you offset the lost revenue.

If the fill rate of a network is high, its eCPM will be low or at the least lower than normal thus explaining why most ad networks have a fill rate between 20-30%.

The prime means of boosting a website’s fill rate is through the use of a reputable advertising network with a wide selection of publishers. A majority of ad networks offer a fill rate of 25-50% which is not only unambitious but also creates difficulty in monetization. This may be due to the sole reasons that they have few advertisers and too many publishers thus creating excess supply (publisher inventories) but not enough demand (advertisers). Thus providing the publisher, a lower fill rate.

If you wonder what’s your average ad fill rate should be, there is no standard answer you could refer to. We recommend you to implement header bidding to capture as many demand partners as possible. This drastically increases your ad fill rate.

Ways to Maximize Your Fill Rate

You can maximize your fill rate by,

Weekly Insights and Takeaways from Adtech delivered straight to your inbox..

How to Get Started On Your First-party Data Strategy?

A Comprehensive CCPA Guide For Publishers