Ads.txt – Everything You Need To Know

A survey done by eMarketer states that digital ad spending will hit $100 billion by the end of 2o23. With various forms of ad fraud being discovered in the past decade, fighting back against it has become a top priority for both publishers and advertisers.

We were in Q3, 2017, when Liane Nadeau, the VP, and director of programmatic at DigitasLBi published an open letter to all the publishers giving an ultimatum that if the publishers do not start using ads.txt, they might lose some of the advertisers, resulting in a decrease in the yield and also claimed that the advertisers will run their ads only on the authorized publishers. But, why was the buying side taking such a strong stand on this?

Arguably one of the most sophisticated ad fraud operations embezzled $3 to $5 million per day from the advertisers during 2016. And, it was up to the publishers to put an end to spoofers once and for all.

Ad frauds are still prevalent and the industry is in dire need to get the supply chain cleaned up. It not only results in a loss for the buyers but also tarnishes the brand image of the publisher and in the process gets the publisher blacklisted and in some cases, they have to shut down.

In order to curb ad fraud, the Interactive Advertising Bureau Tech Lab introduced ads.txt in May 2017. As of now, 92.5% of US publishers have implemented ads.txt on their websites according to a report by AdZerk. 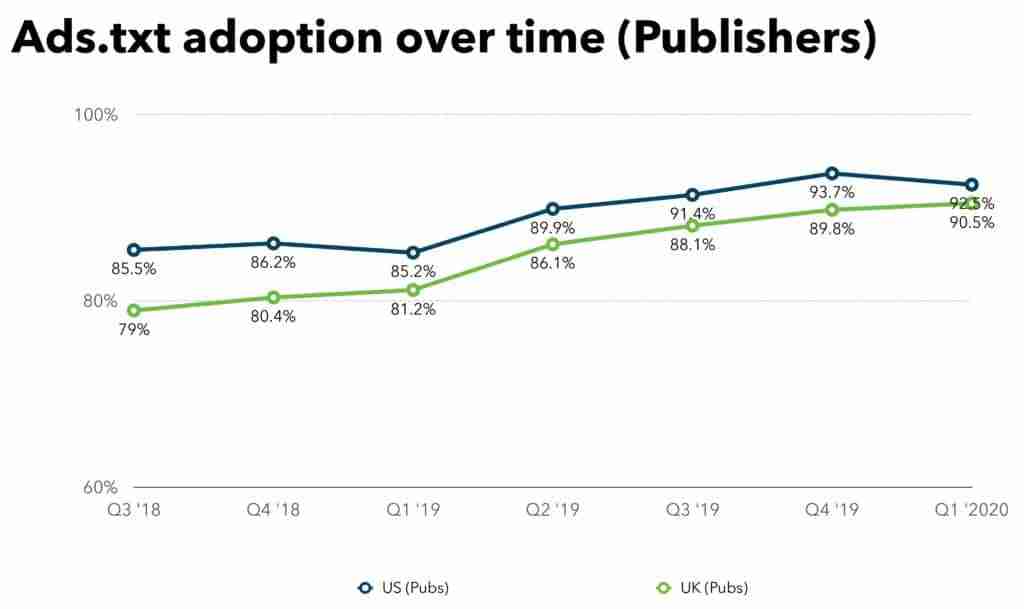 So, what is this ads.txt? We are about to talk about it in detail in this article.

Ads.txt is a publicly available text file where a publisher lists partners authorized to sell and resell its ad inventories on a website. This allows the advertisers to check the validity of the ad inventories they purchase. In the open letter, Liane Nadeau has explained ad fraud and ads.txt with a metaphor.

“It’s a tricky concept. Let’s try a metaphor. It’s a lot like counterfeit bags. You don’t want anyone selling fake versions of your premium bag on Canal Street, as it cheapens your brand and you lose a potential sale. We as buyers don’t want to be duped into buying a fake bag because it’s of poorer quality. So, if you publish a list of retailers that are authorized to sell your bag, we can check it out to make sure we buy one that’s legit. Everybody wins.”

Ads.txt is created by the ad-tech consortiums to mainly tackle domain spoofing, one of the types of ad fraud. Via spoofing or hijacking a domain, an advertiser can be assured that he is bidding for a premium publisher. But in reality, the ad gets displayed to bot traffic of a fake website. This resulted in the trust issues among advertisers and led to blacklisting the publishers. Thanks to the ads.txt file, now publishers can prove themselves as legitimate partners.

How Does Ads.txt work?

When a publisher uploads the ads.txt file to their domain, advertisers* check the file to match the Seller Account ID (Publisher’s ID) to know they are buying from the right publisher. If the ID doesn’t match, it implies that the inventory is not coming from an authorized domain. As a result, advertisers can ignore bidding on the particular domain’s inventories.

*Ads.txt can be seen by anyone. You can check by typing the root domain name followed by “/ads.txt”. For example, www.buzzfeed.com/ads.txt.

As per google, Ads.txt is not mandatory. But it is highly recommended to have one. Having ads.txt can help protect your brand from forged inventories that are intentionally mislabeled as originating from a specific domain, app, or video. Declaring as an authorized seller can help you receive advertisers’ spend without going towards forged inventory.

How to create Ads.txt?

There’s a syntax recommended by the IAB to list the partners and you have to create your ads.txt file by putting every partner into the syntax.

In the end, you’ll get a list of partners represented in a prescribed way.

Here’s how to create an ads.txt file.

How to Implement Ads.txt?

All you have to do is drop a text file on your web servers that lists all of the companies (SSPs, Ad Exchanges, etc.) that are authorized to sell your ad inventories. Similarly, programmatic platforms also integrate ads.txt files to confirm which publishers’ inventories they are authorized to sell. This allows buyers to check the validity of the inventory they purchase.

Here’s a link that contains the specs mentioned by the IAB. Some SSPs like AppNexus and Google Ad Exchange have published documents to make it easier for their publisher partners to implement.

How to validate Ads.txt?

At Automatad, we launched a tool to let you validate your ads.txt file. You can simply enter your domain or upload the ads.txt file you’ve created to validate.

Here’s how to run the validator.

Ads.txt will curb the spoofers but still, there’s a problem. Publishers have to update the ads.txt file every time a new seller has been allowed to sell their inventory. In addition, publishers have to remove the outdated resellers or sellers to prevent any loss of revenue.

As this is manual, ads.txt plus, a blockchain-based solution has been proposed by a private entity. Here’s what you need to know about ads.txt plus.

Sellers.json: An Essential Guide For Publishers

What Ads.txt Files of Top 2000 Sites Tells Us About Programmatic Supply?

Ads.txt Plus – What Should You Know

How To Create An Ads.txt File?

How Publishers Can I...