Let’s say you are buying a book online. You check the price on two different sites and find out that the price is the same on both the sites, but the delivery fees vary by 30%. There can be many reasons behind the difference in the delivery charges — longer route, transportation fees, the involvement of too many transportation providers, or anything else.

But do you care about all these factors? All you want is the best price of the book and timely delivery. The eCommerce site that can fulfill both the conditions gets your order. But here’s an interesting fact. Like the eCommerce site, as a publisher, you’re also selling your inventory to the advertisers. The selling process also follows a route — known as ‘Supply Chain’, and the cost of the ad also depends on the route. Now, do you want to ensure an efficient path, fewer middlemen and lesser fees for the buyers? Definitely yes. But how can it be done? The answer is Supply Path Optimization.

Ad tech is an ever-evolving industry, and Supply Path Optimization (SPO) is the new evolution. 87% of brands, agencies, and DSPs are actively engaged in SPO. At its essence, SPO is an effort to weed out the problem of auction duplication, but it can bring a host of benefits to publishers and their inventory buyers by solving the single problem. Let’s dive deeper.

Header Bidding brought an unprecedented scale to the programmatic advertising process. The buyers and the sellers can work with numerous partners to fulfill their demands and supplies. Almost 60% of publishers work with more than ten exchange partners. But the same scalability also became the reason behind auction duplication. 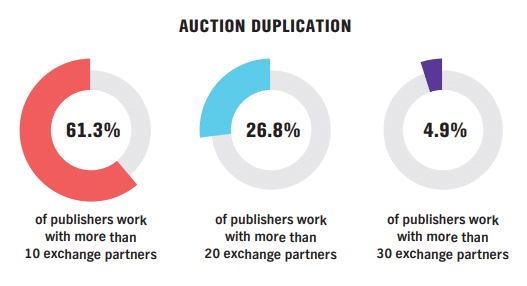 Below is a simplified example of the auction-duplication problem. The advertiser is buying the inventory through Ad Exchange A, B, and C. The same exchanges are connected to a single publisher like you. So, ultimately the buyer is bidding for the same impression through three different supply-paths and competing with itself.

“The average impression in programmatic has been auctioned 15 times before an ad is ultimately served,” 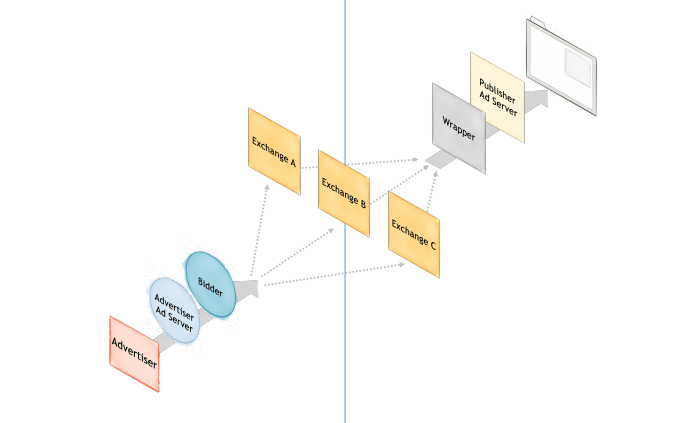 Why doesn’t the buyer stop using two of the ad exchanges and solve the problem? But you have to understand that if the buyer cuts off two of the exchanges, he will get rid of the duplicate and the unique supply from those exchanges. But why should you care about SPO? Read on.

It is a process, typically from the demand-side platforms, via which multiple variables are assessed to drive buyers towards the most efficient buying path.

IAB’s definition of SPO focuses on the buyer. It defines SPO as ‘a process in which multiple variables are assessed to drive buyers towards the most efficient buying path.’  In our example above, the advertiser is facing a loss because of the redundant supply paths. Any effort to improve and optimize this inefficient supply path to reduce the buyer’s loss can be called Supply Path Optimization.

But this looks like an advertiser’s problem. Furthermore, the publisher is benefiting from the inefficient path because the same advertiser is trying to outbid himself. So why should a publisher care about SPO?

Why Should Publishers Care about SPO?

While auction-duplication looks beneficial in the short term, advertisers will eventually stop buying (or at least block some routes) from publishers who send duplicate requests. DSP’s are already using algorithms to analyze the requests before placing their bids. The algorithms help the advertisers to skip redundant bid requests.

This process will become more and more common as the awareness and efforts towards SPO keep increasing. On the other hand, advertisers will prefer to buy inventory from a publisher who can provide an optimized path. So, publishers have an opportunity to attract more demand.

Why is SPO Needed?

SPO has many benefits for the industry. SPO is needed to

Transparency: The ad tech industry suffers from a lack of transparency, and supply chain optimization tries to improve it. The best example of the issue is the recent ISBA study, which revealed that only 51% of advertisers’ spending reaches the publishers. You might think that the remaining portion goes to the other costs like DSP/SSP fees, etc., but no, only 15% of the expenditure goes to the fees, and the remaining 34% remains unattributed. It means nobody knows where this portion goes. Why?

Because the route of an ad from the advertiser’s ad server to the publisher’s ad unit is so complicated that keeping track becomes next to impossible. Had the process been more transparent, it would have been possible to improve it so that more ad spend could reach the publisher.

Fees: Commissions and fees are directly proportional to the players involved in delivering the ad from the advertiser to the publisher. In the same ISBA study we mentioned above, the publishers are getting only half the ad spend because there are too many supply-path parties. DSPs, SSPs, Resellers, Ad Exchanges, and Networks, every one of them take their fees for facilitating the process. A high number of participants means a high cost.

“They normally filter most of the bids and send us only those with the highest probability to win. This technology saves us huge money on server cost.”

Revenue: When the advertisers are using algorithms for SPO, then they bid only for the most relevant inventory. It improves fill rates. The win-rate comes up as well. Eventually, the cost comes down for the advertiser. In the long term, when an advertising entity saves money, it reinvests the amount to get more returns. Ultimately, the advertising budget reaches publishers like you. An optimized path will make sure that you receive larger chunks of the investment and the reinvestment.  Hence, SPO means better revenue for you.

Ad Frauds: Shorter supply paths with limited and trusted players reduce the likelihood of ad frauds. It is easier for fraudsters to dupe the system when the supply path is long, and the number of involved parties is high. It won’t be surprising if a large portion of the unattributed ad spends in the ISBA study falls prey to ad fraud.

As we said earlier, any efforts made to reduce the inefficiencies of the supply path is SPO. Anyone can make these efforts, be it an advertiser, a publisher, an SSP, a DSP, or any other parties in the ad tech ecosystem. Here are some industry initiatives towards supply-path optimization:

Sellers.json: It is the SSP’s version of the Ads.txt file. It lists the resellers authorized by the SSPs. The sellers.json, too, prevents the unauthorized sale of the inventory.

Removing Aggressive SSPs: While solutions like Ads.txt and Sellers.json are industry standards, there are Ad Tech companies that are doing SPO at their level. AppNexus tries to weed out SSPs that are costlier than others. It stops buying from the SSPs as soon as it spots the difference.

As the number of intermediary SSPs decreases, the advertiser sees better results from the publisher. Advertisers shift their ad spends towards publishers that yield better results. You can see how the overall ad spends increased on the publisher’s site despite an average CPM in the AppNexus experiment in the image below: 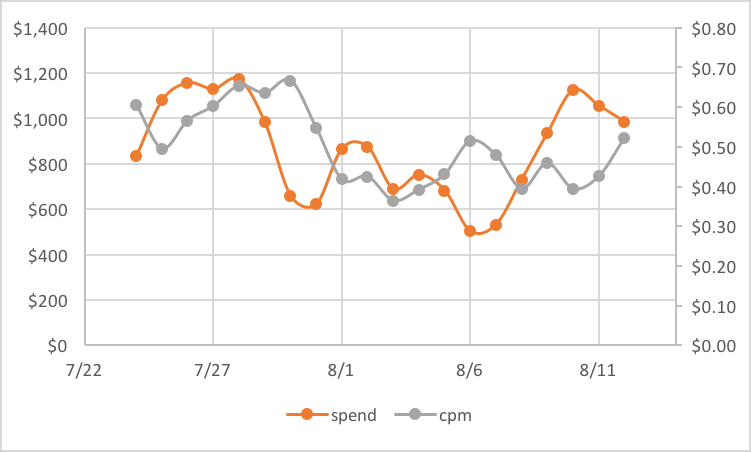 Using a single path: Avoiding multiple routes to buy or sell the inventory is one of the most potent ways to implement SPO. Recently, The Trade Desk asked its SSPs to choose a single supply path to premium inventory. When there’s only one path, then there’s no chance for auction duplication. The DSP’s operational cost comes down as it has a lesser number of bid requests to process. The process becomes more transparent, the advertiser saves money, and the more money reaches the publisher.

The current State of SPO

SPO is becoming one of the top priorities of the industry. As per a study conducted by Pubmatic and Digiday, 45% of the buyers are actively implementing SPO. 60% of the buyers want to find the most effective SSP path to the publishers. The significant objective for the buyers is to reduce the fees. 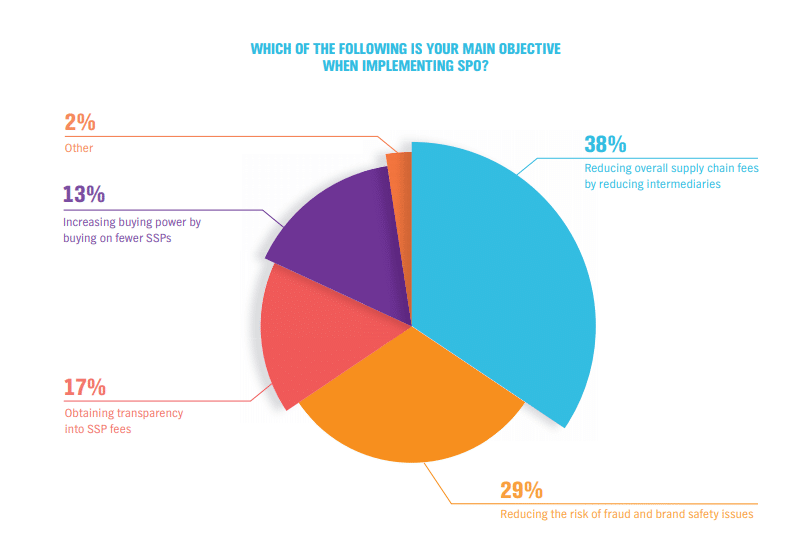 56% of buyers believe that SPO has reduced fraud and brand safety issues. 46% have seen improved KPIs. Buying power has been enhanced for 31% of the buyers, and 17% witnessed more SSP fees transparency. 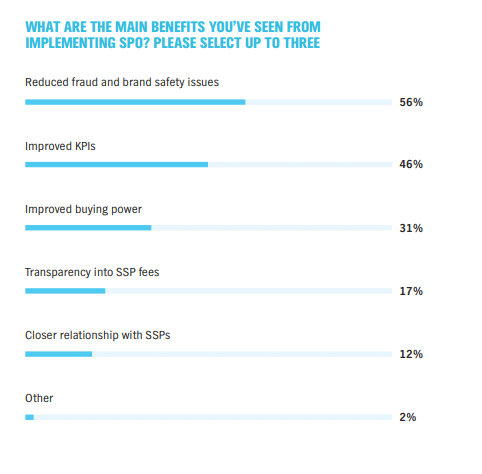 With so many benefits, SPO is bound to attract a lot of attention in the ad tech industry.

What Should You Do?

The advertisers, DSPs, SSPs, and all the other players in the industry are doing SPO as per their capacities. You can do the same. Here are some suggestions for you:

The SPO movement will keep gaining heat because of rising complexities in the ad tech industry. The buyers will push for a direct and short route for their ads. The publishers with unique and premium supplies will always have the upper hand in the game. If your inventory is in demand, then the advertisers will find ways to reach it. The buyers will prefer you more when you can offer your inventory through an optimized path.

But SPO is not the end of the story. There’s another similar trend called Demand Path Optimization, approaching the industry. DPO will help publishers in preventing their inventory from getting sold at less than optimum rates. While SPO starts from the advertiser’s end, DPO starts from the publisher’s end. We’ll talk about DPO in our upcoming article. Till then, stay tuned.

What Is SSP Log Level Data? And How You Can Use It?

A Publisher’s Guide to Working with Supply-side Platforms