As you are here, we assume you want to learn programmatic advertising and how it has evolved over the years. If you’re familiar with the jargon, and just want to know the resources to keep up with ad tech, then scroll down to ‘best ad tech/programmatic learning sources’.

For those who have decided to see how programmatic helps buyers and sellers, we’ll start with a bit of history.

Ads have always been the main source of income for publishers. Even when there was no internet in the world, the publishers used to sell the space in their newspapers and magazines to advertisers. When the internet came into the picture, the same practice brought revenue to web publishers.

In the initial days of the internet, there were not too many websites. Advertisers who wanted to promote their products or services contacted the web publishers directly and asked them to place the ad on the sites. The sales team inked deals with publishers manually.

Even when there were not many websites and internet users, the process of setting up an ad campaign was long and difficult. The publishers had to rely completely on their sales team to bring advertisers for running ads. But as you could imagine, it is almost impossible to sell all your ad spaces to advertisers directly. Even the best sales team can’t find as many advertisers. For example, let’s say you have 4 ad units on a page and you generate a million page views per month, you need to find advertisers to sell 4 million ad impressions.

Typically, publishers sell whatever they could and let ad networks take over the rest. Yes, ad networks connect publishers with remnant inventories (remaining impressions) to advertisers. ‘Google AdSense’ is by far the largest ad network for publishers but there are many alternatives.

When the internet grew larger with millions of websites and billions of users, the manual process became impossible and hence Programmatic was born. Programmatic advertising brought automation, and the ad buying process became so fast that what used to take days now happens in seconds. This is why it is now the default mode of operation for publishers as well as advertisers.

Programmatic advertising refers to the process of selling and buying ad spaces on the open web (websites) and walled gardens (think, Facebook, Twitter, etc.) using software — rather than relying on sales team to find sites, negotiate, and draw contracts to run digital ads.

The demand for ad inventory can come in many forms.

It can come from a single advertiser with whom the publisher has made a direct deal. In the direct deal, if a publisher guarantees to serve a certain volume of ad impressions and the advertiser agrees to buy it for a fixed CPM, then it is called ‘Programmatic Guaranteed‘.

The demand can come from a marketplace where more than one advertiser are competing for your inventory through real-time bidding (RTB). Publishers generally use sell-side platforms (SSPs) to connect to multiple ad exchanges at once and sell their impressions programmatically via real-time bidding protocol. The real-time bidding can take place in various scenarios. It can be carried via Private Auctions, Ad Exchanges, or Header Bidding.

Private Auctions – Also known as Private Marketplaces (PMP). Here, the publisher allows a selected number of advertisers to bid for the inventory before it becomes available in the open marketplace. 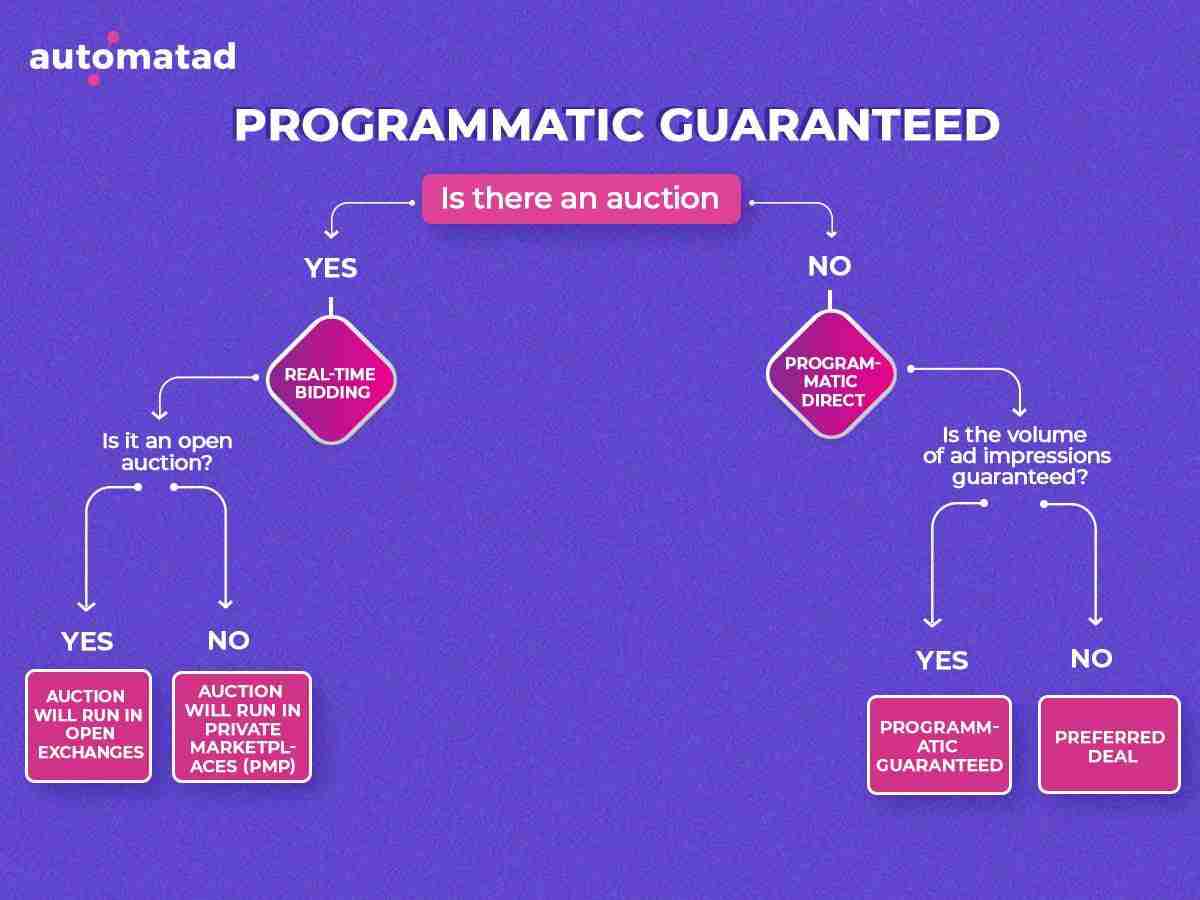 Ad Exchanges – Ad Exchanges provide an open market setup where many publishers are selling their ad inventories and many buyers are bidding for these inventories. Just like the stock market. For simplicity, you can say it is a higher version of ad networks (know the differences in detail).

Header Bidding – It scales the ad exchange bidding to the next level. In header bidding, you can connect and receive bids from multiple demand partners (exchanges/SSPs) simultaneously, which further intensifies the competition for your inventory. More competition leads to more bids, more bids lead to more ad revenue. In all the scenarios, the winning bidder gets the opportunity to show the ad.

Today, when you open a webpage, then the ads which appear in front of you are delivered to the ad units by an ad server. The ad server decides which ads should be shown to you among the multiple available ads (typically, based on the price the ad would pay for the impression). Apart from serving ads, the ad server can do many complex tasks.

To summarize, an ad server helps to create ad space, manage ad campaigns, and optimize them. All the bids from demand partners (coming via Open Marketplace or Private Marketplace) will be sent to the ad server and the server will make the final decision and deliver the ad to the user.

But what motivates the demand partners to bid for every single inventory? What makes an ad spot more valuable than the other? The answer is – User Data. For an automobile business, it is more important to show its ads to a user who is interested in cars, rather than showing it to a user whose main interest is gardening. Therefore it makes sense to bid higher for the former user than the latter one.

So the advertisers and the publishers need data to identify and target users, and this is where the Data Management Platforms (DMPs) come into the picture. DMP tracks and collects user data across different websites to understand the interests of the user. This data is then utilized to show the right ads to the right user. Please remember that DMP is not the only source of targetable data, CDPs, CMPs, and even SSPs also help a lot in targeting. Because they all cookie users’ devices to identify them later.

During the whole process, you must have observed that the buyers are bidding, targeting using data, sending creatives, etc. Demand Side Platforms (DSP) are used on the buyers’ end to make all such operations possible. 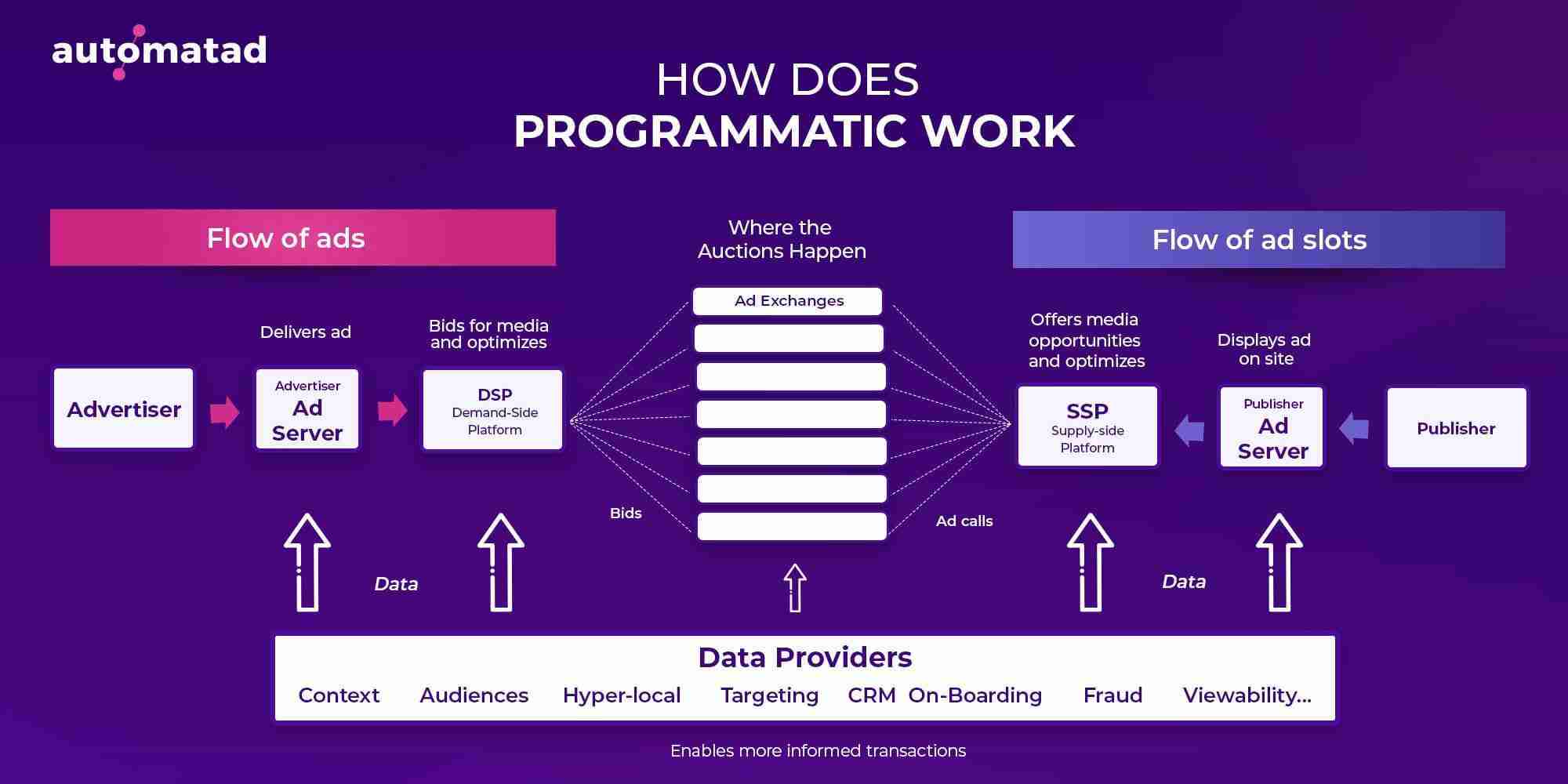 This was the journey of an ad in the programmatic world explained in the simplest form. The publisher makes the ad inventory available with the help of an SSP. The ad starts with the buyer’s end. The buyer uses DSP for targeting. The data for targeting comes from DMP and SSP. The bidding takes place in a private marketplace or in an ad exchange or across multiple ad exchanges in case of header bidding. The winning bidder ends up serving the ad on the publisher’s website.

With the help of Programmatic advertising, the whole process explained above takes place in a matter of milliseconds. But this was just the basic explanation, in reality, there are thousands of elements involved in programmatic ad serving. You need to know hundreds of jargon and technologies which cannot be learned in a single day. To solve this problem the Decode Series, a Free programmatic learning resource, helps learn one jargon at a time.

But the programmatic industry is always evolving, new technologies and jargons emerge all the time. You have to be aware of all the latest updates in the industry to be a pro. To stay updated, the Adtech Weekly Roundup is the best source. You can subscribe to the newsletter if you do not want to miss it.

Only knowing the concepts and being updated with the news wouldn’t help you to become a big publisher. You need to learn how big names like Buzzfeed, Pitchfork, Forbes other renowned publishers scaled up their businesses. To learn their scaling process, you can read the Becoming Series, which is exclusive in the whole industry. This free resource will help you formulate your own strategy to take your publishing business to the next level.

But these are not the only sources for publishers to learn programmatic advertising. Here are some industry-leading information outlets for you:

MediaCrossing’s Digital Media Glossary – For understanding the various terms in the media industry.