Ad Network – The 2020 Primer For Publishers

Ad Network, a piece of technology developed to connect your inventory with the right advertisers at scale.

We agree. Being a publisher isn’t a typical day job. And, growing an engaging audience and getting the attention in this crowded market [online publishing] is easier said than done.

Isn’t it great to have the technology to earn you rewards for the work, blood, sweat, and tears?

What’s worse? Your day doesn’t end there. You need to get the advertisers to pay for the impressions. Obviously, the paywall wouldn’t work for most of the publishers.

If you’re in the 90s’, your direct sales team can sell half of the available inventory (we’re being optimistic) to the advertisers quite easily. Because advertisers were not choked with the throng of publishers to choose from.

Let’s get back to reality. There are almost 2 billion websites online today, compared to thousands of websites in 1995. And, even if you’re a premium publisher with the targeted audience, it’s impossible (or nearly impossible) to get advertisers to pay for half of the impressions you generate every month.

Especially, mid-market publishers are left with little to no advertisers to partner with.

That’s just one side of the coin. If you flip it, you can see the thousands of businesses and SMBs looking to market and advertise their products and services online, but didn’t get the reach they need.

Ad Networks is simply the technology to solve the very problem we just discussed. They help advertisers to reach their audience across the globe and let publishers sell unsold or remnant inventory.

What is an Ad Network?

Ad Network is a piece of technology that bundles the remnant inventories from the pool of publishers and sells it to the highest bidders at scale.

A well-known example is Google AdSense. Google AdSense is the most popular and has over 2 million publishers in its ad network program. When you join Google AdSense, your readers will be served with ads targeted contextually from the advertisers utilizing Google Ads (previously known as Google Adwords). 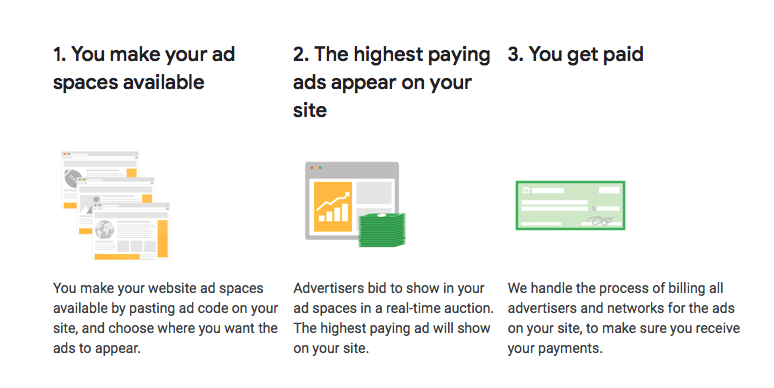 How does an ad network work?

In a line, ad network packages your inventory based on a target criteria (say business, transportation, etc.) and sells it to advertisers.

We can classify ad networks based on user reach, inventory quality, and inventory type.

When it comes to user-reach, certain ad networks can reach almost 90% of the global internet users while others can only cover 10% to 20% of the total users.

1. The ad networks which are capable of reaching the majority of the internet users are called First-Tier Ad Networks.

Ad networks can also be grouped by the quality of the inventory they offer to the advertiser.

2. The ad networks with limited targeting capabilities and a generic pool of publishers are known as Traditional ad networks.

Most of the ad networks have improved their capabilities and developed a strong approval process. So, it is safe to say traditional ad networks are nearing their extinction.

Some ad networks offer particular inventory (say display, video, in-app, etc.) to the advertisers. You can partner with them to monetize your content accordingly. Typically, online publishers partner with display ad networks to experiment and see the results.

What’s the problem with ad networks?

As you know, ad networks benefit both the advertisers and publishers. But, it’s not a panacea. As with everything else in adtech, ad networks have their own drawbacks.

Everyone seems to talk about how ad networks benefit publishers to earn thousands of dollars every month. Though that’s all well and good, it is essential to know the dark side of the technology to make informed decisions and pick the right ad network.

Targeting capabilities of ad networks play a vital role not only in your CPMs but also in advertisers’ ROI. Ad networks offer various targeting and decision-making features similar to an ad server.

As a publisher, choose an ad network that offers granular targeting to the advertisers. This way, you will yield better CPMs and expect relevant ads as well.

The Future of Ad Networks

In adtech, the current trend is to be-all and end-all of whatever you do, be it an ad network or ad server or anything else. And, we’re experiencing a growing consolidation in the adtech space which further complicates the future of ad networks.

Ad networks have started to make themselves desirable by offering advanced managing and optimizing abilities for publishers. Without a surprise, they have developed different variants to cater to different publishers.

Premium publishers can avail the premium demands and beginners have their advertisers too. The trend is continuing to blur the line between ad networks and SSPs.

From a publisher’s perspective, both may look the same – Helping to sell the remnant inventory. The truth is they’re completely different.

SSP (Sell-Side Platform) is a programmatic technology that offers your inventory to the multitudes of buyers either directly (PMPs, Programmatic guaranteed) or through an open auction (Real-time Bidding).

They have the capability to drive your CPMs up by simultaneously calling all the bidders (who aren’t available in the ad network) at the same time, ignoring the waterfall setup in your ad server. The process is termed as ‘header bidding’.

If you’re a mid-market or premium publishers, an SSP can fill your inventory with the help of header bidding and can substantially increase your ad revenue (See for yourself). If you’re a long-tail publisher, you can start with the best CPM ad networks.

Consider some crucial factors such as targeting, inventory quality, acceptance rate, and moderation process to get the best CPM and deliver a better user experience as well. Remember, there’s no one-size-fits-all solution in adtech. We advise you to experiment with the best ad network and then, decide the setup.

Did we miss anything? Let us know in the comments.