Automatad Team
“The number of independent ad tech companies has fallen 21 percent since 2013, to 185 as of the second quarter of 2018, according to LUMA Partners, which analyzes digital media and marketing.”

Stepping into a new era?

We know this isn’t the first time you’re hearing about adtech consolidation from us. In our last roundup, we discussed how Amazon is planning to unify all of its advertising platforms (from AAP to AMP) into a single platform.

The benefits are obvious. A buyer can advertise, monitor, and optimize the campaign on Amazon network using the same platform.

Last week, The New York Times published an article to further solidify the concept in practice.

“The number of independent ad tech companies has fallen 21 percent since 2013, to 185 as of the second quarter of 2018, according to LUMA Partners, which analyzes digital media and marketing.”

1. The advancement of programmatic advertising (think, header bidding) has led to the proliferation of adtech companies in the last few years. It’s time we start maturing. And, as per LUMA partners, maturing cycle in adtech essentially means ‘consolidation’.

So, you should start considering two factors while assessing your partners: ‘Versatility’ and ‘Roadmap’.

2. The consolidation may dilute the digital advertising spend on the walled gardens. However, it doesn’t mean the open internet will hoover the dollars. We can expect to see more giants in the field (no more duopoly).

We believe improving quality will help you in the long run.

“The dynamics of the market may be changing, but it’s stemming more from people’s shifting consumption habits than one platform’s popularity.”

Follow the readers all the time; never lose track of them. The platforms, advertisers, and standards evolve based on consumer habits.

Amazon listens to the advertisers

Advertisers promised to direct their marketing budget to Amazon once they have more video options available. Guess what happened?

Amazon is testing a new video feature where relevant video ads are shown to the users on the search results.

Dubbed as ‘video in search’, advertisers can use the new ad product to direct the users to the custom landing page or a product page on Amazon. The video ad is now in beta and reportedly used by some of the Amazon’s biggest advertisers including Procter & Gamble, Gillette, and Lamps Plus. 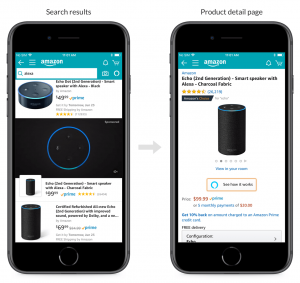 We all have to admit that Amazon has been listening and continually improving its advertising arm. With the $2.2 billion Q2 revenue, it’s no surprise to see the new products. Video in search is only for the users searching through iPhones and iPads and will be rolled out to all the other devices soon. We speculate the product might be mobile-exclusive.

“The application of blockchain in advertising is still very nascent, and so while it’s being explored, we’ve only had a handful of inquires about it [from advertisers].”

In our blog, we’ve published an article on ‘Blockchain and Adtech’ with a goal of answering a question.

Is it possible to use blockchain to address the burning issues of adtech?

And, we showed you the answer. Last week, Digiday dived into the same matter to see the potential of blockchain in the near future. The result was pretty much the same.

“Blockchain falls somewhere between a game changer and a gimmick in the eyes of some ad industry observers now.”

As usual, the processing capacity of the network is still in question. Blockchain can process thousands, we need millions. The difference is huge and we’re not seeing anything on the horizon to improve the processing speed.

The next issue is standardization. Take GDPR as an example. We see a lot of publishers and advertisers complaining about the way law has been interpreted and implemented. So, they don’t want to create a mess by inviting blockchain tech into the ecosystem before the consortiums settle on a standard.

Last but not least, infrastructure and costs. Do you think that it is wise to invest in billions while everyone is still wary of the tech (in adtech) itself?

In case you didn’t know, last week Index Exchange, a well-known wrapper provider has been called out by AdExchanger for tweaking its algorithm.

Index Exchange published an article titled “Our Commitment to User Experience” where it described how the exchange has been leveraging ‘bid caching technique’ to let publishers deliver a better user experience for their readers.

Bid caching is the process of holding up the bids sent by the buyers and using it for subsequent auctions. Thus, reducing the number of ad calls made for the user. It might sound like a good idea for publishers and users.

In fact, Topix, a news publisher has been caching their bids to improve the user experience.

Now you might wonder why Index Exchange was criticized for ‘bid caching’. If a publisher can implement it, then why not an exchange?

Because Topix did it the right way. The publisher disclosed that it has been caching bids only for some seconds (20 sec) and will plunge the bids if the user is viewing a different slideshow. So, the cached bids are used when the user stays in the same URL.

On the other hand, Index Exchange which has a dominant market share hasn’t revealed the process until last week. Hence, buyers have started raising questions against the process.

Buyers are bidding for the impressions in the particular URL. If bid caching is implemented, the same bids can be used for other URLs too, which puts the brand safety in question.