Automatad Team
Whether we like it or not, we will end up with some unsold ad impressions all the time. So, what's the ideal backfill setup to maximize fill rate and revenue?
Share Tweet Share

While programmatic technologies and strategies change rapidly, one thing that remains constant for both publishers and advertisers is that every impression counts. In general, a publisher tries to sell each ad impression at the best possible price. However, a portion of ad inventories remains unsold due to several reasons. Let us take a few cases and see what’s the best backfill setup for each scenario.

What do remnant ad impressions mean?

Usually, publishers will sell their ad inventories to the advertisers at premium CPMs. However, there will be some ad inventories that are left being unsold because of many reasons. Those inventories are called remnant ad impressions.

Case I: You are a publisher with a direct sales team. And, the team couldn’t sell 100 percent of the ad inventories via direct deals. Even with AdSense, you still are leaving money on the table.

Case II: You are a publisher with Ad Manager, AdX, and AdSense. You are wondering how can you go further.

Case III: You are a publisher with a waterfall set up to sell the remnant ad inventories. Since the traditional method calls the ad networks and exchanges sequentially, the ad networks (at the bottom of the sequence) might find it difficult to buy relevant impressions and so, your setup isn’t efficient enough to maximize fill rate. Else, it could be possible that the ad networks might have limited advertisers’ reach.

So, what should you do to fill the unsold inventories in order to reach your ad revenue potential? This is where ‘Backfill’ makes an entrance. A backfill (also known as passback) is the term that can be given to any advertiser, yield group, demand partner, or even an in-house ad. In simple terms, any of the mentioned channels used to fill the unsold ad inventories on a web page is known as a backfill.

How can a publisher backfill an unsold ad inventory?

AdSense is undeniably an excellent ad network for small to medium-sized publishers that helps to sell the ad inventories. But, like other networks, it doesn’t offer a 100% ad fill rate. And, due to this reason, many publishers get an Ad Manager account to integrate more demand partners, manage the advertising channels, and serve ads on the website.

Since Google Ad Manager is the most widely used ad server by the publishers, let’s take it for our cases and find the best set-up for backfilling ad inventories.

For a publisher who gets 500k – 1 million website visitors every month, direct deals can work to an extent. Eventually, you would be selling the remaining ad inventories via AdSense.

The best part is, Google Ad Manager not only serves ads on behalf of publishers, but it also manages and optimizes your demand to help you get the best possible revenue. So, if you are in the present scenario where AdSense isn’t filling all the inventories with ads, why not get a few additional ad networks and set up a waterfall?

For the beginners, here’s what you can do:

You can also prioritize one demand over another.

Note: Check with your ad networks if they are compatible with the priority orders. To know more line item priorities, read the article here.

If there is no ad network that can deliver the ads on the inventories, you can serve your own ads, or AdSense ads by declaring it with a priority order of “House line item”. A House line item can only serve when none of the line items (in this case, ad networks) are available to deliver an ad, and it is often the last choice as a backfill ad impressions option for publishers.

A house ad can be typically an ad that helps you promote your own products and services.

Here’s an example of a house ad run by ESPN. Since the publisher has no other ads to display, the inventory was used to promote one of its video programs. 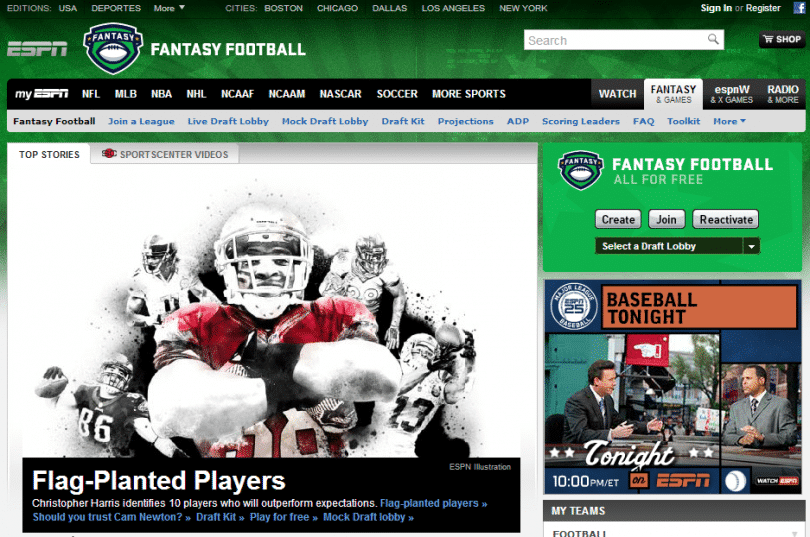 Since you’ve reached this part of the article, we assume you aren’t a publisher with just AdSense and Google Ad Manager. You got into Google AdX. So, let’s get into the option that involves Ad Exchange in the ad selling process. Google AdX is the largest ad exchange in the market and it typically accounts for more than 50% of the revenue made by mid-sized publishers.

Considering that you already have Google Ad Exchange linked to your Ad Manager account, Google now picks AdX or AdSense randomly to compete for the ad impressions. Since they can’t compete with each other directly, Google will choose one for an auction.

You have three options:

There’s another way as well. If you want to let AdSense backfill across your network, then click on Inventory > Network settings and select Maximize revenue of unsold inventory with AdSense.

However, just having an ad exchange in place doesn’t assure you that all the inventories will be filled. A waterfall setup can still leave unsold inventory in your ad stack. As a consequence, header bidding was introduced. It can increase the fill rate by connecting you with multiple demand partners at the same time and selling the ad impressions at the highest possible CPMs.

So, here’s the best setup that can be used to fill the remnant inventories.

A quick recap: Header bidding is a technique that enables publishers to make the Guaranteed and Non-guaranteed line items compete against each other in real-time. Unlike a waterfall setup that calls network A first and then B and then C and so on, header bidding sends an ad request to all of them at the same time and sells the impressions to the highest bidder.

The best possible way to set up header bidding is to follow the below course of action:

What if you are a publisher who has implemented header bidding to sell ad impressions via open auctions? You might not be able to fill the inventories with ads because none of the demand partners return bid responses within the specified time or had no valid ad creatives. Yes, you need to have a backfill even with header bidding. While it is very less likely to happen, we need to have a backup plan in hand for the worst scenario as well.

So, if the buyer returns no ad, Prebid passes the empty response to the ad server. Then, the ad server looks for the eligible line items (including AdX) to serve. In case if you find no line item to serve, you can run an AdSense as the backfill. We already saw how to set up AdSense as a backfill above.

Sidenote: If you are using Exchange bidding (an S2s header bidding), you can still use AdSense as the backfill. But we suggest you move the best demand partners to the client-side as it facilitates a better match rate, resulting in a better fill rate.

What can you do when backfill networks are also not filling the inventories?

Through serving a “Backup ad”. Google Ad Manager enables you to serve Backup ads for the inventories that have no ads to display. However, the catch is a Backup ad that can either be a static image or an HTML page. Via selecting a static image, publishers can show ads in GIF format from any other URL.

By HTML backup ads, you can upload an HTML page that is clickable and redirects users to any other link. This can increase the engagement of a page as well as can help you get impressions on the page you redirected them to.

Note: This feature is only accessible for the publishers who have access to the Google Exchange demand.

This is how you can create a backup ad in Google Ad Manager:

Repeating again, the backfilling of a remnant ad inventory can be done by any advertiser or demand partner. All it requires is passing their ad tags as passback in the setup. There are a few publishers who even run affiliate marketing banners on their unsold inventories.

Give the set up some time and see the results. Done with all these changes but still, the revenue is low? Give us a shout here and we’ll help you to optimize your setup.

Unfilled Impressions in Google Ad Manager and Ways to Reduce them