Automatad Team
Ad viewability is one of the most crucial aspects for publishers to understand before they start monetizing their website with video ads. Let’s explore the basics of video ad viewability, its impact on revenue and tips for optimal results.
Share Tweet Share

Video remains a very lucrative (and competitive) space for brands to advertise in. With the advent of various video ad formats such as pre-roll, mid-roll, and post-roll, video is now witnessing increased adoption.

Video ads allow for more brand interaction than traditional banners, resulting in better ROI for advertisers and higher eCPM for publishers. Although the benefits of video ads are prevalent, viewability is a significant concern for publishers as it directly impacts their revenue.

Years ago, standardized metrics were lacking and the debate over what even constitutes a viewable ad continued to rage. Advertisers constantly argued if it was the right metric to measure, meanwhile publishers were trying to figure out if viewability would be an amenity or a must-have.

Why Is It Important to Measure Video Ad Viewability?

A couple of years ago, advertisers believed that the goal of measuring viewability and its importance lay in brand advertising. In fact, there are several research studies that prove a correlation between how long a video ad is viewed and an increase in awareness and consideration.

But gone are the days when viewability was only considered for brand awareness. According to a study by Google, ads that are viewable and audible have higher conversion rates than ads that are just audible.

“Increasing the viewability of your video ads from 50% to 90% can result in more than 80% revenue uplift (averaged across desktop and mobile sites).”

According to the Media Rating Council (MRC), a video ad will be considered viewable when 50% of the creative is in view for at least 2 seconds. 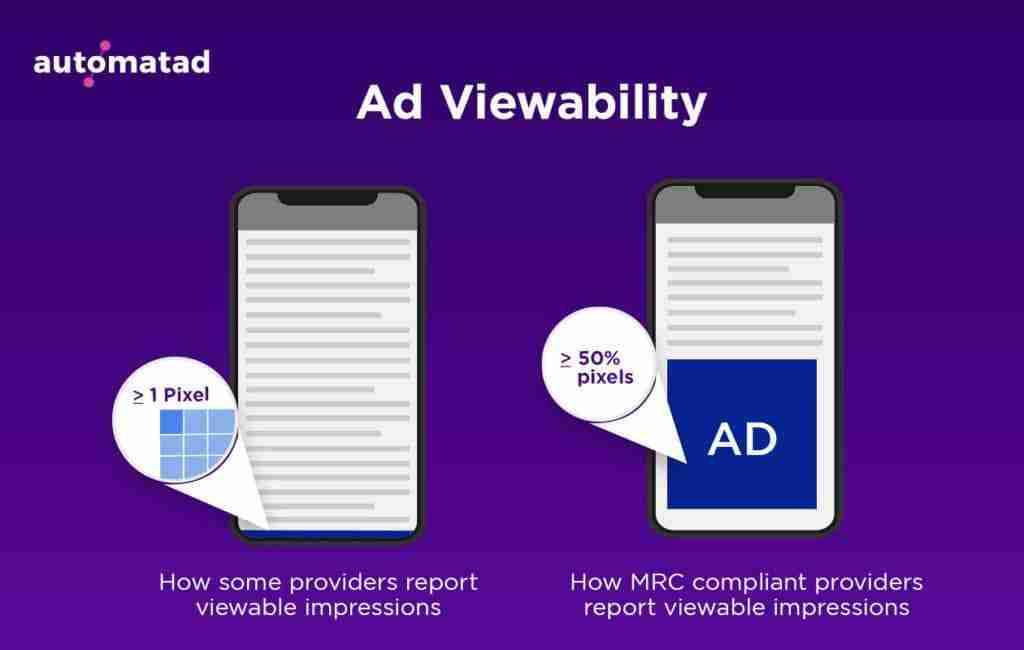 Now that viewability has become an established video ad metric, advertisers are looking for opportunities to take it one step further. This is where demand for different viewability metrics comes into play.

How to Measure the Viewability of Video Ads?

Like with display ads, video ad viewability can be measured through Google Ad Manager and various ad verification solutions provided by third parties.

In Ad Manager, Active View is a built-in feature that allows you to analyze the viewability of your ads across the website and in-app. Under the “Historical” report, various Active View metrics give you information on how many impressions have been viewed as well as for how long, and so on.

Here’s how to create a simple ad viewability report in Ad Manager:

“[Active View] is the one solution that is in-server and will accommodate video and mobile.”

The placement of your video player has a lot to do with how many people are watching your videos. Most choose a key page, like their homepage, and put the video player there. Do you have any other web pages where you could place a video player? Maybe a page that gets just as much traffic as your homepage. If yes, then use the ad inventories for video ads.

Next, there’s a common misconception that the top center of the page is always the best position to place your video player. While this may have been true in most cases as video ads above the fold not only maximizes viewability; it also increases overall watch time and user engagement. But in some cases, placing a video below the fold could actually increase the number of people who watch your video.

To find the ideal video ad placement, change the location of the video player on the website, test the set-up, and understand if the viewability rate changes and the percentage of increase or decrease.

If you are creating video content, think about the type of audience that would watch the video. If they’re not interested in your topic, they won’t stick around and watch your entire video (and mid-roll/post-roll ads). Make sure you’re giving the right video content to the right audience. Your goals for each video should be to provide value to your viewers and keep them engaged to increase the ad viewability.

Wondering how to serve relevant video content on your website? It’s quite straightforward with Google’s ad server. While setting up the video ads in Ad Manager, you can select Content targeting and target video ads to specific video content. Here’s a detailed tutorial to do it.

It’s easy to get obsessed with view-through rates, but the size of your video player can make a big difference in the performance as well. First and foremost, video players that are visible on viewport make a huge impact on viewability. On top of that, bigger players further increase viewability rates. Thus, the larger the video player size, the higher the advertisers bid.

Please note that video player size matters but the placement of video ads matters the most. There’s no use in having a large video player in a section that users can’t see. So, ensure the video player is placed at an appropriate location.

Large file sizes make users wait longer. In addition, video players with slow load times significantly decrease the chances of users continuing to watch the video. If your videos are constantly buffering, or if your website takes too long to load, then there are fewer chances for the users to view your video content and ads inside it. So, ensure that your website is fast and responsive. Here’s a detailed guide on how to optimize loading speed of your website.

Sticky ads are a great way to make use of vertical space, without interfering with the scroll behavior of users. You can make video players sticky to improve ad viewability. Ensure read the policies of sticky ad units and test them before implementing them across the website.

A cross-domain iFrame is an HTML document embedded in a web page from a different domain. One of the challenges with ads embedded in cross-domain iFrames is measuring the viewable impression due to the ‘Same Origin Policy’. The Same Origin Policy works great when it is blocking XSS (cross-site scripting) in your site but it hampers advertisers that are trying to verify viewable impressions.

Therefore, we recommend running fewer ads inside cross-domain iFrames that aren’t viewable-friendly. Instead, we suggest you run ads inside of friendly frames like SafeFrames as these iFrames are viewable.

Click-to-play is a feature that allows the viewer to choose whether they want to watch an ad. Such video content is not played immediately and requires the viewer to click or tap on the content before it will play.

Because they must actively choose to click them, Click-to-play increases the video ad viewability substantially. Moreover, it also prevents auto-play from firing sound, which creates a negative impression of your website.

Bonus Tip: Autoplaying video ads are increasingly popular because of the increased exposure that a visitor has to your page when they land on it. Make sure an auto-play video ad is muted at all times unless the user unmutes it. Check out Chrome’s autoplay policies before implementing them in order to avoid a sub-par user experience on the website.

Can viewability do wonders for your revenue? Yes, it can! Now we just need to start putting it into action.

As you begin to learn how to make video ads work for you, you quickly realize that viewability can be a powerful ally. When you implement the suggestions listed above, you’re taking the first step to gaining a competitive advantage. Your users get a pleasant and engaging experience while the conversion rates increase. Because if you fail to keep your users at the forefront of your mind, everything else won’t matter.

If you’re interested in how Automatad can help you increase your ad viewability without hampering the user experience, be sure to contact our team here. We’ll be happy to help you.

What is Banner Blindness and How Can Publishers Reduce it?