Automatad Team
Ad viewability has emerged as one of the most important prerequisites for you to optimize your ad revenue and not lose profits owing to non-viewable ad impressions. However, the industry has a relaxed definition when it comes to mobile web ad viewability. Let us take a look at what mobile web ad viewability means, the challenges it faces, why it is important, and how you can try to improve it.
Share Tweet Share

The urgency for improved viewability standards started in the earlier half of this decade. Viewability benchmark reports released by comScore in 2013 clearly established that the problem of non-viewable ads is greater than what the industry originally thought it to be. It showed that only 46% of served ads were viewable.

As a result, viewability scores have improved considerably over the past few years. According to the Media Quality Report released by IAS for H2 2020, video ad viewability for mobile web stands at an impressive 73.7% worldwide. Mobile web display ad viewability, on the other hand, showed a decline in this report.

Therefore, it can be understood that despite the vast improvements in viewability standards, challenges still exist. This article aims to elaborate on those challenges, why mobile web ad viewability is important, and how to improve it.

Ad viewability is a metric that informs you of the percentage of ads that have actually been seen by users. IAB and MRC consider an ad to be viewable if:

Moreover, these ads need to be viewed by legitimate and real users. 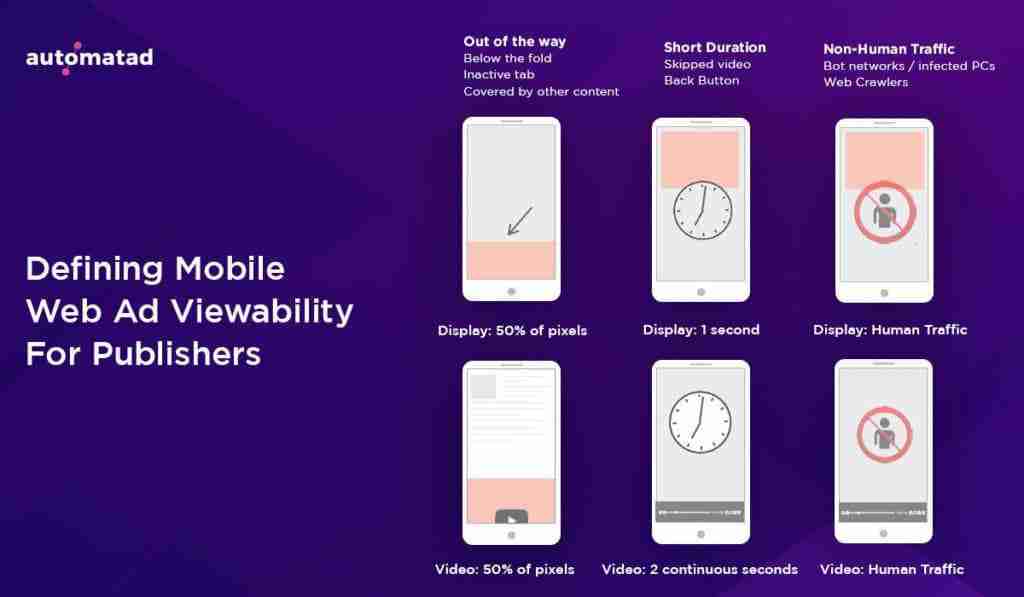 With increasing mobile usage, advertisers have restructured campaigns to target mobile users. In addition to that, due to Google’s mobile-first indexing approach, prioritizing a mobile-friendly website has become a necessity for publishers.

Being a publisher, you need to optimize your inventories to accrue revenue and invest in mobile advertising. This is especially important if your website shows a large volume of mobile users. Maximizing mobile web ad viewability will also potentially improve your overall CTR, as they are most likely to take action after seeing an ad.

Why is viewability important for advertisers?

Said that mobile ad viewability is important for both publishers and advertisers. Advertisers can increase their ROAS by targeting viewable inventory and you can demand higher bids for the same.

Furthermore, Google has prioritized ad viewability tremendously, allowing advertisers to only pay for viewable impressions on its Display Network. They are also prioritizing page load time tremendously when it comes to viewability standards. This can be easily understood through their Render on Idle feature launched on their popular and fairly promising AMP project.

Hence to prevent loss of revenue, you must reposition your inventory to become viewable. You must also strive for making these inventories premium through high-viewability scores, and demand higher bids from advertisers.

How does user behavior affect viewability definitions for desktop and mobile?

User behavior on desktops and mobiles are inherently different, meaning that advertisers and publishers are missing out on opportunities to leverage these differing behavior patterns. Fast scrolling and miniaturized websites are what define the mobile ecosystem, and as a result, viewability standards for mobile should also be different.

“These channels (mobile and desktop) are inherently different and user behavior reflects this. Accordingly, viewability standards should be different across these channels.”

How to increase mobile ad viewability?

There are a number of different factors that have an effect on ad viewability and your overall ad revenue. Factors like banner blindness, slow loading of ads or the webpage, serving ads below the fold, etc. can all affect your mobile web ad viewability. Your aim, therefore, should be to implement viewability best practices, which include:

Ad placement is equally important, as studies indicate ads placed above the fold to experience the highest viewability. There’s a misconception that the top of the page enjoys the highest viewability, but on mobile users start scrolling much sooner than on desktops. Ads placed at the top of the page might get skipped before they even have a chance to load, thereby negatively impacting your viewability scores. On mobiles, other positions like the middle of the webpage experience high viewability. Serve ads in content-rich areas of the website is a good idea.

Check your Google Analytics Screen Resolution report to better understand the location of your page’s fold. You can access this report by logging into analytics and clicking on Audience > Technology > Browser & OS > Screen Resolution (selected as Primary Dimension). But make sure that you do not overcrowd a section with too many ads. Placing ads in positions of high user engagement is also an effective way to increase viewability.

How does page latency affect viewability?

Native ads are another format that you might use, which can help improve mobile web ad viewability. Native ads are cohesive with your website’s design and do not disrupt the user experience, intermingling with the site’s content naturally. You can learn more about mobile native ads here.

Ad viewability has bolstered its position as an important metric in digital advertising. The pressure to prioritize viewability is becoming more important as more and more brands set their sights on increased viewability. Viewability has become paramount for advertisers deciding to invest in inventories, or place an ad on a particular platform or channel. Brands have understood that even the most targeted ad will not generate a profitable ROI if the intended audience does not see it.

A prominent gap still remains when viewability is to be defined from a mobile-first perspective, As mentioned above, a lot of it would prove to be trial and error. You must ensure that despite any effort you take towards improved ad viewability, the user experience on your website mustn’t suffer.

We hope the article gives you a better insight into the intricacies of mobile web ad viewability and enables you to improve your viewability. For any further questions, feel free to leave a comment and we will get back to you.

What is Banner Blindness and How Can Publishers Reduce it?