Automatad Team
At present, there are several advertising models and formulas. This article aims at providing the most important ad revenue formulas which can be used as your little hand guide for revenue calculations.
Share Tweet Share

Publishers are always in pursuit to find ways to generate more revenue. While there are many, a major source of revenue for website owners or bloggers will be from the ads.

At present, there are several advertising models and formulas. We aim to provide the most important ad revenue formulas which could be used as your little hand guide for revenue calculations.

How to Calculate CPM (Cost Per Mille/Cost Per Thousand)?

CPM is the most common online advertising pricing model, and as the name suggests (Mille is a Latin word for thousand), the CPM model compensates the publishers for every 1000 views (impressions) an advertisement receives. We’ve seen the CPMs go as much as $50 for some publishers.

Unlike CPC, where you’ll be paid for the clicks you generated, advertisers will pay you for each impression you deliver. CPM is calculated by dividing the total cost to the advertiser by the number of impressions received on the ad and multiplying the result by 1000.

Thus the CPM that the advertiser agrees to is $1.

You can read about the best CPM Ad Networks if it is your preferred method.

CPC is another advertising model that is used extensively. According to this model, the advertiser compensates the publishers whenever an ad is clicked. This means that no matter how many times the ads are viewed, the advertiser will only pay the publishers for the number of times it is clicked.  Apart from CPM, Google AdSense also supports CPC (but there are many alternatives too) and pays you based on clicks.

CPC is calculated by dividing the cost to the advertiser by the number of clicks received on the ad.

CPC= Cost to the Advertiser / Number of Clicks

The cost to the advertiser = CPC x Number of clicks received How to Calculate CR (Conversion Rate)?

Conversion Rate is an important term that you may need to consider during an ad campaign. It means the ratio of the number of positive conversions to the total number of clicks received on the ad. The positive conversion may be a situation that profits the company for which the ad was created like a product’s sale or subscription.

Why does a publisher need to know the CR of a campaign?

It’s simple. If a specific website of yours has higher Conversion Rates, then you can switch to CPA/CPL pricing model (discussed later in this blog) on that website. This, in turn, boosts your ad revenue. Of course, there are other ways to double your ad revenue.

How to Calculate CPA (Cost Per Action/Acquisition)?

This is another ad model that compensates the publisher for any positive customer action like the sale of the product or sign in of newsletter etc.

CPA can be found out by dividing the cost to the advertiser by the number of actions received on the ad.

CPA = Cost to the Advertiser / Number of Conversions.

It can also be computed by dividing the cost to the advertiser by the product of the Number of impressions, Click-through-rate, and Conversion rate.

Example: Suppose, a certain ad campaign was viewed 5000 times, received 200 clicks and there was a total of 20 positive conversions. The total cost that the advertiser decides to pay is $200, Then the CPA can be calculated as:

No. of positive conversions = 20

Also read: CPM vs CPC vs CPA vs CPI vs CPL

How to Calculate eCPM (Effective Cost per Mille)?

eCPM tells you the performance of your ads. It is found by dividing the total earning from an ad by the total number of impressions and multiplying the result by 1000.

Example: Let’s say that a publisher earns $100 by an ad campaign and the total number of Impressions that the ad campaign received is 10000. Then,

The publisher gets an effective earning of $10 for every 1000 ad impressions.

Why should you calculate eCPM?

eCPM is a great metric to help publishers in calculating and optimizing their ad campaign as it allows publishers to directly compare ad revenues across various platforms.

For example, if you see that a video ad on your website received 500 impressions and earned you $5 while a banner ad received 800 impressions and earned $3. You cannot evaluate the performance of both the ads directly but if you find the eCPM quickly, you will get to know that the video ad had an eCPM of $10 while the banner ad has an eCPM of $3.75. Now, you can directly conclude that the video ad is making you more money. Need to know what performs well for your website, spare a minute to fill the contact form. 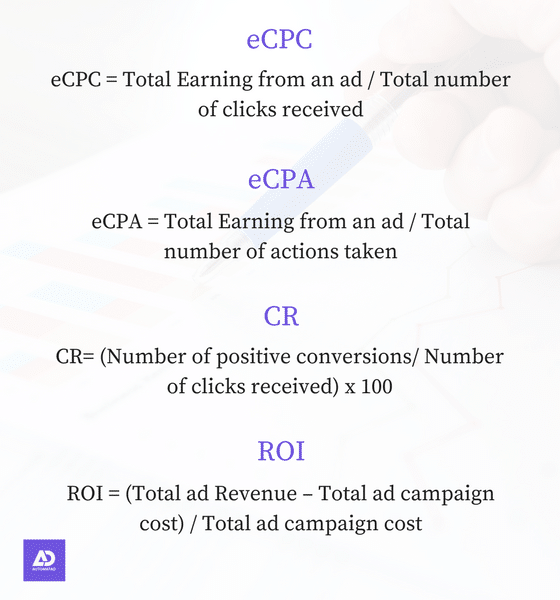 eCPC is a similar concept to that of eCPM with a difference i.e. it takes into account the number of clicks received by the ad rather than 1000 ad impressions. Hence, eCPC calculates the earning made from an ad for every click that it gets.

How to Calculate eCPA (Effective Cost Per Action)?

Similar to eCPM and eCPC, eCPA calculates the effectiveness of the CPA ad model. It is determined by dividing the total earnings generated by an ad campaign by the total number of actions taken on that ad.

How to Calculate ROI (Return on Investment)

ROI is a crucial term in the field of digital marketing. To know about the success of an ad campaign, it is necessary to analyze the overall profit gained out of it. ROI is calculated by subtracting the total campaign cost from the total ad revenue earned and dividing it by the total campaign cost. Sometimes, marketers refer to it as ROAS (Return On Ad Spend).

So, you got what are you here for? Great. Now, we have a weekly email to help you stay updated with the trends by delivering essential insights. Feel free to subscribe to our newsletter here.

How To Optimize Page Loading Speed For Higher Revenue?

Finding the Right Balance Between Ads and User Experience

Next Post
What is DaisyBit?
8 Comments
Leave a Reply Cancel Reply