Automatad Team
If you aren't familiar with video header bidding, then you've come to the right place. Here's the most comprehensive guide on video bidding to help you get started.

Header bidding is now considered as the de facto way for publishers to sell the ad impressions programmatically. Before the technique was introduced, publishers had to rely on the waterfall method where demand partners are called in sequential order.

Unlike waterfalling, header bidding enables the demand partners to compete simultaneously in a unified real-time auction. This drives up ad revenue due to the increased competition. In fact, it’s a win-win for both publishers and advertisers. For publishers, increased bids and higher revenue and for advertisers, better/equal opportunities to bid on the quality inventories.

What is Video Header Bidding?

As per the customer, let’s start with the basics. Feel free to skip this section if you are familiar with the process.

Now, video header bidding is a technique used by publishers to open up the video ad impressions to multiple demand partners simultaneously before sending the requests to the ad server. In simple words, it creates a fair auction and enables the publishers to make Guaranteed (Preferred deals, Private Auction, etc.) compete against Non-guaranteed auctions.

How Does Video Header Bidding Work?

Video SSPs/Ad Exchanges: Just like any other SSP, video SSPs help the publisher to sell their ad inventories and generate ad revenue. However, unlike a generic SSP, video SSP is more focused on bringing more video demand and helping the publishers to monetize their video content across desktop and mobile web, mobile apps, etc. Learn more about why you need video SSPs and a list of best SSPs here.

Video Ad Server: A Video Ad Server is responsible to create video ad inventories, generate video ad tags such as VAST and VPAID, and monitor the video ad impressions. Note that you don’t need a video ad server to run video header bidding. Google Ad Manager can do the job as well.

Video Player: A video player is responsible to communicate with the wrapper to receive the video ad creative and serve it to the users. You can get a third-party video player or even build an in-house video player by using the open-source platform Video.JS. If you don’t have enough engineering support, then here’s a list of the best video players that you can try.

Header Bidding Wrapper: A wrapper is responsible for running the video header bidding, selecting the auction winner, and passing the bid responses to the video ad server.

Let’s understand how they work together to make video header bidding possible.

Though the above-mentioned steps sound quite easy to understand and get started with video header bidding, the process is much more complicated than it seems. But why? Because video ads require additional attributes such as VAST to extract the creatives. Technically, this is how client-side in-stream video header bidding takes place if it’s done via Prebid:

Sounds a bit complex? Yes, it is. And, that’s why publishers find video header bidding more challenging as compared to the display header bidding.

Video ads, generally, have higher CPMs and CTRs than display ads. And integrating header bidding for video ads definitely increases the revenue. As per a recent study done by PubMatic, 61.3% of publishers believe that video header bidding improved their ad revenue.

The more demand partners, the higher the ad fill rate. Since video header bidding calls multiple SSPs/Ad Exchanges at a one time and the video supply is scarce, ~57.7% of publishers agreed on an improved ad fill rate for their video inventories.

Video header bidding enables the publishers to keep an eye on the demand partners (SSPs/Ad Exchanges/Networks) and analyze their performance via header bidding analytics tools along with Google Ad Manager reports.

Besides, as the demand partners are directly connected to the header bidding wrapper technology, publishers can see how much they are getting for an inventory and the share of middlemen involved.

Even if you want to run server-side bidding, you can leverage open-source solutions like Prebid Server.

Any Disadvantages of Video Header Bidding?

Latency in the Client-side:

While the video header bidding reduces the pitfalls of a waterfall (i.e. passbacks), adding the JavaScript code of the wrapper and video player increases the page load time and has a negative impact on the user experience. However, latency can be mitigated by using the right mix of demand partners, implementing page speed optimization strategies, or moving to the server-sider set-up.

Demand partners can just listen to the request and access users’ cookie data without bidding for the impressions. However, this can be easily sorted out by only allowing the best and well-known demand partners to stay connected to the wrapper. Keep an eye on the bid rate and win rate, you’ll know the ones that need to be cut-off from the supply.

The S2S video header bidding relies on routing the real-time auction through the publisher’s ad server. And this brings a non-transparent layer into the auction dynamics. Again, you can use an open-source solution and ensure you’re not sitting in the dark. Many header bidding providers in the marketing (including us) leverage open-source frameworks to guarantee 100% transparency.

Challenges Faced by the Publishers

In the study conducted by PubMatic and Forrester, almost two-thirds of publishers have accepted that they are struggling with the lack of technology. With respect to technology, the publishers find it challenging to: 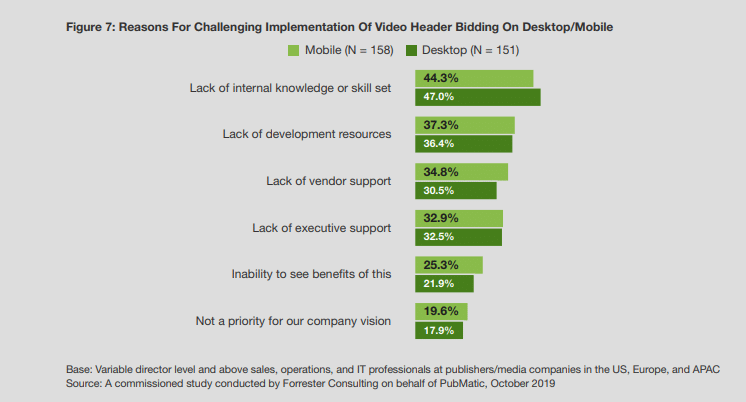 Despite the technical challenges, the future of video header bidding looks promising to the advertising industry.

Although header bidding has been here for a long time, publishers still believe in many myths that need debunking. Some of the common myths are:

As you know, header bidding gets its name from the fact that the bidding happens on the header. That is, <head> <head/>.

Video players don’t have header tags. But as the video player itself is just another piece of JavaScript, you can run header bidding on the header and pass the bid values to the player. The prebid wrapper can be used here, but it only works when the video player loads at the same time as the page.

Video header bidding increases the latency is a widely held but false belief. Latency is also caused in the waterfall method because the publishers have to pass the ad impressions along the chain of several demand partners.

Though the page loading speed may increase with video header bidding, it can be reduced by implementing various strategies.

How to Implement Header Bidding for Video?

This comes as a little surprise because implementing video header bidding is complex and it varies based on the wrapper used. On a higher-level, this is how to set it up.

The first step is to create the video ad units and ensure that you specify all the video ad and video player-related parameters such as video player size, minimum & maximum video ad length, skippable or not, if it is VPAID inventory or not, etc.

After completion, you need to set-up the line items and video ad creatives in your video ad server according to the appropriate sizes. Here’s a detailed guide that will help you to complete this step.

The next step is to add the video ad units to the header of your webpage. While adding the ad units, make sure that you have set the timeout for your demand partners to limit the latency. In addition, you can also set up your header code to record whether you received video demand for each impression or not.

Once this step is done, you’ll be able to send the requests to the configured demand partners.

Once you’re done with the setting-up ad units in the ad server and page’s header, it’s time to integrate the wrapper and video player. This enables the wrapper to pass the winning video bid response to the video player. It is one of the trickiest steps of the implementation of the whole video header bidding process because you’re basically connecting two customizable tools (Javascript code) –  your bidding wrapper and the video player.

Unlike display ads where the web page and ads load simultaneously, in video header bidding, the web page can load before the video player loads. Therefore, the video ad units aren’t called until the user hits the “Play” button.

This increases latency as the users have to wait for the web page to source the video ad before watching the video content. So, minimize this latency by setting up the page to start the auction as soon as the page loads rather than waiting for the users to click on the ads.

There are chances that you may create a video playlist with multiple video clips. In such a case, make sure that you get relevant ads for each clip. Because if you make requests from the page level, metadata and content of the page is used to pick the ad. Som ensure to send the metadata associated with each video clip.

Integrating multiple demand partners is good as it increases the bidding competition and drives higher video eCPMs. The next thing you should do is to collaborate with your demand partners in order to maximize the quarterly revenue.

Since the eCPM and bidding density varies with factors such as seasonality, it is best to know the trends and understand what buyers are looking for and try hands-on approaches to maximize the bid rate, win rate, and ad revenue.

While the setup seems technical and complex, it can be simplified with the help of the right video monetization partner.