VPAID – Everything You Need to Know

Automatad Team
VPAID protocol is developed to help us deliver interactive video ads to the users and better measurements and tracking for the advertisers. But do you know it works and why IAB is exploring an alternative to VPAID? Let's get the answers.

VAST, VPAID, and VMAP are the protocols that ensure ad servers and video players are communicating effectively to deliver a video ad.

However, with the advancement of technology and the introduction of executable video ads, the complexity between the ad server and the video player has increased. That resulted in a lot of incompatibilities surrounding the different types of ad formats, and issues such as low render and ad fill rate, and longer ad load time.

Since executable video ad units require software logic to be displayed as a part of ad playback, to make it less complicated, IAB provided certain specifications and named it VPAID for in-stream video ad formats so that publishers can run interactive video ads as they need easily.

In short, the VPAID protocol was introduced to enable the compatibility of video players with the standard video ad unit specifications and provide a rich interactive user experience to the visitors. If you’re new to the world of video advertising, this protocol is something that will be relevant for you in the industry. So, let’s take a closer look at what is VPAID and how does it work in detail.

VPAID (Video Player Ad-Interface) is an in-stream video ad player is a script that is embedded inside the player to instruct it on what ad to play, how long the video ad should be played, where the ad should be placed, and where to take any action (play/pause) in the video.

But isn’t the same thing done by VAST Tag?

True. But, VAST doesn’t support executable ads and it is not capable of providing interactive UX/UI. Also, VAST doesn’t allow publishers to collect rich interaction details about a video ad. In contrast to VAST, VPAID video ads can offer a rich ad experience and can also collect interaction details and ad playback. VAST is just a universal specification for serving video ads while VPAID allows viewers to interact with video ads such as stop/pause, expand, share, etc.

For a comprehensive differentiation between the two, you can read our VAST vs VPAID article

What are the Benefits of VPAID Ad Creatives?

How does it work?

As we said above, VPAID fills the communication gap between the video player and an executable ad unit, it provides a set of instructions to the player and enabling the publisher to record the interaction of a user with the video ad content. Usually, this is how VPAID enables video player and server to interact with each other: 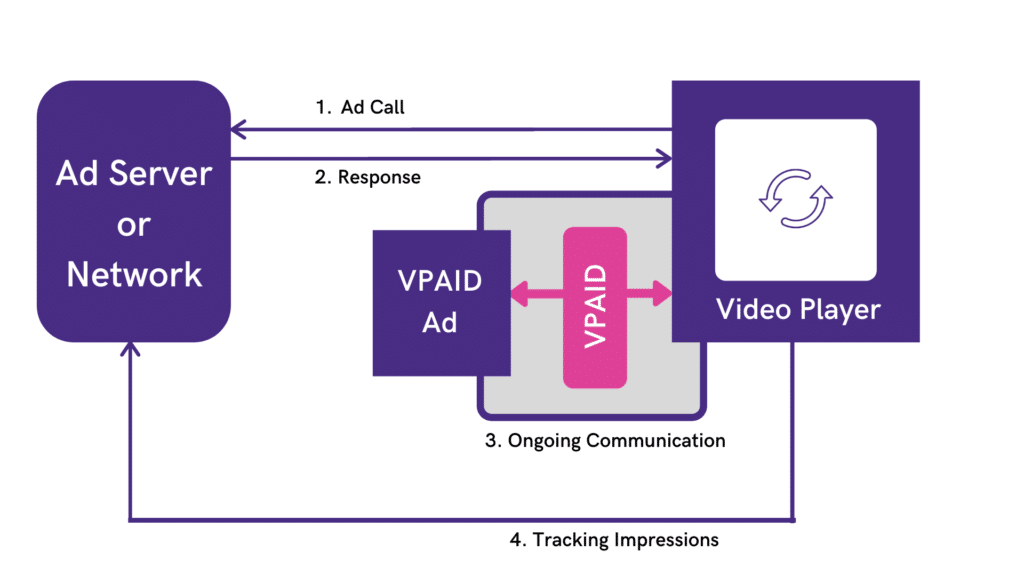 Once the server receives the ad call, it responds to the server with a VAST XML containing a VPAID-compliant executable video ad unit.

Using the VPAID, the video player gets and sets the properties of the video ads and executes the video ad as defined by the publisher.

If the ad server tracking is not specified by VPAID, the video player and ad units are responsible to track and send impressions to their respective ad servers.

How does VPAID work in Different Video Ad Types?

Technically, this is how VPAID works in Clickable and Overlay Banner video ads:

Case 1: If TRUE, the video player gets to know that the video ad is Clickable Pre-Roll Ad.

What is the Current Version of VPAID Tag?

3.0 is the current version of VPAID Tag.

Related Read: Everything You Need To Know About Video Ad Standards

How to Create a VAST tag with VPAID Ad Creative in Google Ad Manager?

To create a VAST ad with a VPAID creative in Ad Manager, follow the below steps:

Enter the Duration of the video ad, and then click Save.

From the above steps, we can conclude that the VPAID ad is just an ad that is transported through a VAST container. Also, if you have a player that works with VAST ads, then it can automatically handle VAST ads with VPAID creatives. And this proves the tags are correlated to each other for video advertising.

Sidenote: To handle the VPAID script, some players will use VPAID API as the implementation can get quite complicated.

Snippet of a VAST ad having a VPAID Creative:

Currently, VPAID 3.0 is in its draft form and is expected soon to be released in its final form. Besides, VPAID is exclusively designed for video players that are capable of loading and delivering executable in-stream video ads. So, we suggest you ensure that the player you’re working with supports the latest version of VPAID 2.0 or if you’re building your video player then build the player to the standard VPAID specifications.

As VPAID has complicated execution and higher chances of errors, IAB is exploring alternatives like SIMID.