VAST Tag – The Primer For Publishers

Video Ads are driving the digital ad spend on the Open Internet. And, the VAST tag is propelling the adoption of Video Ads. So, doesn’t it makes sense to say VAST tags are responsible for the growth of video ads?

In fact, eMarketer’s latest forecast predicted that video ads will grow 30% this year and will take up 25% of the US digital ad spend.

And, the growth is as impressive in other markets as in the US. As per a source, video ad spend will grow at a CAGR of 16.5% in Asia.

We can go on and on. Ultimately, publishers will end up implementing programmatic videos. After all, that’s where the users and the advertisers are trying to converge.

What does this mean?

You need to ramp up your video advertising strategy and revisit the jargons you’ve skipped in the past. In this piece, we’ll stick to VAST. Without a doubt, you should have come across terms like VAST, VAST tag, VPAID, etc. when there’s a talk about video ads.

What is VAST, anyway?

At its simplest form, VAST is a script designed to allow video players and ad servers to communicate with each other so that the video ad will be served properly or in an expected manner.

It instructs the video player how to get the ad, where to redirect the user after the CTA when to render the ad, how long should the ad be run, etc. Besides, information about tracking pixels and other ad tech vendors will also be included in the tag.

If you peel the VAST tag, you could find an XML Schema* that describes how the video player should handle the ad from the server and other tracking details.

*XML which stands for eXtensible Markup Langauge is developed to store and transport data. The notable aspect of the language is that it’s both human- and machine-readable. Hence, we use it to let ad tech communicate.

The VAST working process can be summarized in just three events. 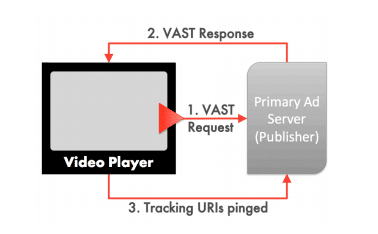 VAST Request – This is the request sent by the video player to the ad server in order to retrieve the ad.

VAST Inline Response – The ad server receives the request and responds back with an inline response containing the media files and necessary tracking URLs.

Tracking URLs Pinged – Once the desired/specified events have occurred, the video player will fire the tracking pixels/URLs to let other parties record and measure impressions.

The working varies slightly if a second ad server is involved in the flow.

IAB created VAST and has been updating it since its inception to meet the growing needs of the ecosystem. VAST 1.0 was released in 2008 and now we’re at VAST 4.1 (June 2018 release). However, the adoption rate is slow and the debate still goes on to improve it.

VAST video tags are backward compatible, thus, preventing any interruption in the supply chain. All the major video players support some sort of VAST and VPAID to ensure video ads are served as expected.

How VAST 4.1 is better than the other versions?

VAST 4.1 will address key issues and provide significant improvements on Video Ad Serving Template, which is currently used by the adtech. Noticeably,

We’ve shared VAST Tag 1.0 and 4.0 here to help you discern the difference and what has been included along the way.

How to Create a VAST Tag?

If you use Google Ad Manager (Google DFP), generating a VAST Tag is pretty straightforward.

Can I Create a Vast Tag Manually?

You can construct the tag manually by using the predefined parameters. For instance, ‘sz’ specifies the size of the master video ad slot. sz=400×300. After defining the values of the necessary parameters, you can stitch them together to make an XML.

AdOps engineers use the parameters to edit/check the VAST ad tag as there is no value-add in creating it manually.

In addition, there are a couple of VAST tag generators (offered by the video players) in the market that can help you generate the template.

Note: You need to make sure your video players are supporting the specifications to prevent errors. If you’re using Google Ad Manager, you can take a look at the supporting players here.

Of course, there’s a handful of options to validate your VAST tags. The best ones are from Google and SpringServe vast tag testers.

In case you don’t know, IAB offers its own VAST validator. It is in beta and you need to be a registered member to access it.

VAST Tag validators work by actually implementing the code. They make the calls to the respective URLs to render the ad creative and track the basic ad events including clicks, ad completion percentage, and ad errors.

Debugging a tag would be fairly simple as you just have to look at the parameters and the respective values in the tag. However, it doesn’t mean there are no chances for any schema-specific/server-side errors.

Some of the VAST errors include:

Cause: This can be caused when the buyer’s response is either malformed or an otherwise invalid XML document or a redirect VAST URL that fails to resolve successfully.

Cause: This can be caused when the buyer’s response is missing the required elements or attributes of the XML or contained unrecognized elements, according to the IAB Video ad standards.

Cause: This can be caused when a VAST redirect tag does not return a response within the timeout (5 seconds is the default) specified in a wrapper element. It could include request errors, such as an invalid URI, unreachable or request timeout for a URI, security, or other exceptions related to requesting a VAST URI. It could also be due to a high latency connection (for example, 3G) or simply a slow response from a buyer.

Recommended action: Increase the timeout limit of your player via the SDK.

Can I Place a VAST Tag Directly on Site?

What are the Benefits of VAST Tags?

As obvious as it seems, both publishers and advertisers can save time, technical implementation, and overhauling costs by simply adhering to the VAST standard. Because that’s a universal format everyone uses in the industry.

Whether it is FreeWheel or Google Ad Manager, your player will render and run ads without any errors. And, especially with recent updates (VAST 4.0 and 4.1), verification and viewability vendors can easily get into the VAST tag to do their jobs.

As a whole, VAST is one of the reasons behind the traction of digital video ads on the open internet. Though it’s not perfect, the consortiums and feedback will take us to the best possible solution.

How long have you been using VAST and what is the one thing that needs to be improved in the VAST tag?

Next Read: How to Maximize Your Programmatic Video Ad Revenue?