Automatad Team
If you're wondering how VAST is different from VPAID and how to use them together to deliver interactive ads, then you're in the right place. Let's get started.
Share Tweet Share

Video ads have seen tremendous growth over the past years and they are poised to continue the trend. The latest report by IAB declared 36% YOY growth in video ad spend, which is more than double when compared to the 17% YOY growth in the overall digital ad spend. More and more advertisers and publishers are willing to adopt video in their ad strategy but the confusion over ‘how the video ads should be delivered’ still haunts the market. In this post, we will try to differentiate the two major video protocols of the industry – VAST and VPAID so that it becomes easier for you to strategize your monetization plans.

VAST and VPAID, both are video ad serving protocols, which means they are both different sets of rules on how a video ad should be delivered to the user. IAB (Interactive Advertising Bureau) framed the protocols to ensure the industry players have a standard way to interpret, deliver, and measure video ad campaigns.

Moreover, VAST and VPAID are not mutually exclusive. For the delivery of video ads, you will be using VAST in every case. The addition of VPAID is just the addition of new features on the already existing VAST framework. Let’s dive into the differences. Shall we?

VAST stands for Video Ad Serving Template. It helps with the communication between the ad servers and the video players on the website. It does so by enabling both of them to speak and understand the same language. Before the arrival of VAST, the ads had to be custom programmed according to the video players of the publishers. Custom programming for each player or changing the ad stack to use a different server hampered the ability to scale up video ad serving.

When every player and server communicate in the same manner then advertisers can deliver ads to multiple video players simultaneously. At the same time, publishers can receive video ads from multiple advertisers. In other words, the ad delivery process can be scaled up. Want to know more? here’s our detailed VAST guide.

VPAID stands for Video Player Ad Serving Interface. It also helps with communication between ad servers and video players. It was introduced to bring advancement to the features provided by VAST, such as:

For a detailed discussion on VPAID, you can read our article- What Publishers Ought to Know About VPAID?

Here is a demo of a VPAID ad for better understanding:

Difference Between VAST vs VPAID

The mechanism of serving ads is different between the two:

The publishers using VPAID have a higher potential of earning as the VPAID tag allows them to serve a broad range of video ads.

Even though VPAID looks better than VAST with the advertisers’ as well as the publishers’ perspective, but it has some disadvantages as well.

IAB is now on the fourth version of VAST which is aimed at replacing VPAID. Efforts are being made to make VAST capable of measuring viewability and ad verification. But as history shows, the industry has been slow in adopting VAST. Even when version 4 has been released, it is normal to see publishers using video players which are following versions 2 or 3. 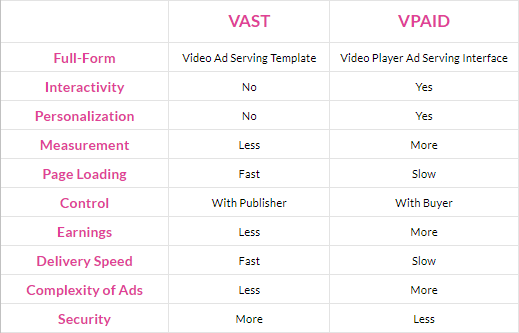 If interactivity and measurability is the main priority then VPAID is the only option for publishers and advertisers. But this scene will not remain the same for long. Due to the drawbacks of the existing protocols, IAB is trying to come up with better alternatives. VAST Version 4 is one example and SIMID or Secure Interactive Media Interface Definition being the other. Soon there will be a true replacement for VPAID which will be safer and more reliable. Still, have some questions? let us know in the comments. Looking to run video ads on your site? reach out to us.