Automatad Team
“The Super Bowl is understandably associated with television ads, but it’s such a big event that it moves the digital media market as well.”
Share Tweet Share

Super Bowl ads are perhaps the most highly anticipated in all of television advertising. In 1984, Apple aired what is widely considered one of the best ads in history during the Super Bowl that launched its Macintosh computer. Super Bowl ads can be more expensive because they’re being watched by more people than almost any other ads.

As a result, the ads get more exposure, and that exposure is practically unprecedented. The commercials are hyped and advertised as much (if not more) than the game itself — and for good reason. Advertisers spend an insane amount of money for a 30-second spot during the game, because they know that millions of people will be watching. In 2019, a 30-second spot cost the advertisers $5.3 million, and on average, the cost of reaching 1 million views was over $53,000, up by 10% Y-o-Y. 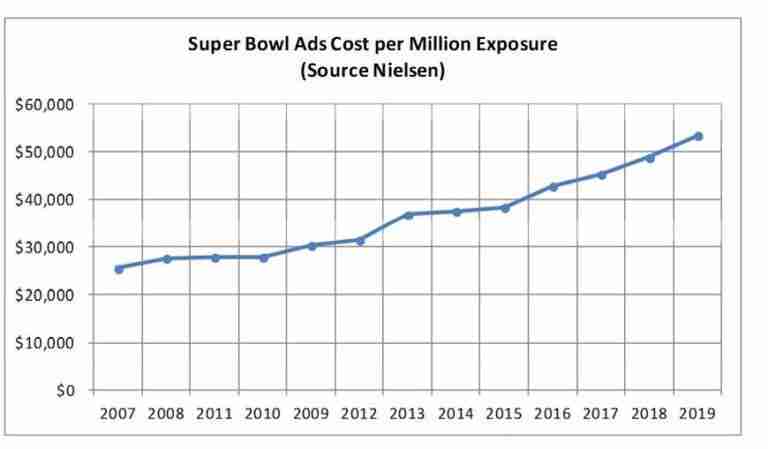 “The Super Bowl is understandably associated with television ads, but it’s such a big event that it moves the digital media market as well. Marketers who understand these dynamics can be smarter with their digital investments during this year’s game,”

As you know, Super Bowl just winded up and many sports publishers did their best to provide Super Bowl-related coverage on their websites, mobile apps, or other streaming devices to take advantage of this major sporting event. But what strategies are truly effective? We’ll look at different Super Bowl Strategies for Publishers that are tried by some top publishers during Super Bowl in this article.

Content bundling has been part of the publishing industry for a long time. Whether it’s a food publisher or lifestyle publisher, bundling is a pretty standard concept, and several media outlets have been doing it for decades with different offerings. NBC’s partnership with BuzzFeed and Complex Networks during the Super Bowl 2018 is a perfect example of content partnerships.

At first glance, the pairing seemed unusual because of their different areas of expertise. But macro strategies like this are probably the biggest things that helped the publisher reach people who aren’t football fans. Besides, even though their niches are vastly different, they came together to see the benefits of what the other offers and provide different options to the audience to engage with the content.

The publisher aired original episodes of BuzzFeed’s “Worth It” and Complex Networks’ “Hot Ones” on TV. And the only thing that could make the Super Bowl even more interesting was to organize interviews with celebrities Von Miller and Denver Broncos.

Sports, chili peppers, and star power. The episodes had it all.

“Across both the Super Bowl and the Olympics, we’ve done a great job of aggregating audiences on social, on our website, and on TV. But because these events are so huge, it’s been part of our strategy to go outside of our own footprint and work with partners [such as BuzzFeed and Complex Networks], who can help us reach people who aren’t necessarily football fans.”

So, how can you start with content partnerships? First, find a partner who has common goals or shared values, understand their KPIs (website engagement, social engagement, and so on). The next step is to communicate early, pitch, and convince to choose you as a content partner. Also, keep in mind that:

Launched in August 2019, Bleacher Report’s new vertical B/R Gridiron has been buzzing lately among football lovers. Why? Well, Gridiron has all the NFL news and highlights diehards want to consume ­and it has them packaged with the most salient visual elements possible. It’s a new approach for Bleacher Report. 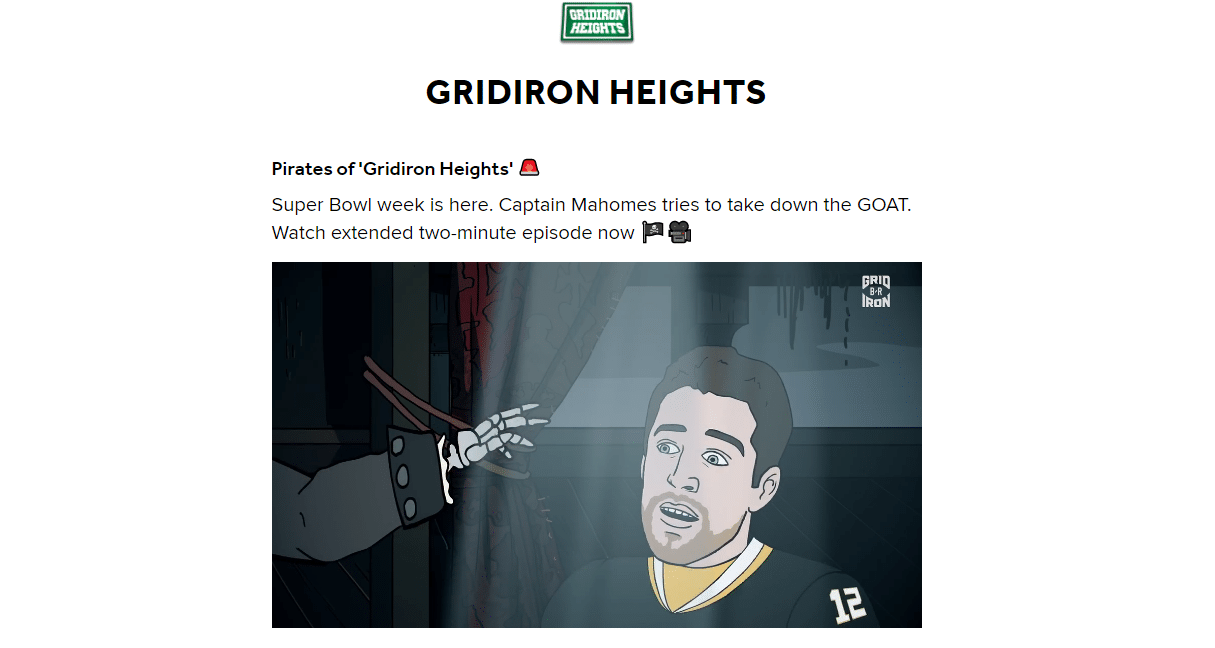 Last year, the publisher organized a multiple-studio event called B/R Gridiron @ 1111 Lincoln (named after the venue on Lincoln Road) in Miami Beach, where football fans could attend live recordings of Bleacher Report’s shows. To engage the attendees, the publisher hosted shows like “The Lefkoe Show,” and podcasts “Stick to Football”.

Over the past year, Bleacher Report’s events business has grown into one of its largest sources of revenue. As said by the publisher, one-quarter of the overall revenue of Bleacher Report came from sponsorships, company events, and eCommerce businesses. And this year, the publisher has partnered with DraftKings, a sport betting company, and is hosting another event called The B/R Drop Zone: DraftKings Big Game Prop Reveal.

Sponsoring sports events like the NFL draft might be an unusual marketing strategy for many digital brands. But Bleacher Report has seen benefits by partnering with some top brands. So, how can you replicate the success like the Bleacher Report?

For a growing publisher with thousands or a few millions monthly visitors, hosting events like B/R might not be practically possible. You need big brands, a huge budget, advanced technologies, and much more. But you can experiment by organizing small virtual events on your website. Here are a few quick tips for you to bring your events online:

ESPN has been the leader of sports cable programming for decades, with its channel reaching millions of US homes. The publisher is no longer limited to broadcasting sporting events on TV as its subscribers now have access to live streaming sports on the website, mobile apps, and streaming devices.

As more and more people are cutting the cords and devouring in online content, ESPN has come up with ways to improve its online presence. Last year, the publisher created a fresh studio and rolled out 500 live shows across various social media platforms (YouTube, Facebook, etc.) during Super Bowl.

“These shows are different than the shows we do on TV. If you think about what we did leading into college football, the social shows are often very relaxed. I put [an all-] capital ‘fun’ in front of the tone we want to see. They’re about driving interest and enjoyment around it.”

A significant part of ESPN’s strategy has been expanding the quantity and scope of live digital programming and aiming to hold on to Super Bowl audiences and hoping that future growth will come from it. For instance, 70% to 80% of viewers of ESPN’s SportsCenter on Snapchat never visit the linear channel, and this gives the publisher an opportunity to keep advertisers glued not only to its TV channels but also to other social channels.

“People are looking for growth areas, but I think they want to look to social [media] first versus adding more in TV.”

Almost every publisher has audiences over social platforms, and we believe you too have. And for a sports publisher, Super Bowl season can be one of the best times to offer something new to the audience and explore additional revenue streams. We aren’t suggesting to follow every strategy of these publishers as hosting live shows, getting big sponsorship deals, etc. are easier said than done. It depends on the resources, reaches, and several other factors. However, there are a few easier things that you can do.

For example, you can publish content around the Super Bowl (Philadelphia Inquirer sold its Super Bowl eBook at $35 in 2018), and promote the content via social channels or create games on your website like CBS is doing this season. While Philadelphia Inquirer found an additional revenue stream during Super Bowl, for CBS, it’s going to help the publisher boost the engagement while collecting first-party data of readers.

The Super Bowl can become one of the most lucrative events for digital publishers, provided they take the steps to execute strategies and develop partnerships that stand out. Publishers such as ESPN and Bleacher Report have historically invested heavily in advertising during the Super Bowl to reach a wide audience and generate additional revenue. But you don’t essentially have to start with upfront investments.

Based on your strengths and audience, come up with a series of small bets that you can try out next season and eventually double down on the ones that work in your favor. If you need any ideas, we’ve covered a bunch of case studies and growth stories.

You can also learn How the Bleacher Report has thrived by building communities of fans around every sport and Why ESPN has been dubbed the “Worldwide Leader in Sports.

How to Optimize Your Setup based on Seasonality?

What Publishers Need to Know About Halloween Advertising 2020?

5 Black Friday Strategies for Publishers in 2022

What Publishers Need to Know About Halloween Advertising 2022?

Top Strategies to Make the Most Out of Christmas 2021

Next Post
How to Integrate Goo...
0 Comments
Leave a Reply Cancel Reply