Automatad Team
“Programmatic Ad Inventory Shouldn’t be Viewed as the Remnant Inventory”. Here are the steps to help you increase your programmatic revenue.

Sure, programmatic advertising is an irreplaceable stream of revenue for publishers. But, the CPMs aren’t keeping up with the expectation and there’s no significant growth in the CPMs and revenue. Everything seems to remain stagnant. So, what can I do to increase programmatic CPM?

Programmatic advertising can be a bit daunting for publishers. Even though there are easy-to-use platforms and manuals to help you with the setup, you continually need to optimize. Why?

Because the tides are constantly changing in the industry.

For instance, whenever a new privacy law passes, the whole industry has to evolve (And, it’s the good thing). However, the most pressing issue is with the CPMs. Publishers struggle even to maintain their CPMs let alone improve.


So, we’ve decided to create a guide to help you beat the CPMs; now and forever. Here’s part I of our two-part series. Let’s get started.

How to Increase Programmatic CPM?

This one is a no-brainer. Yet, many publishers make this mistake over and over. Most of the publishers haven’t started supporting In-stream video ads and other interactive ad formats. It is essential to keep up with market trends and user behavior over time.

Consider it this way. If the demand is high for video, does it make any sense to create more display banners? Of course, not. So, take a deeper look at the demands and start providing the right formats.

On the contrary, you can pick the format based on your audience’s feedback/experience and then, partner with the right demand providers. However, this method is risky for a mid-market publisher as it involves several rounds of test runs. Besides, work involved in migrating the demand partners, creating the ad units, etc. could be making a dent in your revenue.

Note: You can pick the format which satisfies both the advertisers and the audience. For instance, a study by eMarketer found that every data provider—both buy- and sell-side—reported that CPMs for 300×250 desktop display units rose from Q4 2016 to Q4 2017. If your audience prefers them, you can go ahead with 300*250 units without any hesitation.

Although the concept is old, it hasn’t gained enough traction among the Mid-Market. Publishers can sell their inventories through various programmatic models. Often, they seem to push, only to get the fill rates.

“Programmatic Ad Inventory Shouldn’t be Viewed as the Remnant Inventory”

Michael Dugan, former CTO of Forbes said the company had a minimum ad budget for direct deals. If the deal seems to be lower, then it will be passed on to the programmatic sales team. The programmatic team will work with the advertisers to offer a solution, from Programmatic guaranteed to Self-Service. Similar to this, you can frame your own funnel offerings. The one which sits at the top is the best deal for advertisers and one at the bottom has the lowest priority.

Here’s how the programmatic offerings of the Forbes look like: 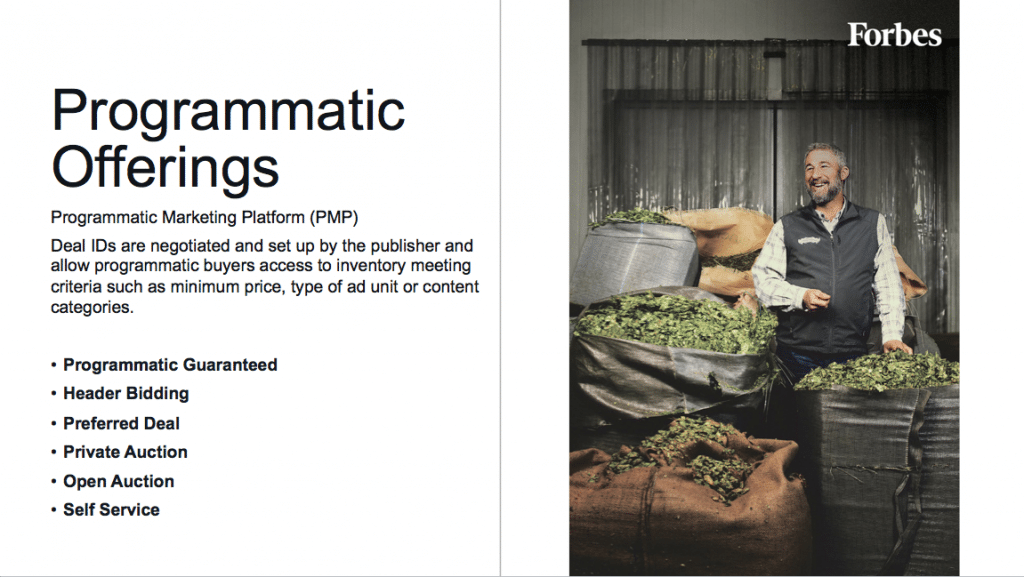 Agreed. It isn’t possible to get advertisers lined-up at the beginning. But, once you prove the worth of your inventory (like Viewability, Target Audience, etc.), advertisers would prefer to give it a run.

Of all, header bidding is at the top of the funnel. You can just reach us today and we’ll help you set that one up.

3. Make Use of Audience data

It is tricky to handle the data. However, CPMs rely heavily on audience data. So, any investments, efforts, and partnerships you made to elevate your audience data are worth it. In a new study, eMarketer reports that programmatic ad prices have risen meaningfully over the past 12 months.

“Rising prices are a testament to the importance of audience and data,” said eMarketer principal analyst Lauren Fisher, who led the study.

However, we’re not advising you to rely on DMPs or other technologies to make sense of your audience. In fact, you can do a basic audience segmentation with the help of Google Analytics.

What can you do with the audience’s data?

It’s one of the most predictable factors influencing CPMs. Advertisers aren’t just considering the traditional factors such as impressions, reach, and other ad serving metrics anymore. Now, they’re also including viewability, ROI, brand mentions, etc. into their campaign metrics.

In addition, when your inventories are viewable, you can refresh your ads. This, in turn, will increase your revenue by up to 40%. We offer a product called ‘AXT’ specifically designed to do that for you. Again, you can reach us to get a free demo.

Here’s an interesting take on ‘Programmatic CPMs’ by eMarketer.

It is worth mentioning that CPMs depends on several factors. We try to convey the important ones so that you can increase programmatic CPM for your impressions as soon as possible.

Want to Test Your Ad Load Speed? Here Are the Ads Audit Tools From Google.

Google Ad Experience Report – How to Access and Use It?