What are Universal IDs and How they Help Publishers?

Automatad Team
So you’ve built an engaged audience and optimized your ad stack to run targeted ads effectively. But, all of a sudden, Google announced that it would be phasing out the support for third-party cookies in the near future. What's the next step?

We all can agree that the programmatic advertising industry is evolving faster than ever before because of the privacy laws and upcoming browser changes. The situation (some call it as ‘dire’) has pushed the publishers, advertisers, and other ad-tech vendors to think about the replacement for 3p cookies and figure out a way to track the audience to run targeted ads. But is Universal ID the solution? Let’s see.

Because of the way publishers and advertisers relied on third-party cookies for better results, the targeted advertising might seem impossible without them. And that’s why, on one hand, ad tech companies like The Trade Desk, LiveRamp, ID5, etc. and on the other, consortiums including IAB, Prebid, and Advertising ID Consortium — have been working to create universal user ids to target the users even after the removal of cookies and bypass the cookie syncing process. Yeah, we are referring to universal IDs (or shared IDs).

Universal ID has proved itself as an alternative to third-party cookies, and a solution to a few other problems. This article covers all the basics and benefits of Universal IDs and some of the Universal ID solution providers in the industry. But, before jumping into it, let’s understand why we need it in the first place.

Sidenote: Not all the universal IDs will work after the cookie apocalypse. Some of the providers claim to enrich the IDs with first-party and offline data and so, they can work without 3p cookies. We’ll get into the details later in the post.

Why Do You Need a Universal ID?

Universal IDs are created to replace the functionalities of 3p cookies and help the industry bypass the cookie syncing process. Syncing cookies from multiple ad tech partners may result in losing visitors’ data. Because each of the ad-tech partners with their cookies (cookie IDs) has to sync with one another to identify the user. Especially, when the user is new to the platforms, then they have to create a unique user ID and then sync it with each other.

Since there isn’t a standardized ID that can work for all participating partners, the cookie-syncing process drastically slows down the loading of a web page and reduces the match rates as well. How does that happen? Look at the image to understand how cookies are lost during the whole process:

And this concept has given rise to Universal IDs.

“You get one name tag and everyone you meet can read your name tag. In the current web experience, it’s like everyone can only read the name tag that they put on you. This means that you, as the delegate (or consumer), end up having hundreds of different name tags all over you. That is annoying for users.”

By now you might have an idea how and why Universal IDs are needed.

What is a Universal ID?

The Universal ID is a user identifier (user ID) created by the prominent ad-tech consortium/company to provide a shared identity to identify the user across the supply chain without syncing cookies.  Most importantly, it isn’t restricted to third-party cookies. In other words, first-party data (CRM) and offline data can be used t0 create universal IDs.

Unlike cookies that are based on probabilistic matching, Universal IDs are created on the basis of deterministic matching (not all of them though). So, it is going to be far better than the cookies. Keeping aside the cookie-independent benefit, Universal IDs can benefit everyone involved in the transaction. How?

Publishers and advertisers can display the right ads, while consumers will not find irrelevant ads on a web page. SSPs don’t have to pay to another network for data-syncing and storage, whereas DSPs can participate in the auction more often and hit the goals of an advertiser’s ad campaign. And, for a data provider, you get better match rates between the SSPs and DSPs. Sounds like one solution to all problems? Yes, it is. 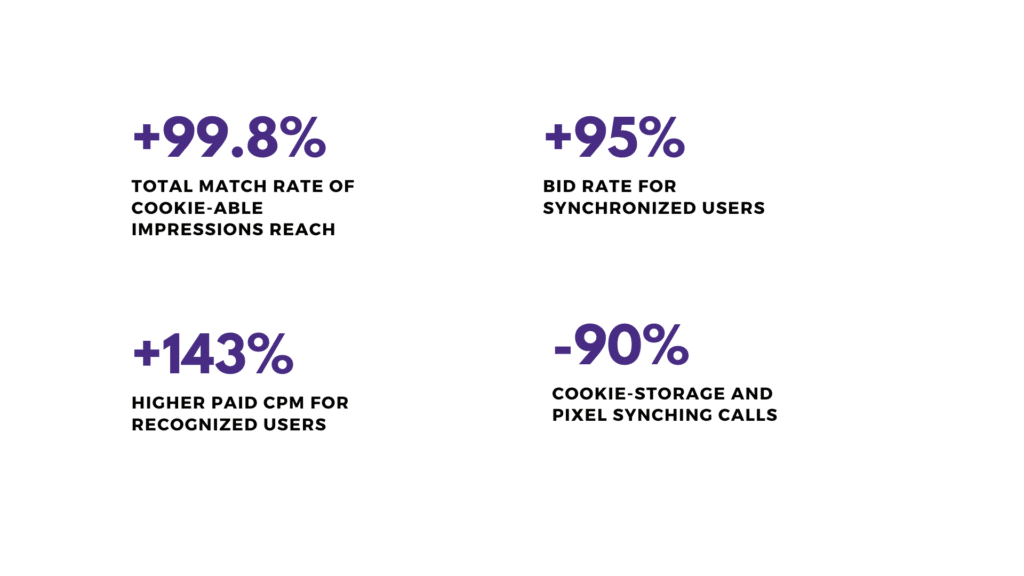 Are Universal IDs and First-Party Data the Same?

First-Party Data is something that you collect directly from your users via Subscriptions, Surveys, feedback, etc. whereas the universal ID is a user identifier (user ID) typically created by the prominent ad-tech consortium/company to provide a shared identity to identify the user across the supply chain without syncing cookies.  In other words, first-party data (CRM) and offline data can be used to create universal IDs. But they aren’t the same.

Note that publishers can create their own site-specific user ids; not universal IDs. But it might change in the near future.

There are a handful of ID solutions available in the market as we speak, but the efficiency of them varies. In fact, some solutions had to shut down as they simply wouldn’t be able to exist as a viable alternative once the 3p cookies are gone. We’ll take a look at some of them in detail here.

The TradeDesk is one of the largest DSPs and it has an excellent proprietary identifier called Unified ID. Aiming to benefit the advertising community; it helps to grow the match rate close to 100% and boost the advertisers’ ROI and publishers’ programmatic revenue.

Besides, The TradeDesk provides IDs at a free cost to its advertisers, agencies, and DSPs. Publishers can leverage the IDs as well.

Though the initiative is taken to create a simplified version of cookie-syncing, The Trade Desk’s solution requires the integration of SSPs, Ad Exchanges, DSPs, and other data companies with the Unified ID to synchronize the data well. In contrast, DigiTrust’s ID solution doesn’t require integration.

“The objective has always been to go from many IDs to some IDs, not just to one.”

The unified ID has its drawbacks. One, it gives too much power to one industry player. Basically, the entire industry will rely on The Trade Desk to identify users on the open web (if Unified ID becomes the only solution). Two, it is vulnerable to ITP and Chrome’s upcoming browser changes.

Update: The Trade Desk is working on UID 2.0 and it is designed to work without 3p cookies. Rather than managing and operating the solution on its own, TTD handed it over to Prebid.org.

ID5 is an industry-shared solution that can be used by any publishers and ad tech companies that want to skip the cookie-syncing process with their partners. It can provide publishers immediate access to the data. By the time we wrote this article, ID5 had 40+ publishers and ad tech platforms, and managers more than 2.5 billion advertising IDs per month for its partners.

It is available as an API to the publishers and can be integrated into the CMS and also Prebid supports ID5. The publishers can utilize the ID5 in header bidding auctions on the websites by using the User ID module. To clear the basics, here’s a flowchart of how ID5 connects publishers and SSPs: 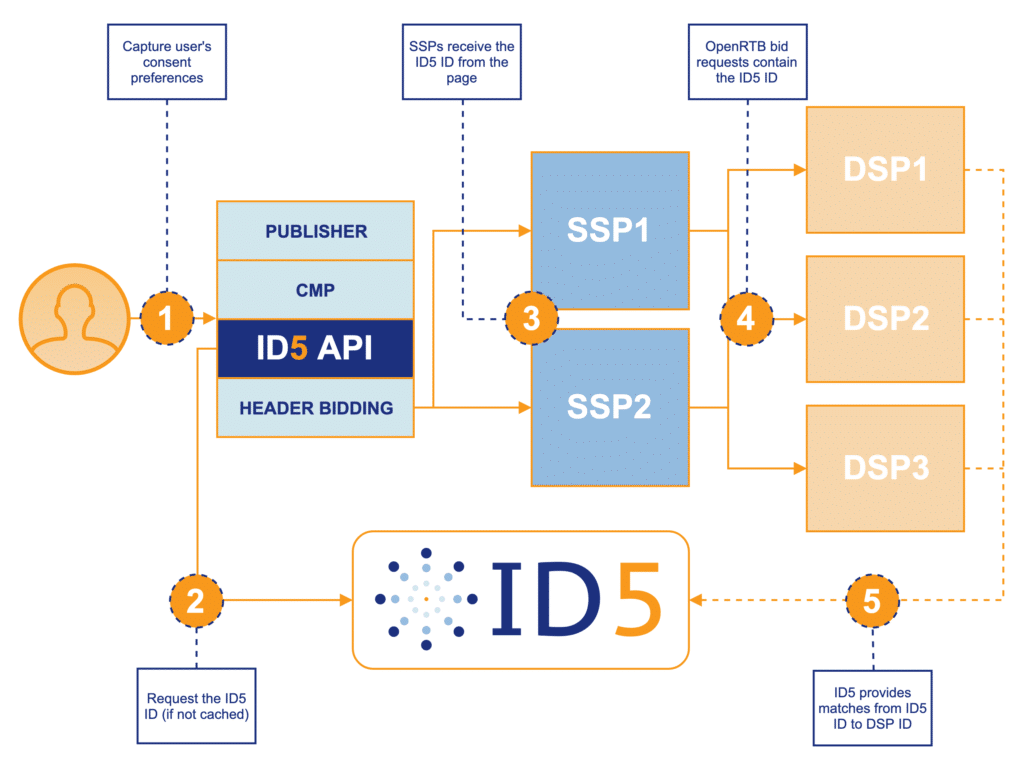 While technically ID5 stores its IDs on publishers’ first-party cookies, it still can be affected by browsers’ pursuit of tracking prevention techniques. But ID5 claims that the IDs can function when Chrome drops off third-party cookies. So, how ID5 Universal IDs will work without third-party cookies?

By using the combination of soft signals and hard signals to link its IDs. While hard signals represent hashed email addresses, login alliance IDs, etc, soft signals include data points like IP address, timestamp, URLs, etc., and are used when there are no hard signals.

“The need to use third-party cookies is only related to the fact that these IDs are platform-specific and are always third parties on a page. So once you’ve created a common identifier, then [the] storage of it is less of an issue. If [the cookie] is provided by the publisher, then storage of it isn’t a problem anymore. The publisher can store [that] ID anywhere.”

What is it based on? Both first- and third-party data.

LiveRamp released its ID solution in 2016 when most ad tech companies didn’t feel the necessity of a Universal ID. Dubbed as ‘IdentityLink’, it can create users’ ids with the help of third-party behavioral data, first-party data (e.g. from CRM), mobile app online data as well as offline data.

IdentityLink assigns an anonymous identifier to a specific individual across multiple devices and channels. According to LiveRamp, the ID solution can enable advertisers to limit their advertising frequency to specific users. Instead of separately syncing the cookies, SSPs and DSPs can integrate IdentityLink in their bid-stream and reduce the mismatch rates. Here’s how the ID solution works:

Moreover, IdentityLink has the capability to work with matched cookies and mobile device identifiers as well. Thus, the data and identity of individuals can be stored longer than browser cookies. Not only this, but the company also provides an identity graph based on the deterministic data of offline and online users.

“IdentityLink is by far the most prevalent (non-walled garden ID) in the market. Almost everyone has a connection into LiveRamp.”

What is it based on? Both first- and third-party data.

As the name suggests, PubCID is generated by the publisher and can be shared with anyone they want. Note that it is a domain-specific ID as opposed to other cross-site IDs. So, use cases are limited. It is available as a plugin and can be integrated into WordPress. Also, it can be used by the publishers who have implemented Prebid on their website or server.

SharedID is a hybrid identity solution that helps publishers to leverage user IDs to serve personalized and targeted ads — now and after the death of third-party cookies. How? It allows publishers like you to set user ID as first-party and third-party components.

Advertising ID Consortium is also an independent and open identity solution that can be used by ad tech companies.

Though Advertising ID Consortium isn’t as active as other ID solution providers, it is one of the solutions that can work without third-party cookies. The involvement of LiveRamp’s IdentityLink helps the publishers to generate the unique user’s ID.

In addition to the above-mentioned Universal identifiers, there are several other companies such as Brightpool, Criteo, Parrable, and many more that are working to smoothen the process of cookie-syncing. Though the IDs have benefits, they have a few disadvantages as shown below: 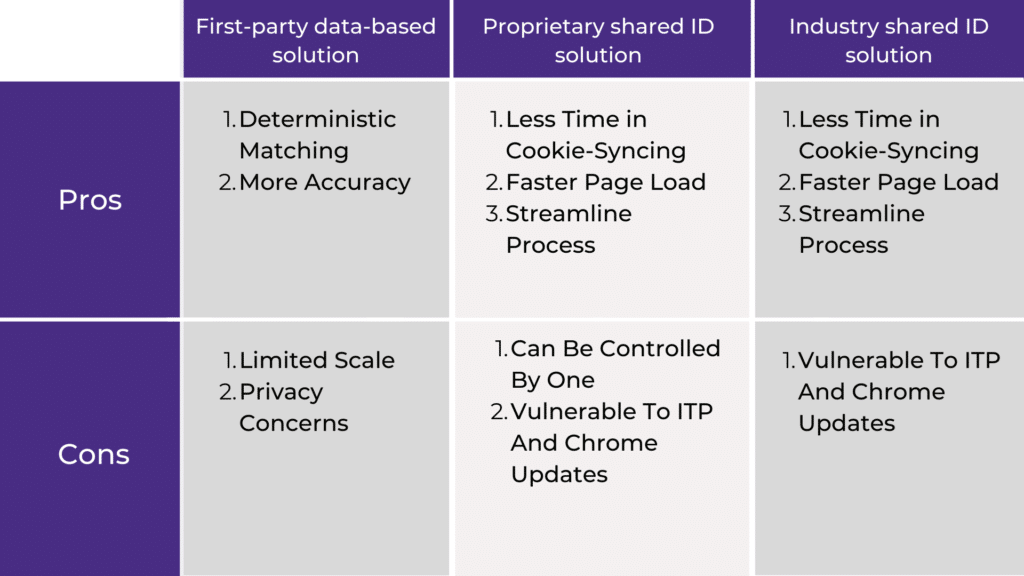 Universal IDs have been here for a while now. It started gaining popularity since the industry started shifting towards a privacy-concerned and cookie-less world. According to eMarketer, US advertisers will spend $2.6 billion on identity solutions by the end of 2022. From our point of view, Universal IDs help in the audience segmentation and can be a backbone for targeted advertising. But we still have to wait and see what happens when the cookies are dropped out of the browsers. Have any questions? Let us know in the comments.

Next Post
An Overview of Charl...
0 Comments
Leave a Reply Cancel Reply