SharedID – An ID for the Open Web

As you’re here, we assume you are familiar with the universal or shared ID solutions and why they are necessary to retain targeting and attribution (at least to some extent) in the post-cookies era. So, we don’t want to start from the basics and talk about what you probably know. Let’s dive directly into ‘SharedID’.

Replicating the Success of Header Bidding

As it’s a collective effort from the different stakeholders (publishers, sell-side and buy-side platforms, advertisers, etc.), Prebid managed to evolve its products at a much faster pace (think Modules) and ensured there’s always a way to comply with the privacy laws and regulations and changing consumer privacy preferences.

But the truth is, we built on top of what we have and figured a way to become compliant. Chrome announcing that it will phase out the support for third-party cookies — made it quite clear: we need a long-term solution that’s centered around the users.

SharedID is Prebid’s foray into Identity space with a much broader and foundational goal: “Keeping publishers in control of their data, protecting user privacy and rebuilding a better internet”. Simply put, Prebid aims to come up with the most complete identity solution that works today and tomorrow while enabling publishers to stay in control of their users’ privacy.

SharedID is a hybrid identity solution that helps publishers to leverage user IDs to serve personalized and targeted ads — now and after the death of third-party cookies. How? It allows publishers like you to set user ID as first-party and third-party components. Let’s start with the simple one.

Say you’re using the SharedID module, when a user loads a page, the module will send a call out to SharedID (sharedid.org/usync) so a 3rd party cookie can be set. It will hold the user IDs which then will be synced with other demand partners (bidders) competing to win your ad impressions.

This is how all the third-parties set cookies and create user IDs today.

With SharedID, publishers can also create and store a unique user id in the first-party domain and make it available to bidders (demand partners). This is similar to IDFA and AAID and it can help especially in iOS and MacOS environments (in the future, Chrome as well). Demand partners who’re supporting the ID solution can pick it up and use it for targeting purposes.

As per the Github repo of SharedID, here the first-party domain is “prebid.pub.com”. Publishers have to declare the domain as “SameSite = lax” — essentially, saying that the prebid.pub.com is first-party, not third-party, and then use the same for creating and storing IDs.

So, if all the publishers are using the same, then Prebid will own and manage the scaled cookie space (or Universal IDs).

Note: Publisher Common ID (PubID) is the module used by publishers to create user IDs and store them in a first-party domain. It’s one of the user id modules on Prebid. Prebid simply took it over and combined it with sharedid.org third-party ID — creating ‘SharedID’.

Preparing for the Cookieless Future

The new solution (SharedID by Prebid) basically links the PubCommon ID with the shared.org ID to create a “scaled coverage of this first-and-third party paired identifier”

As Jochen Schlosser, CTO at Adform puts it “it is a hybrid identifier, combining the first-party ID with a third-party ID already functioning in the ecosystem. The first-party element can be utilized now and in the future, but if the publisher hasn’t yet adopted it, the third-party aspect can work in the current format at scale.”

What are the Benefits of SharedID?

Why is it More than Just an ID?

The reason why we’re interested in the recent development of Prebid SharedID is, it’s much more than an ID.

Prebid considers this as the place for independent ad tech companies and publishers to come together to derive a long-term solution. It aims to group the stakeholders to test, iterate, and share proposals to fix the current and upcoming issues regarding identity and targeting.

The best part? One of the primary goals is to ensure publishers are having more control over their data and audience, thereby creating a supply chain that respects users’ privacy. But that’s not it.

SharedID can become the ID for the open web.

ID for the Open Web?

Most of the ID solutions that are expected to work without 3p cookies are based on personal data like email addresses, phone numbers, etc. (ID solutions can, for example, convert the email ids into hashed, irreversible, unique identifiers). But for the majority of the publishers, creating a log-in system and expecting users to sign up via emails is a far fetch.

So SharedID aims to help those publishers and complete the other ID solutions. Let’s say you have the users’ log-in info but you don’t want to pass them to the buy-side in any form, then you can use SharedID.

Secondly, publishers have the opportunity to team up and create audience segments (based on first-party IDs) and attract buyers to run campaigns at scale.

“The main goal of this is to allow segment creation to move out of the DSP into the SSP, where we can allow publishers to securely interact with each other without leaking that ID into a device graph.”

How to Get Started with SharedID?

You can use PubCommonID and SharedID user modules available on Prebid. There’s no registration required; you just have to add the module to your Prebid package.

When you use PubCommonID, you have the option to enable Sharedid.org (third-party ID) as well. 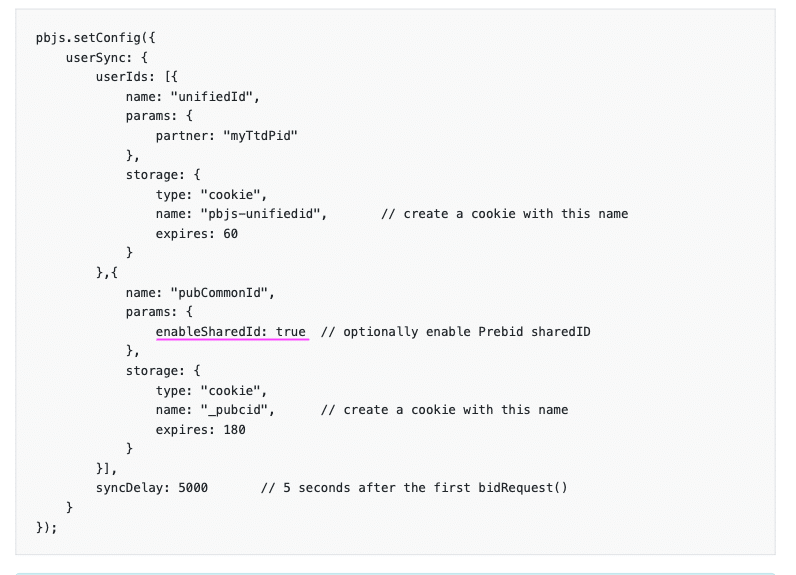 While there are several other ID providers in the market, SharedID seems to work towards a solution that fits the open web. And, in the post-cookie world, with SharedID in place, publishers can have greater control over their data and how it flows into the ecosystem. Not only then control who gets to see and bid on their data, they have the opportunity to team up to create scaled audience segments — built on top of first-party data to court media buyers.

Last but not least, SharedID will have a unified opt-out as opposed to opting-out of companies — individually thus making it easier for consumers to protect their privacy.