Automatad Team
If publishers are only realizing 51 cents out of every dollar an advertiser spends, that’s also not good for advertisers. Streamlining access to supply won’t only benefit publishers, it will also help advertisers spend more efficiently.
Share Tweet Share

When the study from ISBA mentioned that publishers receive just 51% of the amount spent by advertisers, it caused a lot of discussion in the industry (not a surprise). From Digiday to AdExchanger to open forums like r/adops, everyone was on the topic. Lack of transparency and involvement of too many intermediaries are the main reasons behind such problems.

It wouldn’t be a surprise for local publishers to look at the numbers though. While it’s revealing, local publishers know that they are relying on too many unnecessary intermediaries and have been struggling to ink deals with media buyers. And, that’s why they need extra support whenever a crisis like a coronavirus pandemic or a cookie apocalypse hits the industry.

NewsPassID is an attempt to provide the required support to the local news publishers by improving transparency and supply path while introducing the scale equivalent to national news publishers.

NewsPassID is a single sign-on solution created to build a cleaner supply path for local news publishers and help them monetize their first-party data. It is developed with the help of NewsNext, a strategic initiative of the Local Media Consortium. It tries to solve a long list of problems that we’ll discuss later in this article but let us try to understand its background first.

What is the Local Media Consortium?

Local Media Consortium is a group of local newspapers, broadcasters, and online news outlets based in the US and Canada. Being in a group helps them achieve what they couldn’t get individually — providing large-scale business opportunities to buyers interested in local news media — including ad-tech giants like Google and Facebook. When the huge reach of the combined group is on the table, the consortium can negotiate deals that local news providers cannot do on their own.

So, how big is the reach of the consortium? Well, quite big!

What’s the reach of the Local Media Consortium?

It has more than 5,000 local news sites and 90 local media companies under its hood including Gannett, Cox Media Group, McClatchy, etc. To be precise, LMC claims to have close to 200 million monthly active users. Here’s how it compares to other media channels: 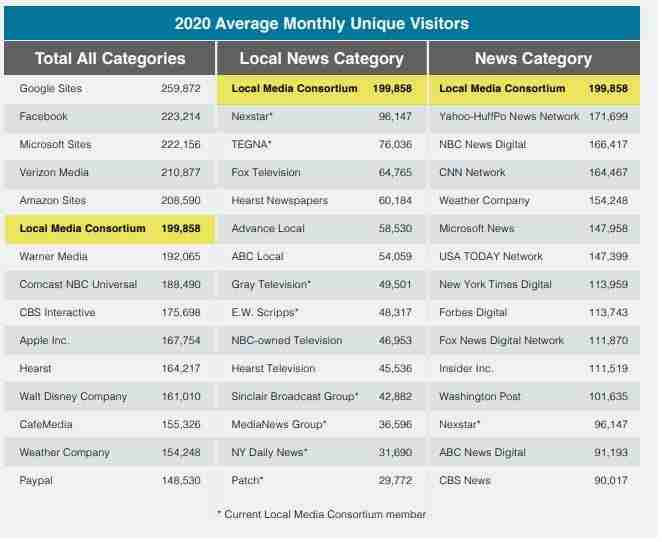 What is NewsNext, and what does it try to solve?

What is LMC’s NewsNext initiative?

NewsNext is an initiative by the Local Media Consortium. Under this initiative, LMC has tried to find different challenges faced by local news outlets in their economic growth. To do so, it has conducted a study with Magid, a research firm. And came up with a list of problems hampering the revenue growth: 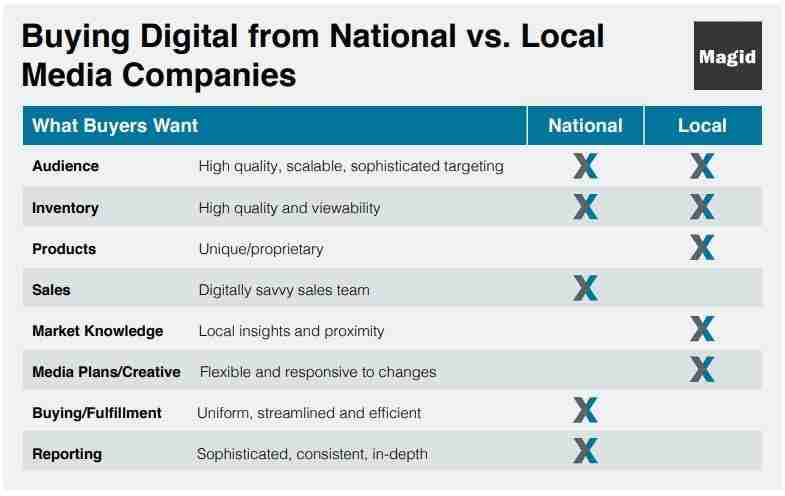 Apart from the above points, there are pre-existing problems that make the survival of local news publishers even harder. Examples include less appetite among consumers to pay for digital news, too many undeserving competitors due to low barriers to entry, an increasing gap in the buyer/publisher relationships due to intermediaries, too many constraints on audience data because of privacy policies from governments, and more.

We understood that local news publishers are facing a lot of challenges and NewsPassID will help them, but how would it do so? 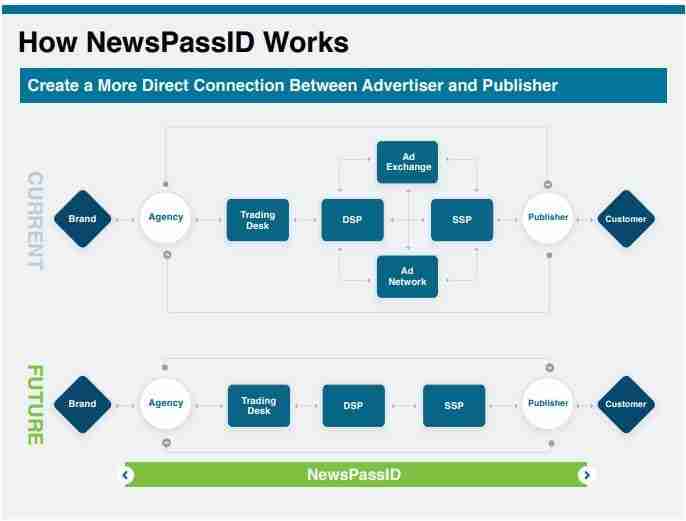 If publishers are only realizing 51 cents out of every dollar an advertiser spends, that’s also not good for advertisers. Streamlining access to supply won’t only benefit publishers, it will also help advertisers spend more efficiently.

– Scott Cunningham, Former GM of the IAB Tech Lab and a contributor to NewsNext Initiative 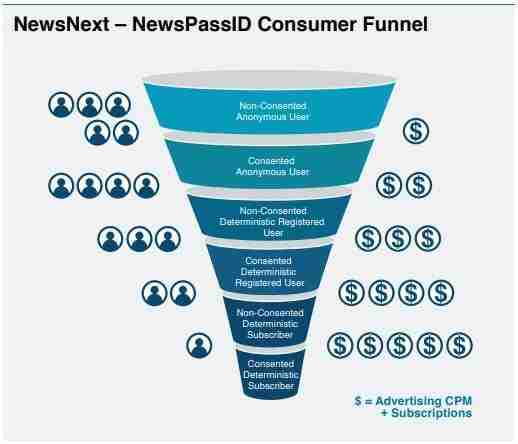 From being a non-consented anonymous user to becoming a registered subscriber, the consumer can choose the degree of data he/she wants to share to access the publisher’s content. As the consumer moves towards the bottom of the funnel, the revenue keeps increasing with both targeted ads and subscriptions. Undoubtedly, publishers have to deliver value to convince the users to provide data or pay for the content.

NewsPassID is at its pilot stage right now. It’ll begin integrating with the buy-side in Q3 2021. It’s made for local news publishers who are members of LMC. Although the idea of a single sign-on isn’t very new, it’s too early to predict anything about it. So, if you are a local news publisher from the USA or Canada, you can read LMC’s whitepaper on their site to know more. Please note that even if you already have another single-sign-on service active on your site, you can still use NewsPassID to manage advertising consent.

Stay updated on the upcoming updates on NewsPassId and other similar solutions with our weekly roundup. Read about more identity tech on our blog dedicated to Universal IDs.

The Ultimate Guide To Unified ID 2.0