Automatad Team
When Google announced that 3p cookies will be phased out soon, the hardest question to answer was — ‘how can one do retargeting?’. As retargeting requires you to target specific, individual users, it was quite tricky to imagine how it can be done without cookie ids (aka user ids). Today, we’ll look at the answer — TURTLEDOVE.
Share Tweet Share

Google Privacy Sandbox is currently a set of proposals for different APIs. When implemented together, they’ll provide anonymous browsing and behavioral targeting capabilities. Each API has its objective. TURTLEDOVE is one of the proposals from google that can make retargeting possible after the third-party cookie is phased out. Let’s dive right into it.

A Brief About the APIs

What are the different API proposals under the Privacy Sandbox project? There are dozens of them! We have already discussed them in detail in our previous post, here’s a quick refresher:

The full form for TURTLEDOVE is Two Uncorrelated Requests, Then Locally-Executed Decision On Victory. It describes the working mechanism of the API. It becomes clear when we dissect the name:

The auction takes place with the help of two uncorrelated requests sent during the ad delivery process. One is a contextual ad request whereas the other is an interest group-based ad request. We’ll discuss them in detail when we’ll understand the process step-by-step.

Then Locally-Executed Decision On Victory

The auction will take place on the client-side (hence the term, locally-executed) b/w the aforementioned ads (contextual and interest group-based ads). The browser will decide the winning ad and deliver its creative.

How does TURTLEDOVE work?

Google has explained one of the ways to use TURTLEDOVE for retargeting. Let’s understand it one step at a time. 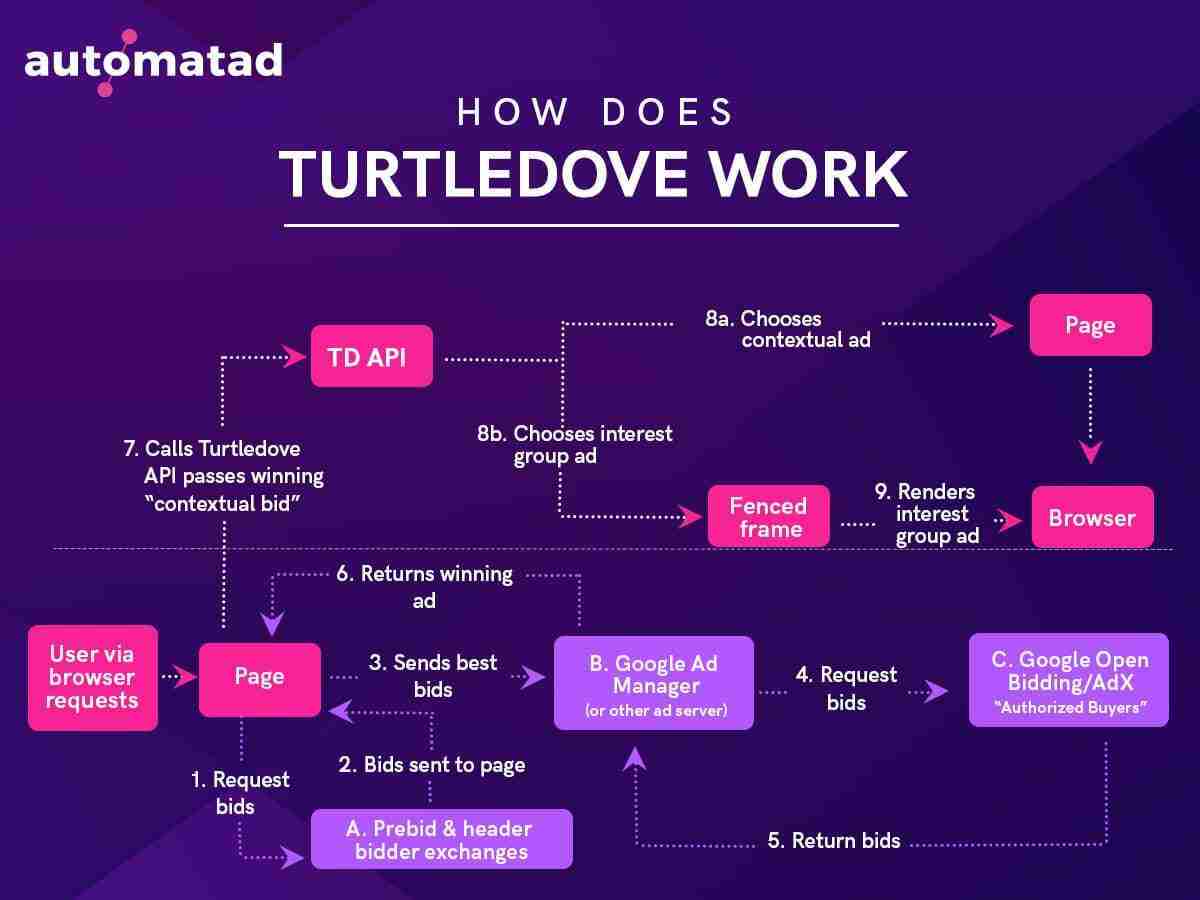 *The ad response from the network will be cached for only a limited time, that’s why the browser wants to make sure that the user comes across the ad network regularly.

It includes a decision logic URL that’ll help in determining the winner in the auction that’ll happen later. Until then, all this info will remain saved in the browser.

That’s right. The ad network will send the retargeting ad to the browser but the browser won’t display it now. It’ll wait for an opportunity to get another contextual ad from the same ad network (explained in the next step)

In the response, the ‘ad-cbor-url’ field contains the location of the web bundle that has the ad. The ‘auction-signals’ field gives the bid value for different scenarios. The ‘decision-logic-url’ will fetch a script that’ll tell how the winner has to be decided.

Here’s an example of fetched script:

Other information like page URL, ad location, ad size, etc, is also sent along with it. The ad network now responds with the contextual ad and a request to conduct an auction between the contextual and the previously fetched interest group ad.

By requesting an auction, the ad network gets the chance to display its retargeting ad for the group. If the contextual ad loses the auction, the user will see the interest-based ad. So, retargeting is done. .

The Willful IP Blindness proposal talks about masking the user’s IP so that no ad tech providers can identify the user through correlation. An IP address can reveal a user’s location and correlating it with other data points can help in building the user’s profile. In other words, the IP address itself is a unique identifier. So, masking the IP can prevent the problem.

As the ads are supposed to target groups, they’ll know the user’s interests. Once rendered, the ads can also know what’s on the page, what’s there in other windows of the browser, it can also send pieces of information from one page to the other, etc. To prevent the information exchange with the surrounding page, the proposal suggests rendering the ad in an opaque environment.

Additionally, the ad will be delivered in a web bundle, rendering happens entirely locally, the iframe wouldn’t allow additional network activity until it is clicked. In this way, the user data can be prevented from reaching bad actors in the outside environment.

If you get an overview of the different proposals under Privacy Sandbox, there are chances that you develop a misunderstanding between FLoCs and TURTLEDOVE. It is because both of them deal with targeting a group of users and the grouping is based on their interests. Understand and remember these basic differences to avoid any confusions:

The cookie will be replaced with a new algorithm that analyses the user’s behavior, preferences, habits, etc. It’ll place the user in the cohorts that hold other people with the same behavior. So, the users in the same cohorts (or FLoCs) will see similar ads.

Privacy Sandbox is in its development stage, which means you can expect changes in the proposals. Not every proposal has to be accepted and there can be multiple ways for achieving the objectives of the Privacy Sandbox. For instance,

What are the alternatives for the TURTLEDOVE proposal?

Criteo has proposed SPARROW as an alternative to google TURTLEDOVE. Google itself gave another proposal called PIGIN before coming up with TURTLEDOVE.

So, expect more such developments in the future. We suggest you subscribe to our AdTech Weekly Newsletter for Publishers so that you are not missing any updates. Also, we’ll keep this article updated with every new development related to TURTLEDOVE.

Is Google Privacy Sandbox Future of the Targeted Ads?