Better Ads Vs. Acceptable Ads – Everything You Need to Know

Automatad Team
Want to ensure you are running the acceptable ads to ensure better user experience? Then, you need to keep up with both the standards.
Share Tweet Share

The ‘Better Ads Standards’ and the ‘Acceptable Ads Standards’ are commonly heard terms in the ad-tech industry, especially by the people dealing with ad blockers. While it is evident from the names that both of them exist for common goals, there are many differences between the two. Let’s sort them out.

The Process behind the Standards

Both standards are based on their own separate criteria. The methods of coming up with their criteria, the size of the surveys, and the number of tested ad formats vary significantly in both the studies.

Thousands of paid participants are surveyed by the Coalition for Better Ads to come up with the standards. In the initial phase, more than 25,000 users from North America and Europe were surveyed for 55 desktop ad experiences and 49 mobile ad experiences.

The findings from the initial phase were used to find the least preferred and most annoying ad experiences that can lead users to install ad blockers. In the later phase, the research was conducted in  Asia, Latin America, and Africa for further refinement in the results.

For mobile ads, around 2000 mobile ad-blocking users were surveyed in 2017. The respondents rated 12 different ad types on a scale of 1 to 5. The findings were reviewed by the committee. After the review, the acceptable mobile ads were finalized in 2018.

The Difference in Approach

There is a huge difference in how both organizations make the industry adopt their standards. The Coalition for Better Ads has a voluntary approach where the parties in the ad tech industry can choose not to follow the Better Ads Standards. Whereas, the Acceptable Ads Committee has a more forceful approach where it blocks the ads of any party that doesn’t follow the standards. 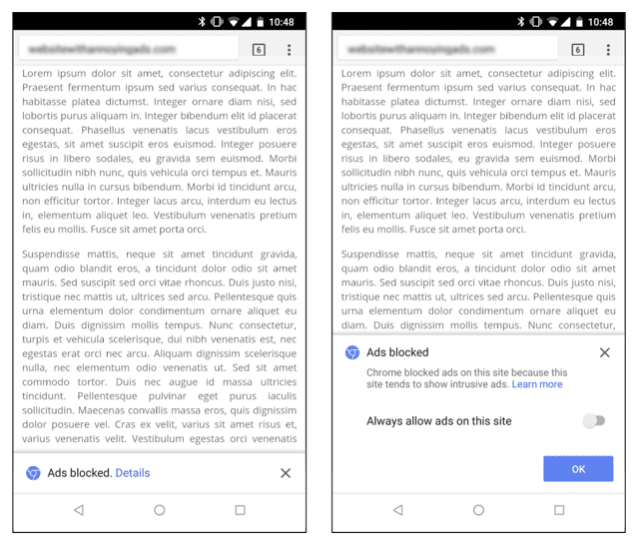 The implementation of the Acceptable Ads Standards are more punitive in nature. Due to this nature, the initiative and the company behind it (Eyeo) has faced a lot of criticism and controversies. First, the publishers, ad tech providers, advertisers, SSPs, and all other participants in the ad delivery process have to adopt the standards. Then, they’ll have to get whitelisted by the Acceptable Ads Committee. If you’re large enough then you have to pay for getting whitelisted too

“We qualify an entity as large when it gains more than 10 million additional ad impressions per month due to participation in the Acceptable Ads initiative. For a large entity, our licensing fee normally represents 30 percent of the additional revenue created by whitelisting its Acceptable Ads.”

After fulfilling all the criteria, you’ll be able to serve ads to the ad-blocking users. But the users also have the option to block all the ads (including the acceptable ads). If the user decides to block all the ads, then your ads won’t be delivered whatsoever. The Adblock Plus website says that 83% of its users do not mind seeing Acceptable Ads. So if the remaining users are blocking all the ads, then we can say 17% of ads are still getting blocked despite being ‘Acceptable’.

The Acceptable Ads Committee says that it doesn’t take any fee from small entities but the parties in the ad tech industry are connected closely to each other, so if one party faces loss then it can delegate the losses to its peers. Companies like Google, Microsoft, and Amazon are already paying huge sums of money to Eyeo. The CEO of IAB once called the Adblock Plus an extortion based business. In another instance, the Acceptable Ads Manifesto has been called a ransom note. There have been many allegations and responses on the topic of Acceptable Ad Standards. Overall, we can say that Acceptable Ads is a controversial initiative.

The Better Ads Standards gives us 4 desktop and 8 mobile ad experiences to avoid. We have already covered them in our Ad Experience post.

For complete specifications of Acceptable Ads, you can visit their official page.

As a publisher, user experience has a paramount importance. Regardless of whether an ad standard prohibits an ad experience or not, you shouldn’t implement it if it spoils user experience. Revenue is another factor while following standards.

For instance, Acceptable Ads do not allow refreshing ads, pre-roll ads, rich media ads, expanding ads, overlay in-video ads etc. So, if you run such ads but you have to stop them to comply with the Acceptable Ads Standards, then calculate the revenue that you’ll lose by doing so. If the present revenue loss due to ad blockers is lesser than the potential loss by scraping the current ads, then it’s wise to avoid enrolling in the initiative. You’ll still be abiding the Better Ads Standards while doing so.

Next Post
Header Bidding Vs Re...
0 Comments
Leave a Reply Cancel Reply