Header bidding — a technique that started to deal with the inefficiencies from the waterfall technique or daisy-chaining, eventually became the de facto way of running programmatic auctions. If you’re a digital publisher looking to move past ad networks and Google Ad Exchange, you’re likely to end up implementing header bidding (client-side or server-side).

While there are several advantages including — jump in eCPM & revenue and increased transparency & control, page latency has been considered a drawback that should be addressed.

If you use a managed header bidding provider, you’re sorted out. For example, at Automatad, we continually invest and maintain our server-side infrastructure to ensure our publishers aren’t facing any latency issues. On the other hand, if you have an in-house team and extensive resources (team & infrastructure), you’ll be able to reduce the latency to an extent. At the end of the day, latency wouldn’t be an issue.

So, if you are a publisher who doesn’t fall in either of the two buckets and still want to leverage header bidding, meet — Post bidding.

Sidenote: You can implement header bidding (or pre-bidding) yourself. But there are prerequisites to partner with the SSPs and ad server setup requires at least some technical know-how.

So, What is Post-Bid or Post-Bidding?

Post-bidding is a way for publishers to directly connect with multiple demand partners and run simultaneous auctions to get their best bids — after the ad server delivered the creative.

Yes, it’s the same as header bidding or pre bidding with one important difference — unified auction happens after the ad creative from the post bid line item is delivered. Hence the name, post-bidding.

Let us show in a simple diagram: 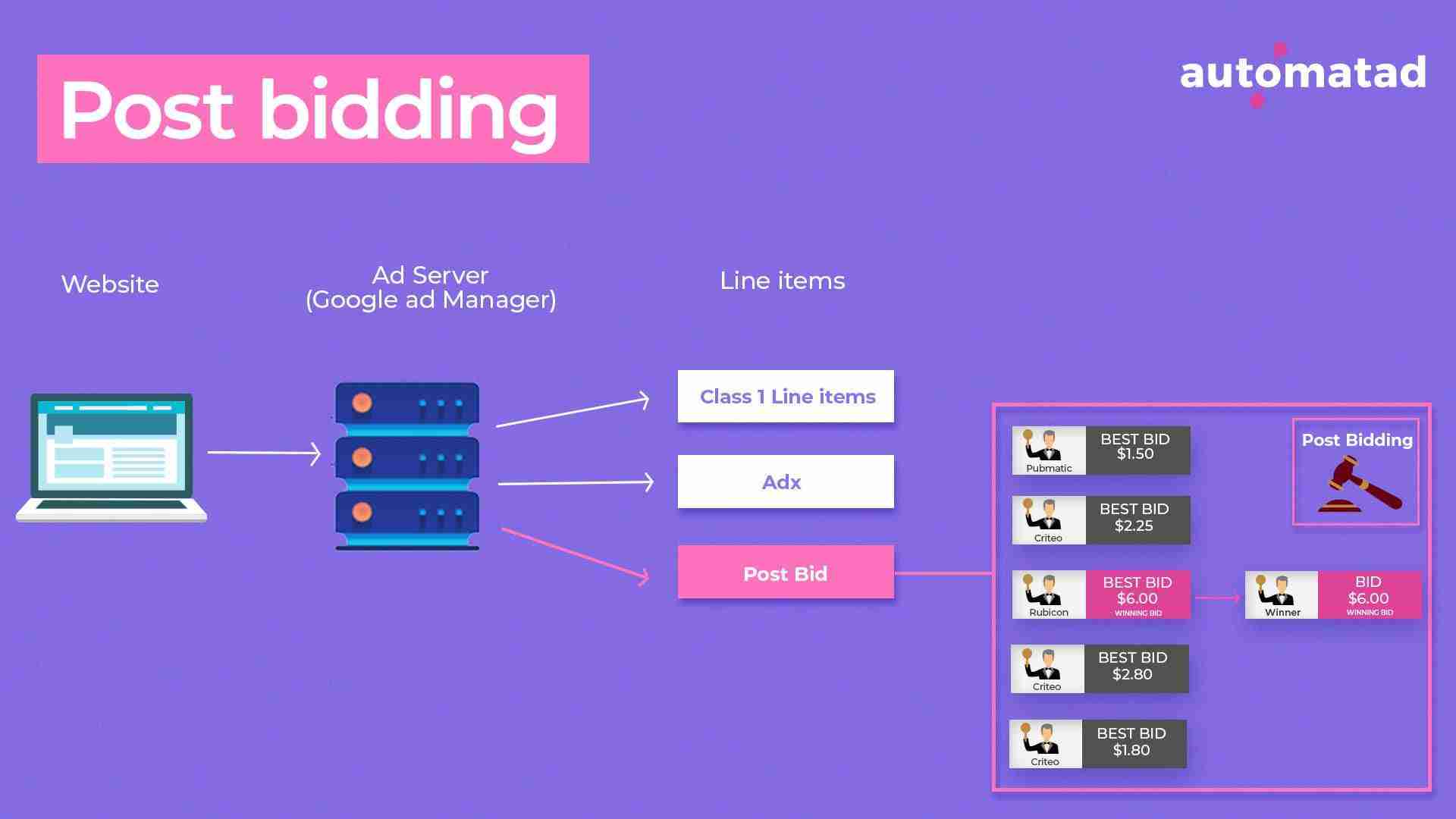 Before we get into how it works, you should have a question. How can an auction happen once the creative is delivered? Well, in post bid, ad creative is nothing but a prebid.js tag (a third-party tag). So, if the post bid line item wins the auction, then the creative or prebid.js will render on the page. This, in turn, will call the demand partners and run the auction and serve the ad from the highest bidder.

How Does Post-Bid Work?

Alright. Let’s try to understand the complete process in the right order.

*As you know, there’s no more waterfall in GAM and it’s now a unified, first-price auction. Why do publishers go with header bidding then? Well, that’s for a different post. You can get some ideas here.

What are the Benefits of Post-Bid?

Are there any Drawbacks?

It has its drawbacks. We’ll start with the most important one.

In header bidding, you get a real-time price for your ad impressions from the multiple demand partners and then send their bids to the ad server for another round of auction with the demand sources and direct line items configured inside the server. In post bidding, GAM picks the post-bid line item based on the historic price (not real-time) as the real-time auction happens only after the creative is delivered.

Another problem is, as it’s not the real-time price, you aren’t allowing demand partners to compete with AdX on an even footing.

Post bid programmatic can help you run the auction on the client-side (so better match rates), have direct relationships with the demand partners, and provide transparency. It can reduce the latency compared to header bidding.

That being said, if you’re planning to try out post bidding — just because header bidding causes latency, don’t. You can resolve latency issues to an extent with a universal timeout, bidder-level optimization, etc. And besides, the header bidding script is asynchronous (it won’t even block the other content from loading). Else, you can consider footer bidding. The practice of running header auctions once the page elements/content are loaded.

As Google Ad Manager itself is running the unified first-price auction, you don’t have to run post-bid for the reason of parallel/simultaneous auction as well.

But if you don’t have the necessary resources and wouldn’t want to use any managed header bidding solutions, then post bid can work for you.