Q4 is here, and publishers are getting ready to bring in the new year. But with all the changes happening in the industry, what are publishers prioritizing for Q4 in 2022?

According to a survey by Digiday, direct-sold ads and subscriptions will be the most preferred revenue stream for more than 40% of publishers in the upcoming six months. These, followed by programmatic ads, video advertising, and branded content, round out the publishers’ top five focus areas from Q1 to Q3 2022.

However, the survey also witnessed a shift in priorities over the quarters, possibly due to economic instability. Where only 32% of publishers favored programmatic ads in Q1, the figure rose to 43% in Q3, leaving branded content behind. This reflects a diversification in revenue streams from publishers to embrace the effects of the economic storms.

The ordering of the five focus areas keeps changing per their revenue generation capabilities. To cope with the rising pressure of economic turbulence, publishers should keep modeling their business strategies to grow revenue. It’s also the right time to diversify the revenue sources.

According to the latest Digital Publishers’ Revenue Index (DPRI), publishers’ revenue from digital publishing increased by 12.3% to reach £154.8 million in Q2 2022. Adding £72.4 million, display advertising continued to be online publishers’ predominant revenue source. The sector witnessed an increase of 28.6% in revenue from the year before.

The next top two growth areas were online video (+7.1%) and subscriptions (+3.5%). Each category has its own challenges when measuring ROI, but they also offer opportunities for publishers willing to invest in them. 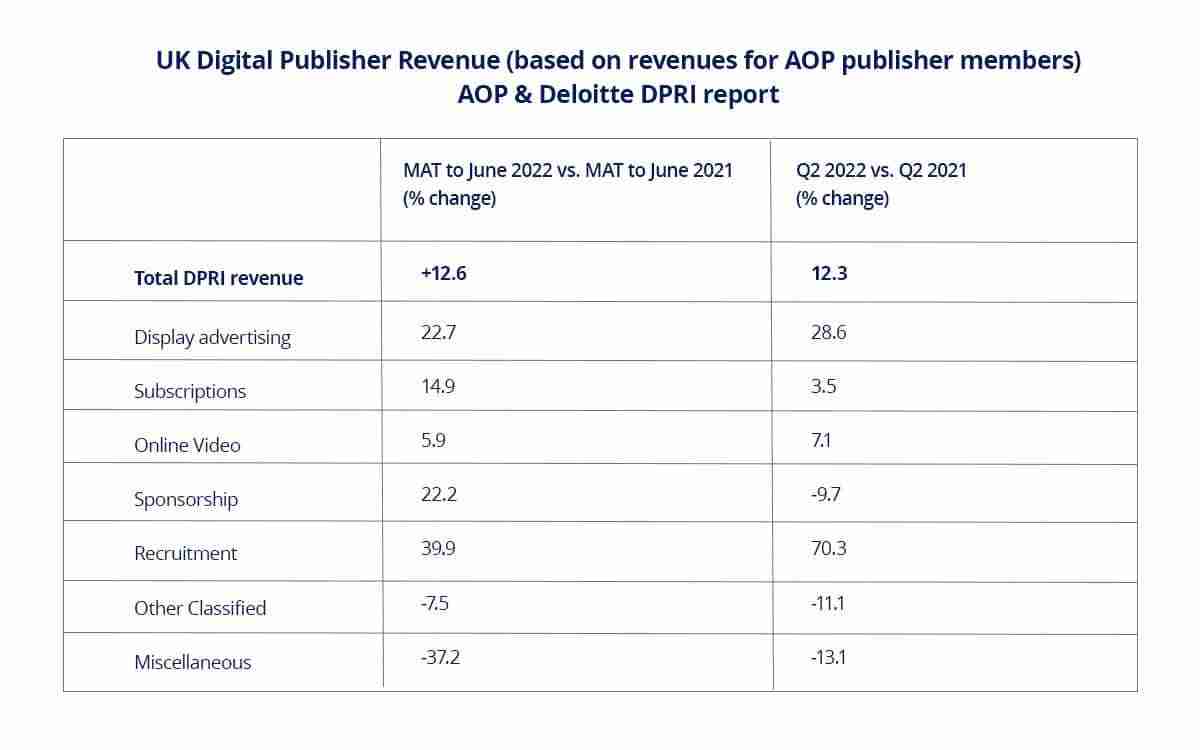 “With many consumers looking to cut back their spending due to rising living costs, publishers must remain agile in responding to changing consumer demands. Generating engaging, multi-platform content that is accessible for every consumer will be key to maintaining consumer interest and revenue growth over the coming months.”

This survey results bring an optimistic outlook to publishers, with over 50% of respondents reporting growth. The survey also found that, because of the ease of use and accessibility of publisher sites, users were consuming more content than they had previously.

Richard Reeves, Managing Director, AOP, says people love to read editorial content in a concise format on their smartphones. But long-form content is still in demand.

That said, the digital publishing industry is a fast-moving space with plenty of potentials for publishers to experiment and try new things. But since the market is so crowded and competitive, it can be challenging to determine which trends are worth investing in and which are just hype.

A close analysis of the market will help publishers make better decisions about where they want to invest their time and resources, especially as they brace for changes like cookie-less advertising, audience fragmentation, and ad blocking.

Should Publishers Look Towards Direct Deals Amid Recession?

It is no secret that direct deals benefit both – advertisers and publishers. They allow publishers to skip through the intermediaries and negotiate directly with the buyers for their premium inventories. It also ensures transparency in the process by precisely identifying the deliverables for publishers according to the advertiser’s needs.

In the past, independent publishers have faced difficulties competing with enterprise publishers and walled gardens. But as per Digiday, publishers are witnessing a rising affinity towards direct-sold ads from advertisers as the recession moves closer. In the first half of this year, programmatic guaranteed and private marketplaces accounted for 35% of the total spending on programmatic advertising.

“There’s a growing recognition among some marketers that it’s better to buy off premium publishers than just from the open web,”

The programmatic direct deal is a win-win for publishers and advertisers. Publishers get more flexibility in their ad inventory and can improve their yield by selecting premium buyers.

On the other hand, advertisers can access valuable data about visitors’ behavior on publisher websites, which can be used for retargeting campaigns or personalization strategies while minimizing ad spend waste in the process.

With programmatic direct deals, publishers can now obtain a larger share of the revenue from their inventory. In an industry where margins are already razor thin and ad fraud is a growing concern, this is a welcome development for publishers.

Related Read: What Is Programmatic Direct for Publishers?

IAB Tech Lab recently announced an update to ads.txt, a standard for supply chain transparency that allows publishers to list and validate their authorized sellers of ad inventory. The new update (ads.txt 1.1) steps in to bring supply path optimization right where the last version lacked.

The new update takes it a step forward by adding two variables that allow publishers to label a site’s parent company and the resellers and include them in the publisher’s OpenRTB (Real-time Bidding) bid request.

Ads.txt 1.1 introduces OWNERDOMAIN (for parent entity) and MANAGERDOMAIN (for resellers) variables, giving buyers a clear view of where the ad inventory is coming from. Whereas for publishers, the update opens doors to better transparency between buyers and sellers, boosting ad revenue.

“We shouldn’t throw away all reseller inventory. But buyers want to make sure they are making the right decisions about those supply paths.”

IAB Tech Lab created Ads.txt in response to ad fraud and brand safety concerns, but it can also help publishers protect their revenue from unauthorized resellers. The organization developed the protocol to prevent bad actors from impersonating legitimate sellers and driving up costs for advertisers, who often have no way of knowing where their ads are running online.

In addition to reducing the amount of money wasted on fraudulent inventory, ads.txt could also help publishers boost their own earnings by ensuring they’re getting paid for every impression they serve. Would you like to know more about it? Check out this Ads.txt guide to learn the role of ads.txt for a publisher in detail.

Why is Dailymotion Prioritizing Contextual Advertising?

While the scattered AdTech ecosystem looks for an ID solution to target users once third-party cookies go away, Dailymotion, a video platform and publisher, is going all in for contextual advertising, owing to their large treasure trove of first-party data.

In an interview with Adexchanger, Hamza Kourimate, VP and Global Head of Sales Marketing and Data Solutions at Dailymotion, said, “We do very little to no user-based targeting, and ninety-five percent of the time, we are using contextual targeting.”

Dailymotion is a video platform powered by an in-house video player. It utilizes first-party data to build complex contextual targeting frameworks. By transcribing the audio of every video and running a textual analysis, along with its metadata, Dailymotion analyses the content and associates every video with a series of topics per IAB’s content taxonomy.

This helps in accurate content categorization, which allows more efficient audience targeting. These categories are then passed in the bid request to make the inventory more valuable for advertisers.

Contextual advertising focuses on the content rather than the user’s behavior and hence ensures serving relevant ads to the audiences. Publishers can increase their ad revenue while securing users’ data as they don’t have to rely on cookies or behavioral data. It gives publishers a chance to serve relevant and non-intrusive ads to their users.

The Independent’s Strategy to Bring Advertisers

You would think it would be easy for a news publisher to get constant demand from advertisers, considering their traffic volume. But The Independent, a U.K.-based news publisher, has a different side to tell.

The Independent’s U.S. SVP, Blair Tapper, while talking with Digiday, pointed out that most advertisers fear they have no control over where the ads might end up, and this results in leading focus away from the news publishers that often show sad or adverse events.

To remedy this, Tapper’s team runs a textual analysis of the news articles to find keywords likely to be blocked by an advertiser. This way, instead of showing ads on articles that contain sad or negative news, for example, the demise of Queen Elizabeth, the publisher can swivel the ads toward more positive articles, let’s say, the Queen’s legacy and accomplishments.

Since news publishers cannot avoid publishing news and articles related to social causes, The Independent plans to focus on working with advertisers whose values align with theirs.

News publishers can use similar strategies to optimize their revenue generation capabilities. News publishers can increase their efficiency by removing negative keywords that might get blocked and by investing more in programmatic direct.

As per an article by Digiday, multiple publishers have raised the concern of a surplus of scripts slowing down page speeds and search engine rankings. This will ultimately result in more loss of revenue than what publishers stand to gain from ID solutions.

The truth is the current ID solutions in the ecosystem are not making it easy for publishers to pick one from the bunch and omit others. However, there is insufficient information and evidence to discern how these ID solutions affect publisher revenue.

The AdTech industry has seen a similar concern previously, with publishers facing poor website performance due to multiple scripts from SSPs and ad exchanges. Instead of stuffing multiple ID technologies, publishers should test solutions that offer the best results without compromising website performance until a more reliable ID solution emerges.