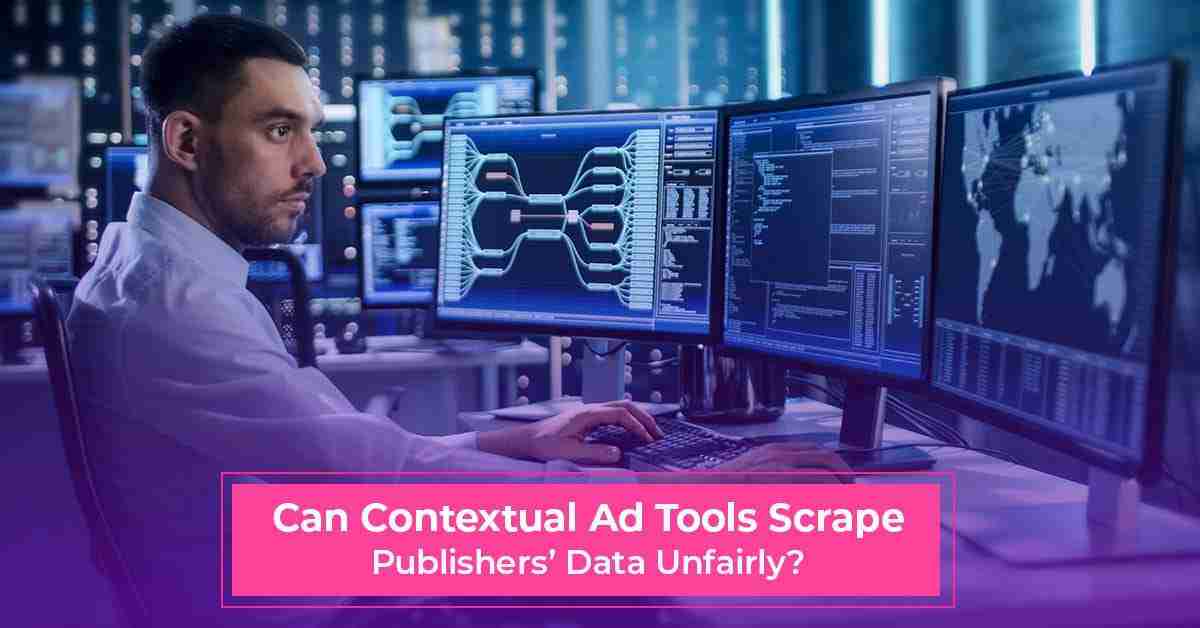 With the deprecation of third-party cookies and new privacy regulations around user tracking, the momentum for advertisers has shifted in favor of contextual advertising. However, to serve ads related to the content the user is reading, adtech vendors need to go through a  publisher’s content before serving the creatives. This raises a question – does contextual advertising scrape data?

According to a report by Morning Brew, several adtech vendors have been called out by publishers, including The Guardian, Vice, BBC, and others for violating fundamental intellectual property rights. Some vendors use contextual targeting tools to access publishers’ content and get deals from advertisers. This has prompted publishers to take matters into their own hands and get into direct contextual advertising deals with advertisers for a better ‘seat at the table’ by side-stepping the middlemen.

“Contextual targeting is valuable. There’s only one source of it—it’s publishers.”

Related Read: What is contextual advertising, and how does it work?

The Pandemic Was a Catalyst for Unprecedented Ad Revenues in 2021

The pandemic may have brought the world to a standstill, but it also served as an uncanny catalyst to boost publishers’ ad revenues in 2021. Advertisers put a hold on their campaigns and reduced their ad spends during 2020. However, this helped the industry bounce back by boosting the digitization of everyday life.

Advertisers entered 2021 with full pockets and a lot of motivation to generate revenue, which led to a 25.6% increase (YoY) in global advertising growth. The recovering economy gave advertisers the perfect opportunity to employ their increased budgets to improve returns. With the upsurge in digital media consumption during the pandemic, advertisers increased their ad spending on digital channels, a trend that has been years in the making. 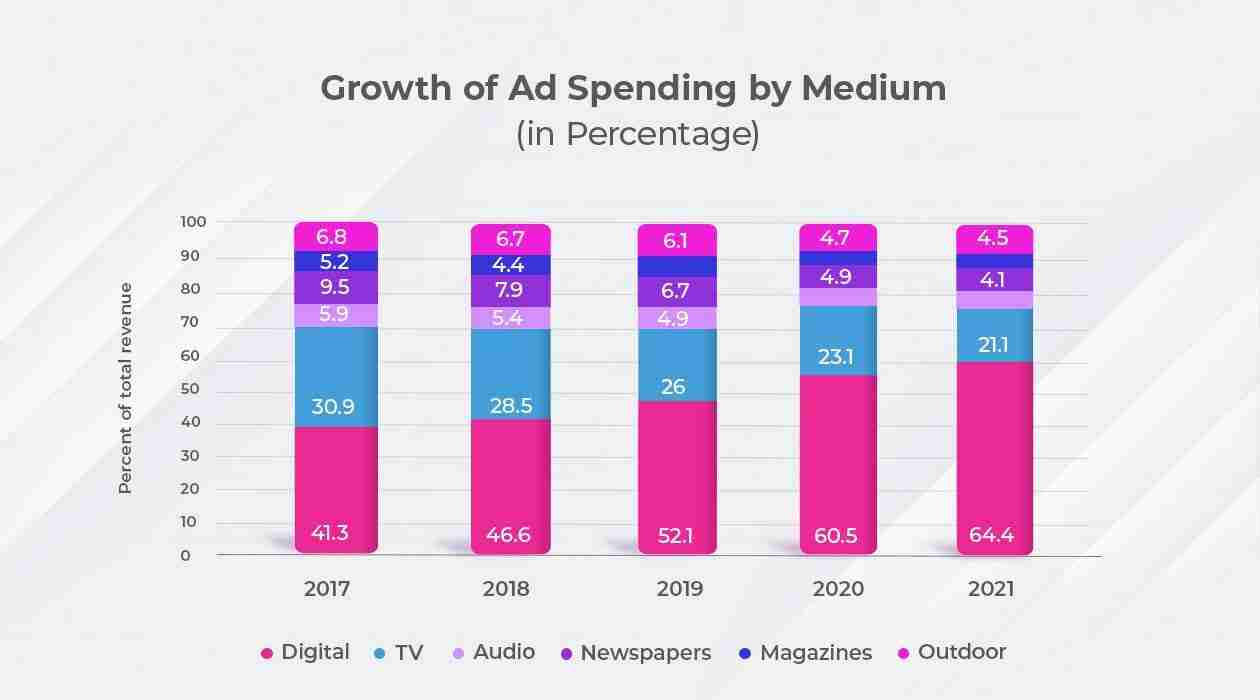 Publishers with a higher volume of audiences and multiple offerings to advertisers (newsletters, CTV, video, audio, etc.) capitalized on the digitization trend to generate much higher revenue in 2021. On the other hand, subscription-based publishers improved revenue by understanding their audience and building a deeper relationship with advertisers leading to better pricing, as per Piano’s SVP of Strategy Micheal Silberman.

“At the end of the day, we are looking to monetize attention, which has been moving from traditional channels to digital channels”

Another ripple effect of the pandemic was experienced by eCommerce-related ad spending that reached $28.25 billion in the year 2021, of which 13.4% was dedicated to digital advertising, as per data by eMarketer. Publishers such as Buzzfeed, with a strong inclination towards their e-commerce operations, benefitted from this surge in digital ad spend.

“Over the last two years, as people adopted more virtual shopping habits, we saw an acceleration of eCommerce as a core business initiative, and that means more advertising in the digital space,”

Since Apple launched App Tracking Transparency (ATT) in iOS 14.5, publishers have been forced to look for new avenues to collect user data. The ATT feature prevents apps from tracking and collecting user data from iPhone users, which is later sold to advertisers. Facebook’s parent company, Meta, estimates a loss of $10 billion in ad revenue in 2022 due to Apple’s privacy framework changes.

Even though users can choose whether they want to opt for ATT or not, the number is not promising for publishers. Only 37% of iOS 14 (and above) users have agreed to be tracked by apps.

Owing to the rapidly increasing attention towards user privacy, publishers are coming up with different strategies to build their first-party data repositories by focussing on data gathered from email lists, social media content marketing, and other methods. While some publishers are trying to cope with Apple’s ATT, others have shifted their focus to Android devices to generate user data. Although, it is believed that this strategy might not stick for long as iPhone users made up about 47% of the total smartphone users in the US in 2021.

The Crucial Role of Publishers’ First-party Data in Advertising

At the time of its launch, IAB Europe’s Transparency and Consent Framework (TCF) was hailed as one of the promising solutions for the advertising industry that can guide the stakeholders through the nitty-gritty(s) of GDPR. The framework was designed to protect the personal data of users and offered advertisers the confidence to track and profile people across Europe. However, the loopholes and discrepancies in TCF landed it in jeopardy as the Belgian DPA holds it in violation of GDPR on multiple fronts.

Since the news, IAB Europe has been appealing to the data regulator, but the future of TCF hangs in the balance. According to the reports, TCF may not be a fit for its purpose and allows the transfer of huge amounts of personal data in a highly opaque manner. In the wake of this, the industry finds itself back to the root of the problem of large-scale audience tracking. Digiday claims that advertisers are now moving towards ‘active curation’ by shifting their priorities to more direct deals and carefully selecting high-quality supply partners.

This focuses on publishers controlling users’ data as they play a crucial role in the data collection process for the ad industry. The shift to private data marketplaces has been in the works for quite some time, with private marketplaces and programmatic guaranteed deals taking up 31% of the total programmatic spending in 2021 as per Ebiquity.

Unified ID 2.0 (UID 2.0) is among the most popular solutions for the cookie-less world. Still, for now, it stands without an administrator as IAB Tech Lab CEO Anthony Katsur announced that the organization would not be taking up the role. The news seems a bit surprising, as IAB Tech Lab has been one of the biggest advocates for UID 2.0 in past years and even hosts its open-source code on GitHub.

As per AdExchanger, the CEO also stated IAB Tech Lab would continue its efforts to better the cookieless solution, but as of now, it has no alternative in mind to take up the role of administrator. This indicates that they may come around the possibility of being an enforcer of the ID solution in the future. However, IAB Tech Lab’s decision to back off from being the controlling body for UID 2.0 makes sense when you consider their recent troubles.

Speaking of the EU, The Trade Desk and LiveRamp have planned to launch a European version of UID 2.0 (known as European UID) in compliance with GDPR and TCF.

“Tech Lab is amenable to revisiting the role of running any necessary global infrastructure at a future date.”

A recent report by Poynter revealed that despite the pandemic, the publisher had a 48% YoY increase in total revenue in 2021. At the same time, their advertising revenue grew 66%. The publisher disclosed the strategies that got them to 370,000 subscribers with a 58% increase in digital subscription revenue.

While other legacy publishers slashed their prices to keep up with the diving economy during the pandemic, Bloomberg Media stood their ground and stuck to their prices. Currently, the publisher has a steep price of $415 a year for its digital subscription and $99 for the print magazine. Bloomberg knows that their prices are high, but they also have confidence in their array of digital products and different verticals each with focused content covering crypto, healthcare, automotive, entertainment, luxury, politics, technology, etc.

”The big picture goal is to reach diverse generations from rising professionals to established leaders and cut across all segments of society.”

In addition to driving revenue through subscriptions and increasing core audiences, newsletters can also serve as a way to reach global readers. By delivering pertinent content focussed on what the readers across the world want, right to their inboxes, publishers like CNN, Quartz, The Washington Post, and The New York Times are enhancing their international growth.

A report by Digiday reflected that Quartz, a US-based publisher, expanded their operations to Africa and Japan with their Quartz Africa and Quartz Japan newsletters, with plans to enter the Indian subcontinent with a new product line. Meanwhile, the news publisher, CNN, is in the final stages of launching a newsletter focusing on the Middle Eastern markets, to expand their international portfolio. The publisher already has a newsletter called ‘Meanwhile in China,’ launched in June 2021 and is based in Hong Kong.

On the other hand, legacy publishers like The New York Times have been attracted over 1 million digital subscriptions from readers outside the US, and over 80 newsletter and email briefings, spreading across Asia-Pacific and European regions. Meanwhile, The Washington Post has also expanded its presence worldwide with its global newsletter ‘Today’s WorldView’, which focuses on important news and events worldwide and covers Europe, Asia, and US markets.

Related Read: Learn how The New York Times increased its subscribers’ base to over a million?