Automatad Team
"Social networks prove to be the major exception. They’ve made it relatively easy to target audiences at scale in an in-app environment.”
Share Tweet Share

Firefox Will Block Digitrust Universal ID in its Browser

We’ve discussed Mozilla’s Enhanced Tracking Prevention in our roundup a few months ago. At the time we wrote:

“Noticeably, it will let ads through but block any tracking attempts made by third-parties. Previously, the feature wasn’t active by default and the latest update changes it.”

Since then, Firefox with its 4% browser market share must have blocked several third-party trackers and cookies. But last week, Mozilla confirmed that the future versions of the browser will also block DigiTrust universal ID.

IAB acquired DigiTrust and accelerated its effort to create a shared identity for the adtech ecosystem. With the browsers blocking third-party cookies and privacy laws curbing trackers, IAB has to ensure anonymized user IDs are rolled out to help the industry run personalized ads. Several companies including MediaMath, OpenX, and LiveRamp are part of the non-profit entity, DigiTrust.

DigiTrust ID works similar to other identity solutions. It can be stored in a first-party cookie provided by the publishers and offer everyone else in the chain to use the same user id for buying and selling ad impressions.

Mozilla relied on a tracker list curated by Disconnect to power its Enhanced Tracking Prevention. And, John Wilander, an Apple WebKit engineer who works on Safari’s ITP filed a bug to Mozilla stating that the DigiTrust domain isn’t blocked even when the tracking prevention feature is enabled.

Mozilla requested the DigiTrust should be added to the Disconnect tracker list and it has been added and Mozilla confirmed that DigiTrust will be blocked in its upcoming release.

IAB’s SVP of Membership and Operations, Jordan Mitchell said this isn’t a surprise at all.

“We know certain companies take the position that there is no sufficient consumer value to justify ‘tracking’ — anonymous audience recognition — of any kind, not even for use in communicating privacy choices. They believe no third party can be trusted. We take a different position: that trust should be established directly between consumers and the brands, and publishers they trust, and with the third parties that those brands and publishers trust.”

Apple’s ITP that works based on machine learning (not blocklists) already blocks DigiTrust. In fact, other ID providers including The Trade Desk and LiveRamp are also blocked in both Safari’s ITP and Mozilla’s Enhanced Tracking Prevention. As the market share of Firefox is quite smaller than Chrome or Safari, the impact won’t be severe. But it still pushes us to come up with user IDs that aren’t solely based on cookies (think, LiveRamp Identity Link).

The year is about to end and we are here to highlight how big is the programmatic ad market really. Last week, eMarketer and Zenith reported some interesting numbers on programmatic and its challenges in general.

– According to eMarketer, US advertisers will spend more than $57 billion on programmatic display ads this year and more than half of the investment will be directed to social networks. 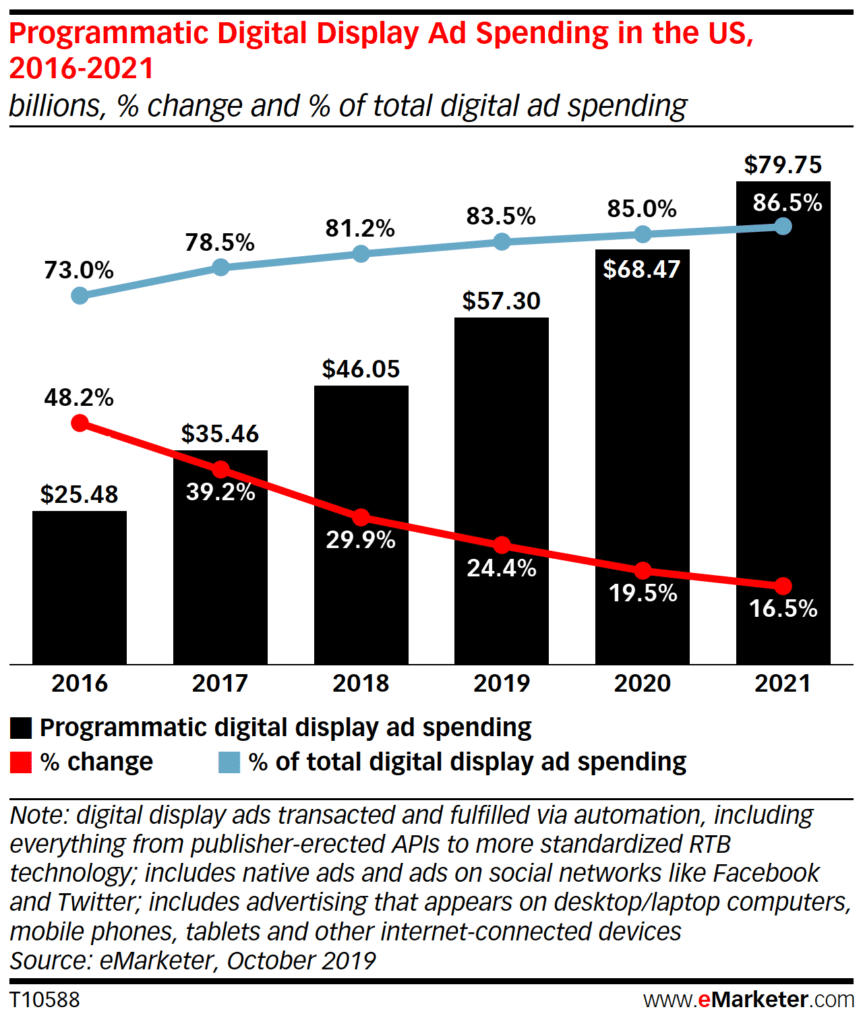 – Besides, programmatic will account for 83.5% of total digital display ad spending this year, as per eMarketer’s forecast.

– Social media will continue to attract more than 50 percent of the total programmatic ad dollars through 2021 as marketers are expected to prioritize social media ad formats, especially video in the upcoming years.

“Advertising in a cookie-free mobile app environment where users spend much of their digital time is complicated and difficult. Social networks prove to be the major exception. They’ve made it relatively easy to target audiences at scale in an in-app environment.”

In other words, the same reason that’s been helping walled gardens to scale in the last couple of years.

Zenith published it’s Programmatic Marketing Forecasts 2019 last week and it reiterated the fact that privacy and supply-chain challenges prevent programmatic (on the open web) from capturing a better share of the total digital advertising investment.

– For the first time, the total amount spent programmatically will exceed US$100bn and it will reach US$106bn by the end of this year, to be exact. By 2021, programmatic will attract US$147bn in spending.

“Although programmatic ad spend continues to grow at double-digit rates, it is being hindered as the industry struggles with privacy and supply-chain challenges. Once these challenges have been addressed, programmatic marketing has the potential to accelerate again during the next decade.”

Now the publishers and advertisers will be able to restrict the extent of data used for serving ads. In simple words, you can now choose whether Google should use personal data and deliver personalized ads to the users on your website. This service is being called Restricted Data Processing.

Enabling Restricted Data Processing doesn’t mean that you will automatically become CCPA compliant. Once data from a Google product has been shared with another product, it will be subject to the terms of the recipient product.

The ability to restrict data use will be available to publishers, advertisers, as well as other partners with the help of various Google products they use.

If you are using Google’s product or services to deliver ads on your website then use the service for CCPA compliance. It depends on the partners how they restrict the use of data. Some might want to do it across the California geography, others might want to do it only with users who have opted out.

The Trade Desk Partners With Prebid

The players of the Open Web have been continuously fighting the Facebook-Google duopoly in the ad industry.  In the attempts to gather more strength, many companies have joined hands together. The creation of Prebid was one such attempt where AppNexus and the Rubicon Project collaborated to fight Google to standardize programmatic monetization.

Recently, The Trade Desk, a big critic of the duopoly, and a prominent DSP in the open web have joined Prebid. The addition of a company worth $11 billion is expected to increase Prebid’s speed of expansion. The Trade Desk will also be useful for the union in having much tighter integration and standardization.

Prebid is already working on reducing the publishers’ reliance on ad servers (another duopoly dominated area). It is good that the consortium is growing stronger. Having a competition in the market will protect the industry from the harmful effects of a duopoly.

Next Post
How to Setup Google ...
0 Comments
Leave a Reply Cancel Reply