Automatad Team
“Providing buying platforms (DSPs) and intermediaries with transparency into the origins, paths, and legitimacy of ad inventory as it arrives on their front doors.”
Share Tweet Share

Agreed, viewability-based ad buys aren’t something new. vCPM has been here for a while and Google’s Active View (where bids are optimized based on viewability data) is up and running for years.

So, why are we talking about it in this week’s roundup?

Teads, a global video ad exchange announced that it will allow buyers to only pay for 100% viewable ad impressions. So, if a buyer sets a 100% viewability as a criterion, the publisher mayn’t be able to capture the bid, even with the right audience and contextually-relevant content.

The move makes sense for the exchange as the advertising leaders, especially Keith Weed, CMO of Unilever are pushing the ecosystem to adopt 100% ad viewability standards. In fact, MRC is conducting research to see whether it is possible to go with the standard.

Note that exchanges and adtech vendors allowing buyers to bid on viewable impressions (at least 50 percent pixel should be in-view for a second) is quite common, but the shift towards 100 percent ad viewability has just begun.

In this case, Teads partnered with Oracle’s Moat, to measure viewability across the sites. You know that our industry is competitive and exchanges have to compete to retain the buyers. If one offers a selling proposition, everyone (at least the major ones) will follow suit. So, it’s time for you to reconsider how you place and refresh ads on your site(s). We believe it’s better to be prepared – work on your ad viewability and don’t stop with 50% in-view threshold.

Weighing in on your readership

User experience plays a major role in the revenue you get out of every pageview. Whether you’re an ad-supported publisher or a subscription-based news outlet, you need to ensure that the users aren’t bouncing off of your site.

As per Digiday’s latest piece, several publishers including Business Insider, Axios, and The Athletic are implementing one-question surveys and polls to solicit feedback from their readers. The idea is to establish an NPS score so that they can direct both the editorial and business team towards the right path.

Grappling with the duopoly and the evolving adtech industry, it’s easy to lose sight of why you’ve started the digital publication. Publishers are compelled to focus more on business-side rather than studying the users.

While it is true that publishers measure time-on-page, session duration, etc. direct feedback could provide enormous value to the overall strategy.

“I think [this trend] makes sense with revenue, but you’re not just trying to attract drive-by traffic any more. Value is a proxy of if someone’s going to pay for it or not.”

But it’s not that simple to procure clear feedback and put it to use. Publishers who’ve been interviewed for this piece admit that it’s not wise to use NPS alone to make any important decisions.

Mic, mid-sized programmatic publishers started using a one-question survey back in 2015. Within the first few months, the publishers recognized that there’s a gap b/w how valuable a story is perceived by the team and how many pageviews/social share it won. Editorial time might be spending too much time pursuing the wrong story that its readers wouldn’t consider equally valuable.

So, the publisher pitched to develop a new aggregate metric which depicts the correlation b/w perceived value and the actual value by measuring pageviews, social shares, etc. Though the metric didn’t ship, you can see the significance of tracking various signals and soliciting direct feedback from the readers.

Want to know more about your readers and how your content performs? Start with simple one-question surveys. Niche media outlets can reap immediate benefit by creating a closed feedback loop within the company. Pro tip: you can directly measure how your ads are impacting the way readers consume content. This can help you improve viewability, CTR, relevance, and more.

Google, in the middle of last month, announced that Chrome will fix a loophole that enabled publishers to identify whether the user is browsing the site in incognito.

Publishers who have implemented metered paywall are going to be impacted by the change. Typically, publishers allow some free articles per month (for instance, The New York Times) to eventually convert one-off/casual readers to paying subscribers. 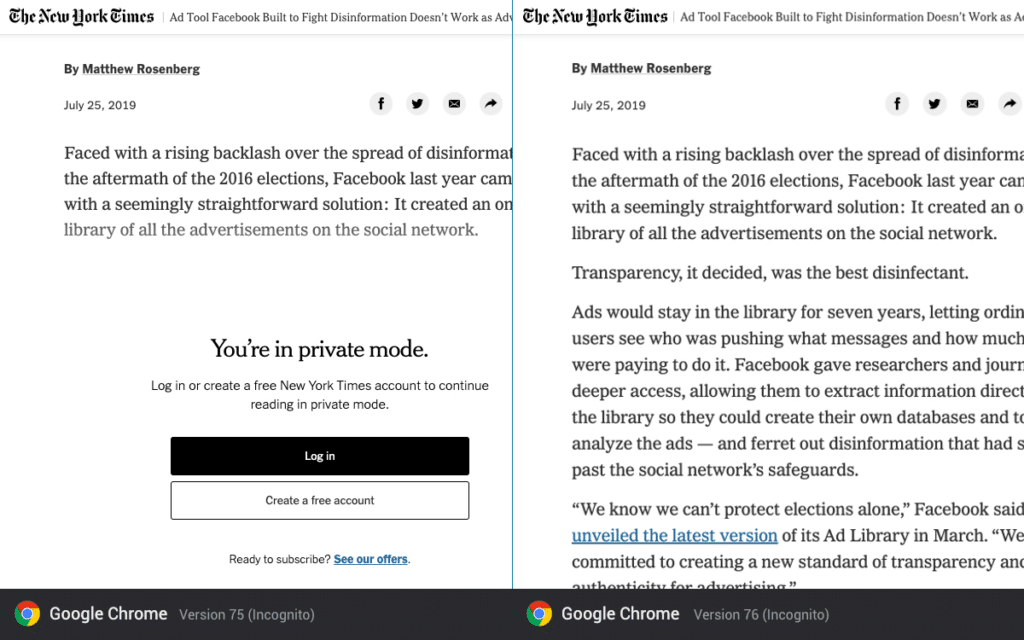 With the Chrome 76, you can essentially “reset” the free article count by switching to incognito mode. As there’s no way for publishers to identify whether the user is new or a returning one, they have no other choice than rendering the content completely.

33% of the news outlets use metered paywalls.

– Reuters Institute for the Study of Journalism.

If you’re a publisher who has been experimenting with a metered paywall, it’s time to either go with a free wall or hard paywall. That is, either you can ask users to register for free to read the article (whatever the mode is – normal or incognito) so that you can track the articles read and store it in your server to limit users or you can ask them to subscribe to read.

To be frank, Google explicitly mentioned that the future attempts to detect incognito mode will also be prevented. Besides, Chrome is the most-used browser across the devices. So, here are our suggestions.

– Start with freewalling the content. Gather data about your readers and learn what are they willing to pay for and how much they would at the start. Then, go with a hard paywall.

– Diversify your revenue. Invest in programmatic. Especially, with the first-party data in hand, you can get better revenues via PMPs.

Ad fraudsters usually get into the supply chain by posing as legitimate intermediaries. Last week, IAB Tech Lab announced that Sellers.json and SupplyChain Object (used to curb spoofers and fraudsters in the ecosystem) is ready for industry adoption.

“Providing buying platforms (DSPs) and intermediaries with transparency into the origins, paths, and legitimacy of ad inventory as it arrives on their front doors.”

We’ve experienced scenarios where publishers apportion their inventories to multiple vendors hoping that it will increase the yield. Most of the times, if not all, it isn’t worth the effort. With sellers.json in place, you need to assess carefully before partnering with a vendor.

– implement SPO. Apparently, buyers will track the supply chain to figure out the best route to get the desired impressions.

If you’re wondering, yes, demand-side platforms claim to perform SPO to constantly weed out the bad actors and subpar supply from the buying process. But, the specs will make it easier and advertisers don’t have to rely on any black-box algorithms ran by DSPs to cut down the vendors.

Assess the partners you work with and see how they’re adding value to your business. At the end of the day, if a buyer decides not to take a route, you’re losing out impressions even if the partners in place (or because of them). That being said, it’s important to optimize the setup considering the impact on revenue.

Vice Media in talks to acquire Refinery29 – The Drum.

A Future Bright and Cookieless – AdMonsters.

All Your Questions o...

Next Post
What is GAM Passback...
0 Comments
Leave a Reply Cancel Reply