Automatad Team
“The open market used to be scary, like the dark woods in “Stranger Things”. Now it’s more like well-lit woods with fewer trees and more viewability, so it’s easy to spot the bad people and easier to defend yourself against them.”
Share Tweet Share

This is our 68th roundup. While it is typical for us to discuss Axel Springer’s strategy, we tend to rule out apps. The reason is quite simple – most of our readers including you, are web publishers.

But in this roundup, we’ll talk about Upday, a news aggregation app by German digital publishing house, Axel Springer.

You’ll know why in a minute.

The publishing giant went against the walled gardens from the start. It realized that publishers need to stay independent – in order to thrive and compete against the duopoly. Upday is an attempt that’s slowly succeeding in the uphill battle.

Why it worked well?

Upday knows what it takes to direct agencies and brand marketers to spend more ad dollars on its platform. As of 2017, it partnered with 3,500+ websites and most importantly, drove 4 million visits a day to its publishers. If you look at it, Upday created a rare win-win-win situation for advertisers (scale), publishers (visits), and itself.

Once it gained steam, the platform focused more on quality. To increase the time spent within the platform, it learned more about its users’ interests. At first, readers were asked to pick the topics, now a reader is automatically suggested a topic based on the historical data.

“On top of the explicit choice of categories, we have the implicit ways of understanding what the user is interested in through user behavior because the algorithm is learning.”

On the other hand, it vetted the publishers and maintained a higher quality archive and brand-safe environment to woo advertisers. Besides, advertisers can make use of data collected including what is being read, how long users read a particular type of content to create audience segments.

If you are a regular reader, you know we’ve been suggesting this for a while. In fact, publishers have started to strategize the way they sell their inventories, a couple of years ago. Upday gets more than 80% of its revenue from open exchanges. If the advertisers want some sort of guarantee – min.viewability/CTR/reach, it pushes them down the funnel to ink a programmatic guaranteed or PMP deal.

We know a mid-sized web publisher can’t offer what Upday’s offering to advertisers. But it can surely figure out its way to top by scaling up the audience – with quality and first-party data.

How a mid-sized publisher sells programmatically?

We’ve seen the success story of an app with tens of millions of users, now let’s get down a bit.

Consequences of Sound, a mid-sized publisher with 4 million+ monthly unique visits (source: SimilarWeb) reveals how it grows its ad revenue in an interview with Sarah Sluis of AdExchanger. Here are a few interesting highlights.

On the open marketplace:

The publisher attracts well over 1500 advertisers who spend more than $100 a month via header bidding.

“The open market used to be scary, like the dark woods in “Stranger Things”. Now it’s more like well-lit woods with fewer trees and more viewability, so it’s easy to spot the bad people and easier to defend yourself against them.”

As per Consequence Media, open exchanges are the way to establish relationships with advertisers and eventually to know their KPIs and business goals. Especially, we like how Bilello put his perspective:“Being a detective is key”.

What he meant is to be proactive and figure out what advertisers like about the site so that you can offer more of the same in a PMP setup.

The publisher knows how important it is to deliver a better user experience. It implemented lazy loading and removed the resellers refreshing non-viewable ads (the viewability shot up to 75%).

Again, publishers should study their site and make the right decisions to grow their revenue and reach. However, refreshing only the viewable ads is essential and applies to all. We can help you set it up.

Preparing for the future

Third-party cookies are facing threats from all the browsers. From Safari to Mozilla to Chrome (the one which the industry primarily relies on to funnel/track), broswers are poised to block third-party cookies, at least partially. So, here’s some help.

Steps to help you sustain and grow:

– Force log-in for safari user. We know it is concerning for any publisher to enforce a log-in system. But it’s time for us to admit that Safari can’t generate much revenue, as far as we rely on third-party cookies. As Ciaran O’Kane of ExchangerWire puts it – “Safari is a lost cause for programmatic monetisation”.

– Contextual advertising wouldn’t be able to replace programmatic as you expect. While it is true that contextual advertising can support publishers, especially in the environments where tracking is not possible, it isn’t wise to go with it completely. Advertisers prefer to spend on platforms with scale and data, rather than on the open internet. So, start free-walling content (put a paywall to know more about your users).

This, in turn, can help you tailor content and ads.

– Double down on user experience. No matter what you do, you can’t expect to grow unless you provide a convincing experience for the users. As brands are moving towards qCPM, it is time for you to think about the long-term goals.

– DMP. We have a huge guide on how to evaluate a DMP. We don’t advise everyone to spend on DMP, but if you have scale and varied audience segments, it is worth to invest and create segments so that you can woo advertisers to partner with you directly via a PMP deal.

Charts of the week

We typically limit our roundups with one or two charts. But last week has been different. So, bear with us. That being said, all of them are invaluable and should be considered in your next quarterly plans/weekly meetings.

Are you CCPA ready?

Well, before answering the question, know what other US companies say. International Association of Privacy Professionals (IAPP) and OneTrust conducted a poll and found that 55% of US privacy professional plan to make their companiesCCPA-compliant before 2020. 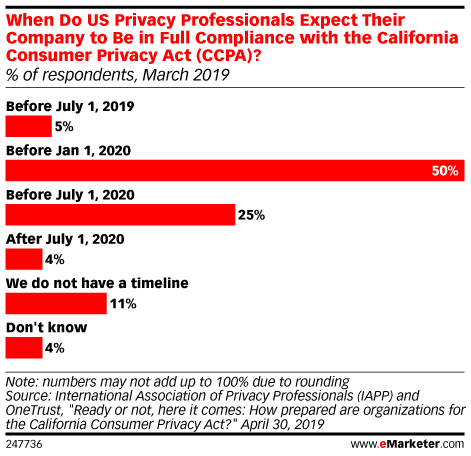 As expected, GDPR heightened awareness around data. Interestingly, 24% of the responders said that it also increased irritation because of opt-in steps. Talk to your users and then, implement your CMP optimally. 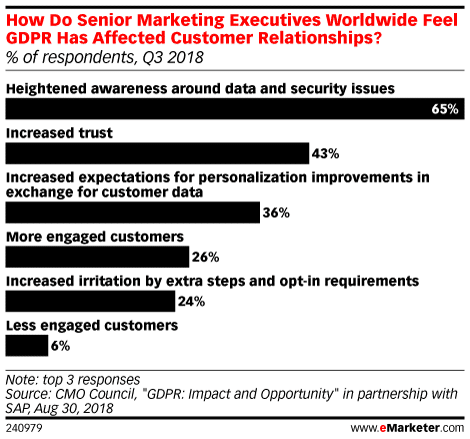 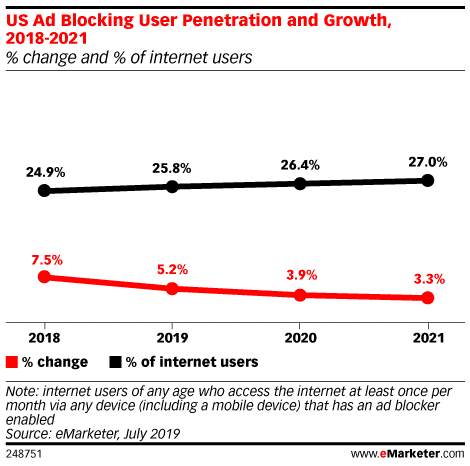 Q2 earning from the walled gardens are in. See for yourself.

Dstillery Shuts Down DSP And Becomes A Data Company  (An Interesting Pivot) – AdExchanger.

The Trade Desk Stock Jumps on Partnership With Amazon (Amazon Opens Up to the Open Internet) – The Motley Fool.

‘Shouldn’t this all be automated?’ Overheard at the Digiday Publishing Product Leaders Retreat – Digiday.