There’s a growing problem that disturbs most of the mid-sized publishers in the adtech. No, it’s not the duopoly or declining ad revenue. It’s how ad agencies are pushing down the publishers, eating their margins and eventually, driving them off the track.

You may not work with ad agencies, but they’re the ultimate ad buyers. It’s essential to know what’s on their mind.

Last week, Digiday talked to a couple of ad agencies to see what they think about the issue. We picked the best arguments and listed them here.

“We have a market that penalizes long-term relationships. If I have been working with a publisher year after year, you’d think they could raise prices. If I’m working with a client for years, I should be able to charge more. But I have to give a better deal to those clients. Basically, we grind down the publishers.”

It holds true, at least for mid-sized publishers. Even when you try to build a long-term relationship with an agency hoping to reap big deals in the long run, you’ll end up knowing that the margins are becoming thin.

If you’ve been here for a while, you know that we endorse pacts formed by publishers. Leaving aside whether it’ll help to chip away the market from duopoly, publishers will surely have the leverage to demand higher prices and better deals.

Eg: TrustX – Programmatic, premium, and win-win for both parties.

“As a publisher, if you can’t clearly answer why your content is needed in the world, or explain why your distribution is sustainable or your advertising offering is really truly valuable and not easily replaceable, you are likely going to struggle.”

This is a no-brainer yet everyone fails to see the significance it could have on the bottom line. If you can’t explain why your content is required and what purpose does it serve, you’re trying to be everything to everyone – It’s a big issue (refer the next section)

It’s double-sided. Agencies are continually facing nags from advertisers and they can do two things – Decreasing their fees and Eating the publisher’s margins. Most often not, they do both. As a publisher, you should hold your ground and avoid making any “unhealthy choices” to ensure your business sustainability.

How A Well-Known Publisher Went Broke?

Mic was one of the fast-growing publishers breaking news, covering opinions, arts, and a lot more for millennials and they succeeded at one thing everyone wants to succeed at – Building the right audience.

But there was something wrong. They build their audience on Facebook (3.4 M). That being said, Facebook isn’t the only reason the publisher failed to address. It was on a merry chase of capitalizing on the next big thing in the online publishing industry.

Let us break down how Mic lost its readership and revenue.

Back in 2014, everyone wanted to get the audience from the huge network available. The idea was clear. Get to Facebook, post relevant and content that resonates with the target audience and finally, drive them back to our own platform.

But if you live by the sword you die by the sword. @Facebook drove our ascent, when they started to prioritize outside links and later video, and also our decline, when they changed their feed algorithms, and cancelled our show. Both happened at very inopportune times.

Well, Facebook had its own plans and almost diminished referral traffic, deprioritized page content, and released IA. Long story short, Facebook pushed the publishers out of its system. After all, it’s not Google to rely on publishers to provide content. 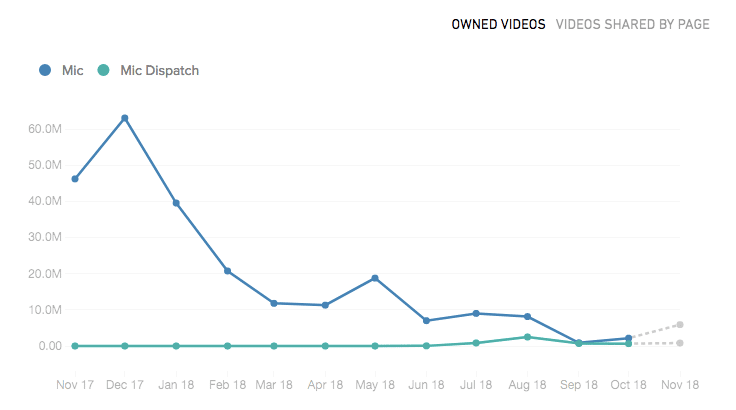 Speaking of Google, publishers realized SEO is one of the best ways to get traffic every day and unlike Facebook, older content won’t be plunged.

The team at Mic built a 20-member SEO team and made moves to get the SEO right. It paid off well. However, when it saw the opportunity to be more with video journalism, it pivoted again.

Soon after attempting to be the best video content provider, it yet again failed as Facebook plummeted the reach of short-form videos in favor of long-form content. The biggest mistake? Publisher inked the partnership to create shows for Facebook Watch and Facebook dropped it as the reach wasn’t enough.

Mic, once worth hundreds of millions, sold to Bustle for just $5 million.

At the start of every year, it is apparent that the marketers will dust off their old strategies, study the results and create the new ones with of hope of increasing ROI. So, we’ll try to cover what marketers are up to by curating data from various resources, over the month.

There’s no need for us to emphasize the impact of data on advertising. Marketers realized it and are already utilizing data in different ways.

From a survey conducted by Digiday, almost 30 percent said improving data quality is a key priority in 2019. They’re in fact right. We explained how the Financial Times segregated and valued the data to become what they are today.

They combined first-party data with DMP to do more and earned premium CPMs for non-premium ad placements.

Brand Safety has always been on the headlines. Recently, with the rise of ad fraudsters and spoofers, advertisers are now trying to avoid the most vulnerable places – News Content.

Of course, quality journalism wins. But considering the proliferation of low-quality sites and fake news, advertisers are getting concerned and this time their action is to steer the ship away.

Data To Drive Your Strategies

A few months ago, we came across a pattern that is similar to Supply Path Optimization (SPO) and we called it ‘DPO’ (demand path optimization). Last time, we predicted that the marketers will eventually try to cut down the vendors they work with. 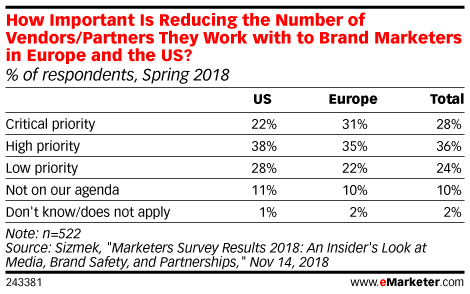 A research by Sizmek from eMarketer says that it has become the top priority for buy-side in 2019.

Part of online advertising is to deal with intrusive and abusive ads. And, Google, with the release of Chrome 71 propels to help visitors block abusive ads. Google considers the following as abusive and will block the ads if the feature is enabled.

Fake messages, unexpected click areas, misleading site behavior, phishing, auto-redirects, mouse pointers, and malware. If you’re wondering why we say this to you, as you’ll never run abusive ads, take a look below.

Besides, Google has the habit of misidentifying abusive elements with proper elements sometimes. Stay away from the red zone. Just make sure you partner with the right vendors and deliver a clean user experience.

Multimillion-Dollar Oops! Google Will Pay Publishers For ‘The Night Of The Yellow Ad’ by Sarah Sluis at AdExchanger.