Were We Doing It Wrong All Along?

Here’s a problem with technologies we use in Adtech: They have multiplied their abilities and extended what they could do over the years. Why is it a problem?

Well, if you’ve been skimming our weekly roundups, we, on more than one occasions, referred how the lines between the SSPs, DSPs, Ad Exchanges, and Ad Networks are becoming blurred. Especially, as the battle against the duopoly continues to intensify, ad tech vendors found it’s better to take whatever they could.

This means, it’s hard for us to comply any industry-wide law and yes, we’re referring to GDPR. That being said, we’ve been able to figure out a way to get consent from the users (using Consent Management Platform) and pass it along the adtech chain (DaisyBit).

CNIL and A French Adtech Company

The filing insisted that the company should obtain valid consent to continue processing the (geo-location) data of app users and the CNIL pointed out why the consent obtained by the company isn’t valid.

– Language. The terms used in the consent tool is complex and unclear.

– Not Specific. The consent collect at the time of installation of the app isn’t specific enough and only had the binary option – Agree/Refuse.

– Pre-checked. Though the tool offered a UI to customize (select/reject) the vendors, the options were pre-checked and hence, it’s not affirmative.

Why we should care?

Post-GDPR, most in the adtech are either using IAB registered CMPs which are based on IAB’s Transparency and Consent Framework (TCF) or relying on TCF to build their own. Vectaury falls on the latter. They’ve built their CMP tool from the IAB’s framework.

As obvious as it seems, IAB’s consent framework was questioned by this filing and the Bureau replied too. IAB Europe said the company also failed to meet TCF’s basic criteria and will be on review. In addition, some of the complaints like complex terms, UI, etc. are subjected to change and will be improved for the betterment of the users and the industry. It’s advisable to check your CMPs and make sure you’re properly following the GDPR.

Adtech consolidation is real and the M&As are the talk of the town lately. It is true that the consolidation drives convenience and both marketers and sellers can theoretically stay on a single platform to do them all. In fact, from Google to Amazon, everyone’s merging what they have to offer a unified solution.

We know it’s not appropriate to draw an analogy between Google/Amazon platform consolidation and adtech M&As. Without a doubt, M&As are much harder. However, when you boil down why adtech consolidation (of vendors) happens in the first place, you could see a promising reason: Market demand/Potential. If there’s a demand, M&As will most likely to succeed.

But, when it comes to publisher M&As, there are a lot more involved (think declining growth, capital requirement, expansion, etc.)

So, do publisher M&As actually work?

A recent piece from Digiday argued that it isn’t worth it. Considering the possibilities of Management issues, contrariness in work culture, goals, etc, publishers are better off on their own.

“They will just slow their demise, and not generate any new cash flow. What they need to do is to rethink their business models on what Facebook and Google can’t do.”

It works, but not all the time

Apparently, we all have to agree that the business models in the industry need a makeover, but we believe M&As could work. For instance, when Axel Springer took 88% stake in Business Insider, observers criticized the move by saying that the legacy publisher overpaid. But later, it was made apparent that the acquisition will pay off.

What works better than M&A?

Pact – Publishers don’t need to merge to save their audience and chip away the digital ad dollars from the duopoly. A strong and shared marketplace can always work and TrustX, The Ozone Project, etc. are some of the most recent examples.

Despite GDPR and average ad viewability rate, European publishers are seeing a consistent growth in their ad revenues and will continue to stay on the winning track as the revenue is expected to rise a quarter.

A recent research conducted by the Oath and IAB Europe revealed the aforementioned prediction along with a few other interesting numbers.

Let’s cover it up quickly.

70 Percent: Just over 70 percent of the surveyed 171 IAB Publishers said that video content will be their top priority for the next business year.

60 Percent: Around 60 percent of the publishers believe that video and native ads are keys to their success.

30 Percent: Surveyed publishers from the UK said that their video and mobile ad revenues will grow by 30 percent.

40 percent: Of all, 40 percent are concerned about the monetizing audience growth as the content is viewed on many platforms.

⅔: Assessing and giving value to each impression remains one of the biggest challenges for two-thirds of the publishers.

60 Percent: 60 percent of UK publishers said that programmatic gave them a competitive advantage and 61 percent said the programmatic software is “extremely important”.

The survey confirms that video and programmatic will continue to drive revenues up for publishers. You just need to implement them in an optimal way.

We told you, breaking the duopoly is hard. Even for a giant like Amazon. While Amazon certainly improved its ad business and consistently reflected the advertisers’ feedback, there’s a lot of work needs to be done.

Consolidating all of its ad platforms is a productive move and we have no second thought in it. But there’s half undone. Amazon should make its platform self-servable, to attract SMEs and newer startups into its advertising circle. Retail giants can hire special teams (in-house) as they did for Google Ads to manage Amazon advertising.

If you think that the scandals and measurement errors are going to change the way advertisers look at Facebook, you might need to clear it off your memory. A recent Digiday survey said that the scandals aren’t going to make any material impact on their Facebook ad budget. As long as they see returns, they’ll continue to advertise. 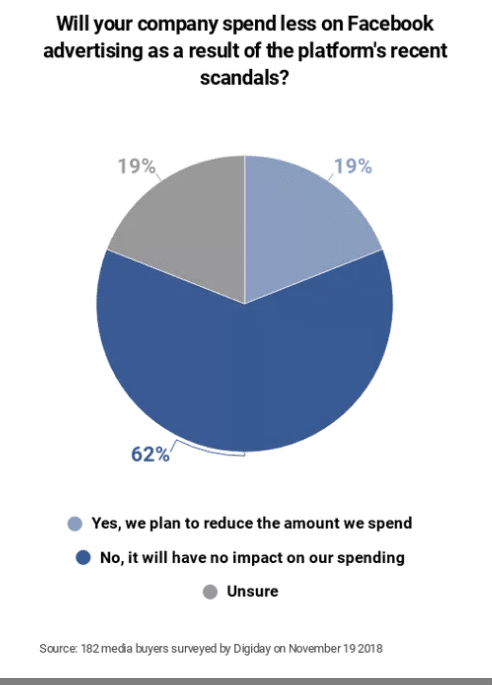 Another research published by eMarketer says that advertisers are more or less satisfied with the current metrics and ROI from the advertising. Be it Facebook or Google, they see what they pour in and what they reap out of each platform. And, to be frank, they’re happy with it. The inertia prevents them from rethinking their advertising approach.

We believe the more you dug, the better you’re at your job. Before you make any major decisions, prepare to change/improve every day. After all, they’ve taken 2 decades to do it right.