We know there’s no need for us to refresh bid caching and its impact on the practitioner (Index Exchange). However, we can’t let go of the story yet.

Last week, Digiday published a piece saying that ‘bid caching’ is a “symptom” of adtech commoditization.

It is a fact that adtech vendors are struggling to stand out from the crowd as everyone literally has the same core technology and offers more or less similar product features. Besides, the growth of header bidding and open-source wrappers have further blurred the line between independent SSPs.

DSPs and Ad Exchanges can also lose their market share with commoditization. In order to stay strong, ad tech vendors have started to tweak the auction dynamics. The worst part is, they can’t be open about it. As you have guessed, a rival can imitate the features in no time.

The problem might be severe in the near future as there will be more tech vendors offering the same solutions. So, how can we end the issue? Our bet is on,

Supply Path Optimization – It is not a brand new approach. In fact, third parties have even started offering supply path optimization as a service like viewability. And, we firmly believe authentic adtech vendors will have their place in the supply chain [after the cleanup], not just because of the technology, but because of the expertise of the team. Product features can be the same, but not the experiences.

Ad tech Consolidation – We all love to avoid extra work as much as we can. And, publishers would kill to avoid any extra work. So, adtech vendors who can offer self-serve, all-in-one solutions for the sell-side can hold their ground.

In the adtech, publishers were held responsible for many problems in the supply chain. This includes brand safety and data protection. We agree that publishers need to embrace certain strategies to ensure the protection of consumer data and maintain a brand-safe environment. However, it isn’t the responsibility of the publishers alone. We all are in the equation.

Last week, we were able to get our hands on two interesting charts backing our statement.

1. GDPR has been quite a topic in the adtech industry. And, as you know, ‘data protection’ covers a significant part of the law with ‘19 articles’ talking about how the consumer data should be processed and protected.

Oath recently conducted a survey to find out who advertisers believe should protect consumer data.

43% said those who manage and collect data including publishers and adtech vendors should be responsible for data protection.

2. Sizmek, a buy-side technology vendor conducted a similar survey to know who’s responsible for brand safety. The survey included 522 advertising decision-makers from the US and Europe. Do you know what’s surprising about the results?

38% of brand advertisers and marketers believe brands [they themselves] are responsible for brand safety. 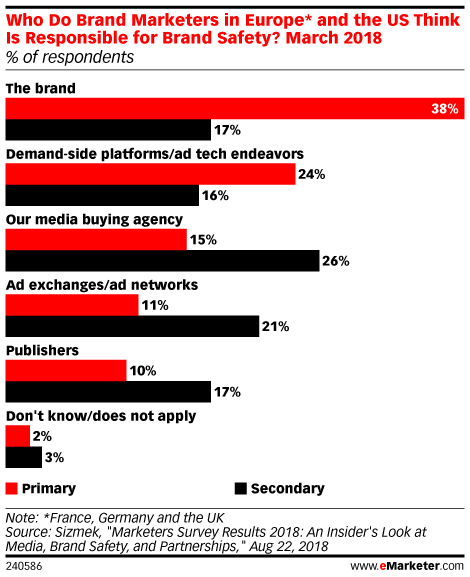 Takeaway: Publishers aren’t the only one who’s responsible for the disparities and inefficiencies in the supply chain. But, publishers can do something about it.

The Guardian can be cited here as an example. In 2016, The Guardian ran an investigation on its own programmatically traded inventory and found that only 30 pence of every pound an advertiser spent is reaching the company. The rest is wiped off by the ad tech fees and taxes.

With the goal of putting an end to the inefficient selling process, The Guardian mapped out its supply chain with the help of its customers. This, in turn, enabled the publisher to develop a standardized process (with reduced supply-side data vendors, high transparency) that helps buyers to ensure 95 percent of the media budget is reaching the publisher from the DSPs.

Amazon’s Attribution tool to accelerate the battle against the duopoly

Amazon is serious about its ad business. The company has developed an API for AAP (Amazon Advertising Platform), grown its agency into hundreds of employees, and testing its attribution tool to prove Amazon ads worth (in terms of ROI) more than the ones offered by the duopoly.

Earlier this year, Amazon started testing an attribution tool with at least two agencies to test whether ads on its sites are more effective than the rivals.

“Brands will see how much better their Amazon product detail pages convert compared to their own site. From an ROI perspective, they’ll be hard-pressed to justify driving traffic elsewhere as a result”

Now, it is gaining some support from the Adtech industry. One of the advertisers of Amazon Ads Pernod Ricard says it will spend more on Amazon ads as it plans to enlarge its growing eCommerce business. The attribution tool seems to be worthy.

In addition, we see two more reasons to prove the attribution tool will help Amazon compete better against the duopoly.

Facebook’s new tool to boost publishers reach on the platform

Facebook, a frenemy to the publishers has a long list of presents and amends. Now, a new content testing tool is on the fore. As per the source, Facebook is testing a tool with five publishers including BuzzFeed to help the publishers improve organic reach on the platform.

As we all know, Facebook changed its algorithm which diminished the presence of publisher content and posts on the news feed. Many publishers have suffered a drop in their ad revenue as the referral traffic from Facebook almost died. The move has angered the publishers and also helped them develop an independent mindset.

But, Facebook isn’t letting go of publishers. It has been developing partnerships and strategies to gain the trust of the publishers.

The tool will let publishers test the effectiveness of a link post [other formats are not yet developed] by showing them the predictions of metrics like click-through rate, interaction, etc. in real-time. A publisher can test up to four variants of a post (with different headlines, excerpts, and images) and see the predicted metrics before posting.

This will save some bucks as otherwise, publishers will have to boost a post to see the interaction.

It’s not exactly a game-changer

Fran Berkman, deputy director of news curation for BuzzFeed News, said that the tool has been used for validation purposes. The team is able to validate the optimization ideas before posting and the results aren’t impressive yet. Anyhow, Facebook itself said it is too soon to share the results.

Takeaway: We believe independence should be embraced and endorsed. Depending on a platform is agreeable only up to a certain extent. As a publisher, you can’t cut off a network like Facebook from your content marketing strategy. So, start experimenting and growing your audience on Facebook. But, don’t leave them on Facebook.