Ad Spending in the US

As per an analysis conducted through the collaboration of Standard Media Index and MediaPost, the ad market has completely recovered from the recession it experienced in 2020-21. The analysis was conducted from a pool of actual media buys of independent agencies and agency holding companies to index the total US ad spending. The ad spending for the full calendar year has risen by 18% from 2020, and 9% from 2019. 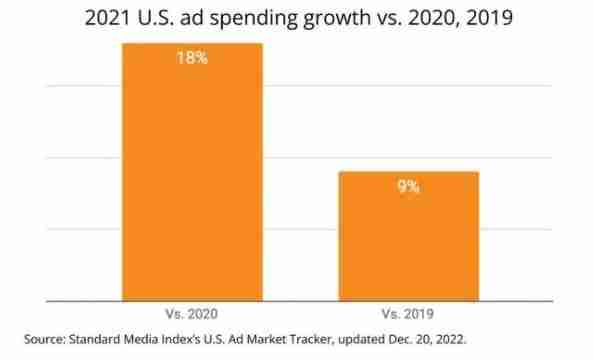 Despite the robust recovery, it hasn’t been uniform across major media. Digital media experienced double-digit growth throughout 2021, while TV, OOH, radio, and print media experienced a comparatively erratic growth.

Ad Market Expansion in the US

The US ad market, despite increasing ad spending, expanded unevenly. It can further be elaborated through the decelerated rate of expansion the industry experienced when compared to recent months. The rate of increase for total ad spending for December 2021 vs. December 2020 was only 1.4%.

While this expansion was the biggest in volume (8.4% increase from December 2019), a closer analysis shows that this expansion is quite uneven amongst various ad categories. Most of the growth has come from niche categories. 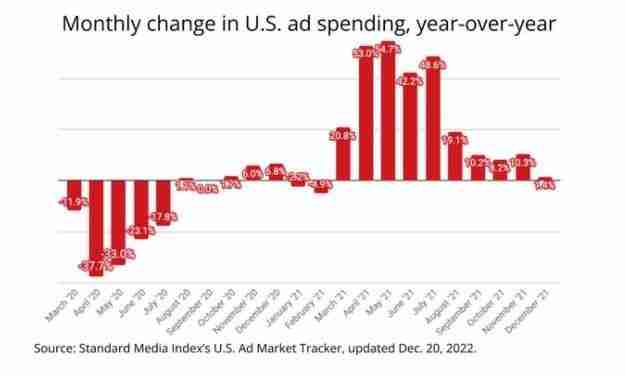 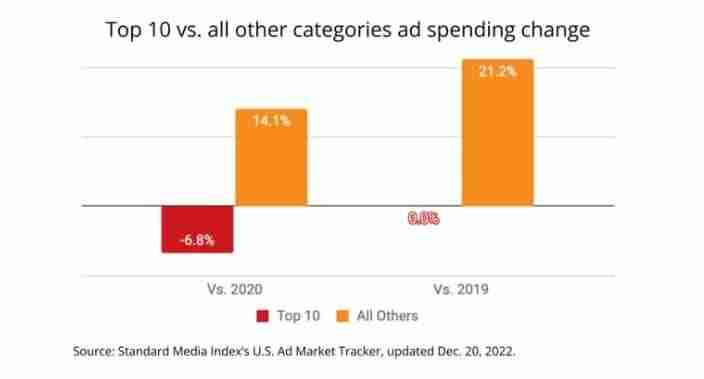 While most publishers were establishing a first-party data strategy in 2020, Insider already had a product in place. They launched Saga, a first-party data platform that does not use email addresses, in February 2020. They had already been testing Saga secretly with select advertisers for almost a year. 2021 mostly saw Insider trying to popularize Saga with advertisers.

“We went from millions to tens of millions [in revenue],”

Currently, different parts of the organization are using Saga for myriad initiatives. This includes an audience extension project focused on driving subscriptions. 2022 will see more of such usage, with Insider using Saga data for their internal goals and popularizing it with agencies and advertising clients. The most popular Saga products that buyers used include Saga Surround and Insider Extend.

After revamping its digital business in 2019, Newsweek, an American news publisher, successfully increased its readership to above 100 million unique visitors per month, as well as its digital ad revenues by 166%. The implementation of an objectives and key results (OKR) framework is pivotal to this success. The publisher introduced the OKR framework for ad revenue in Q4 of 2020 with a goal marker set at 50% of total ad revenue compared to Q4 of 2019. The goals were exceeded prompting more ambitious targets for 2021. The framework also improved Newsweek’s programmatic ad business and allowed them to evaluate and address weaknesses in various traffic sources.

“A small optimization of 2x, 3x or 4x, when you’re dealing with large volumes, can be monumental”

The success of the OKR framework prompted the publisher to pursue a partnership with Google Cloud and further refine its approaches. The results were the introduction of a Journalism Impact Index and Google Cloud’s Recommendation AI. The latter was adopted to suit Newsweek’s use case and allow them to identify deeply engaged new audiences, provide the users with tailored content recommendations, and finally pitch a subscription.

Formerly known as Demand Media, Leaf Group has worked really hard since 2016 to change its perception as an SEO-focused content farm and become a commerce-driven media company. They were acquired by Graham Holdings in June 2021 for $323 million. The commerce side of the business was expanded as Leaf Group acquired Satchi Art in 2014, and Society6 in 2013. Currently, two-thirds of the company’s overall revenue can be attributed to its commerce business, while one-third results from digital advertising.

Prioritizing eCommerce has enabled the publisher to understand its audiences deeply and use that knowledge to provide the team with integrated commerce through the expert-led content that it creates. Being a publisher primarily, Leaf Group believes that seamless integration of commerce with content is key to continued success.

“You want to make sure that you’re offering your readership products that they would be interested in, products that you know are of high quality, and if it’s done by way of third-party integration, [then it’s] from a partner who can execute well so that customer has a great experience.”

The Graham Holdings acquisition has further allowed Leaf Group to take advantage of the holding company’s expertise, support, long-term business approach, and abundant knowledge about customer acquisition and retention. The publisher has also prioritized the creation of fewer, yet authoritative and relevant content. This is to rank higher in Google’s SERPs and tackle Google’s search algorithm changes.

A group of Democrats has proposed the ‘Banning Surveillance Advertising Act (BSAA)’ that prohibits advertisers and other companies from practicing personalized or targeted ads. Summed up as surveillance-based advertising, the practice of hoarding personal data to promote ad targeting and user engagement is ruining the internet.

The bill also forbids advertisers from targeting ads using any information or protected user information that they might have purchased. Targeting that uses attributes like religion, gender, and race is also prohibited. The only exception from this act includes broad-location targeting and contextual targeting. While many, including the Anti-Defamation League, Electronic Privacy Information Center, DuckDuckGo, Proton, and others have supported this bill, the ad industry has unsurprisingly revealed their distaste for such an act.

“This terrible bill would disenfranchise businesses that advertise on the Internet,”

This Act comes only a few days after European lawmakers voted in support of amendments to the Digital Services Act (DSA), which would largely restrict behavioral advertising. While a federal privacy law seems unlikely this year, the BSAA is a huge step towards the establishment of national privacy law in the coming years and the banning of surveillance-based advertising.

According to a resource, Apple released their iPad OS 15, iOS 15, and Safari 15 back in September 2021, and has since violated privacy policies by leaking browsing activity and user identities in real-time owing to a bug. This bug results from the breach of the same-origin policy, a foundational security mechanism that prohibits scripts, content, or documents of one origin from interacting with resources belonging to another origin. Origin refers to the port of a particular app or webpage, domain name, and protocol.

As per research released by FingerpringJS last week, this leak is the result of how IndexedDB, a programming interface most browsers use, is being implemented by the Webkit browser engine of iPadOS 15, iOS 15, and Safari 15. Owing to this bug malicious websites or attackers can trigger an IdexedDB-based leak by simply using an embedded pop-up or iframe within its HTML to open another website. This essentially means that the login credentials and browsing activity of a user on a trusted website can be accessed by bad players if a malicious site is open in another tab or browser window.

Martin Bajanik, a software engineer at FingerpringJS had notified Apple of this vulnerability back in November. However, no response to his emails regarding the potential release of a patch has yet been sent. The problem remains pertinent until Apple releases a fix for the Webkit bug.