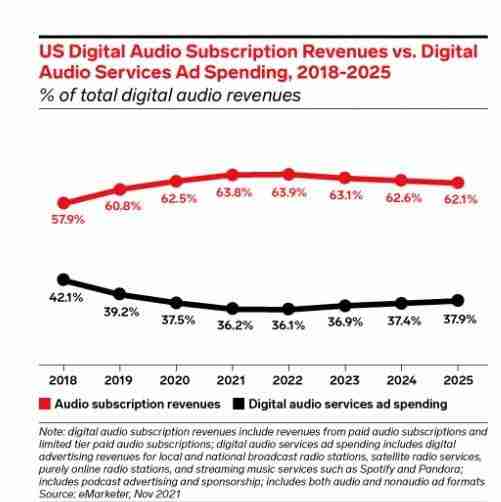 Revenues from US audio subscriptions should remain stable between 2022-2025, but rampant competition in the category is expected. Spotify remains the major player in the field, but Amazon, Apple, and Google are also trying to make their mark.

Ad industry expected to hit the $1 trillion mark by 2025

This year the ad industry grew at a faster rate than has ever been recorded in recent history. A major part of this growth can be attributed to digital advertising, which accounted for 64.4% of total global advertising in 2021. As per updated forecasts by GroupM, the global advertising growth rate in 2021 marked a historical year-over-year growth standing at a whopping 22.5%.

$766 billion is the current standing of the global ad industry, which is expected to reach $1 trillion by 2025. 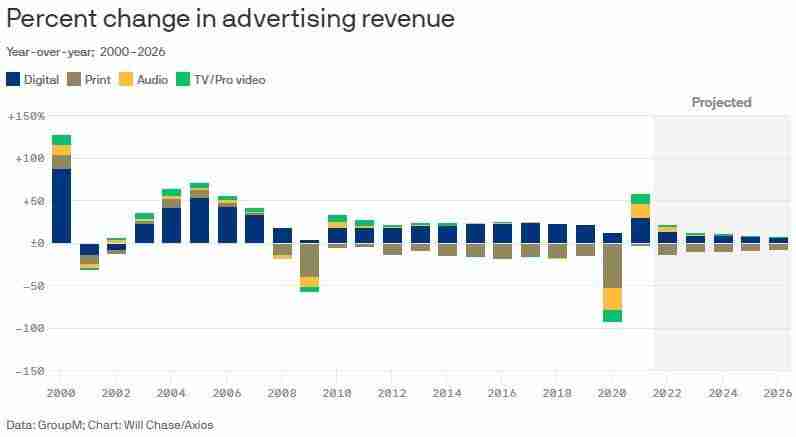 This massive growth can be attributed to numerous opportunities being discovered in light of the coronavirus pandemic. These include small businesses going online, eCommerce being widely adopted, and platforms like Amazon attracting increased ad spending.

While global ad spending grew in 2021, the growth was disproportionate amongst the leading markets of the world. China, the U.K, and the U.S accounted for 70% growth in the ad sector. Yet, they only shared 60% of the global ad spend. China, however, invested extra into digital advertising in 2021 to reach overseas markets. Growth was most prominent in countries that tackled COVID vaccination most effectively and efficiently.

80-90% of total global digital ad spend outside of China, however, belonged to three distinct companies. These were Amazon, Meta, and Alphabet, which grew at historically fast rates themselves.

A recent Digiday podcast featured Roy Schwartz, president, and co-founder of Axios shared insights into the internal growth of the company. Here’s what we learned from it:

Tomorrow, the New York Times is slated to privately launch the beta version of their new audio app, “New York Times Audio”, in the form of an iPhone app. The app aims to allow The Times to experiment with new audio journalism features. It also aims to create a unique app to build a direct relationship with its users, instead of relying on platforms like Spotify or Apple for the distribution of their podcasts.

The app also aims to reinvent how discovery tools work on audio apps. While most apps rely on recency, the design for this new app would enable users to pull relevant audio products from The Times’ staggering archive, resurfacing them based on situational relevance. This bespoke discovery tool contains three sections:

The app will not feature any ads on its display but will include an ad experience in its podcasts like any other platform. For now, the app remains outside the paywall system. However, it could be promoted as part of The Times’ subscription bundle in the future.

Industry Dive, a modern B2B digital media business that does not believe in paywalls and aims to keep journalism at the forefront, is on its way to making $100M in revenues in the coming year. This 340 employees strong company has already made $85M in revenue this year and aims to reach the aforementioned goal by next year. Their EBITDA margins for the year were over 25%. The secret to their success includes:

Google and Facebook were sued by more than 200 newspaper publishers

Google and Facebook have been sued by a group of 30 companies that own more than 200 local newspapers in a consolidated antitrust lawsuit. The lawsuit claims that these tech giants have monopolized the digital ad market, accruing revenues that should otherwise go to these local newspapers.

While the Charleston Gazette-Mail, a local West Virginia newspaper was the first to file this lawsuit, many others have filed similar lawsuits since then. A coalition of lawyers, who are funded by contingencies at the moment, aim to help these local newspapers by:

Google has previously been sued in 2020 by The Justice Department, while Facebook faces a similar charge filed by state attorneys general and the FTC. The unredacted complaint which includes internal documents from Google alleged how Google’s AMP pages generate 40% less revenue for publishers, how Google charges exorbitant fees owing to their staggering market share, and how they colluded with Facebook to influence header bidding auctions amongst other anti-competitive practices.

The courts have myriad options to try these cases. Some could be selected as bellwethers, testing all the cases for each individual claim, or these suits could be sent back to their originating states to be tried.

Digiday recently highlighted how most websites aren’t complying with GDPR even three years after its release. It says, 92.6% of the premium sites place at least one tracker in the browser before the visitor accepts cookies. Of the 200,000 analyzed cookies, half of them were marketing-related, and 82% of them were from third parties. 32% of such cookies didn’t wait for consent. 70% of the marketing-related cookies sent the user data outside the EU. In a nutshell, most top publishers aren’t compliant with GDPR.

The findings came from a study by UserCentric, a CMP, and Ebiquity, a media consultation company. It’s concerning because GDPR violations can land publishers in legal trouble. Also, advertisers want their partners to be responsible and trustworthy. Every publisher should ensure compliance with privacy laws to avoid legal issues and business-related hurdles. We suggest you conduct periodic audits for privacy compliance.

Google announced Manifest V3 in June 2019. It is a set of new technical guidelines for Chrome extension developers. Google says that the purpose of these new specs is to provide a safe and secure browsing experience to the user. Preventing extensions from stealing data is one of the main focal points.

Last week, the Electronic Frontier Foundation published its opinion about the initiative. Here’s what it says: