NFL and other sports-related topics are becoming the new favorites of the US audience. Last year, political content created most of the buzz on news sites. Taboola’s research on 1400 news sites shows NFL, football, and ESPN were among the top 10 topics of interest during the last month. On the other hand, 18 of the top 20 stories were related to politics during October 2020. Coronavirus is consistently the no.1 news topic in the US, but the interest is slowly falling among the audience. 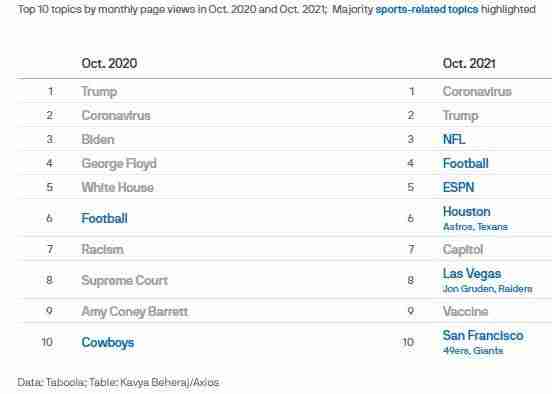 So, publishers of political content can expect a decline in traffic, whereas sports publishers can witness an increment.

Digiday has analyzed the earnings of four media companies to highlight the changing landscape of online publishing. Here’s what you should know:

The trends show that there’s still a lot of potential in the subscription business for publishers. Ads and subscriptions can exist and grow together. The NYT even has subscriptions for its crosswords and cooking app, etc. So, subscriptions aren’t limited to editorial content only. You should keep exploring such opportunities.

The Boston Globe started promoting its subscription at $1 for six months at the beginning of the pandemic. Most of the publishers were doing the same as there was a high appetite for subscriptions among readers. But, as the promo ended, the publisher moved to its regular pricing, and people started to cancel their subscriptions. The publisher was expecting the dip, and it continued till January before reaching stability.

“I would say if you are not on the analytics team, it could be a little disorienting for people to see like: whoa, what are these big dips? But really, it was pretty much expected just because of the way we grew and how we grew so quickly.”

Ultimately, the revenue from retained users started making up for the lost introductory subscriptions. This year, the publisher expects the revenue to grow by 30%. Interestingly, the publisher found that the retention period of subscribers is the same in the long term, no matter if they were acquired via promotions or not. 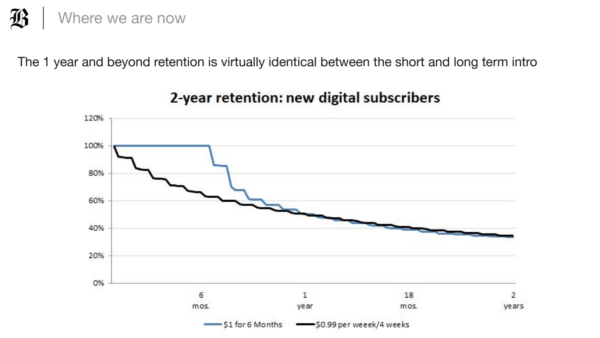 The Globe’s a dollar per day subscription plan is costlier than its rivals. For instance, the NYT costs around 60 cents a day. Despite the high price, people are paying for the Globe because it provides a unique value to the user:

“You can obviously subscribe to the New York Times or somewhere else for more of a national perspective. But they don’t have the depth and breadth of what we do in our region, which I think is why we have a very sophisticated regional reader and subscriber base. And they’ve agreed with us in the sense that they’ve been willing to pay a premium price.

In conclusion, we can say that your user acquisition strategy can play a vital role in the success of your business. Also, you can command a premium price if you can deliver value to your readers.

Group Nine Has A New Source Of Revenue

Group Nine has created a new source of revenue with branded product boxes. It curates brand-sponsored items and sends them to its sweepstakes winners. The publisher helps the brands in finding the right boxes to sponsor. The sponsorships for this program have brought in at least $1 million in revenue in the first year. Group Nine hopes that the program can bring revenue in eight-figures. The brand gets the participants’ details for marketing, the publisher receives a fee, and the users enjoy the competition. It’s a win-win-win situation for all the involved parties.

Would Your Traffic Shift From Google To Its Alternatives?

Axios says that the business of privacy is booming. Rising distrust towards the big tech companies is boosting the growth of privacy-centric products. Many small companies are creating browsers, search engines, plugins, and many other products that limit Google and other ad tech companies from tracking users. Accelerated adoption of such products is building a small competition for companies like Google and Facebook. Which are some notable products, and how are they faring currently?

How big a dent can such companies form in Google’s business? We can’t say much because there’s no comparison between the tech behemoths and these startups. But, if the privacy wave continues to grow stronger, we can expect changes in the big tech’s modus operandi. The deprecation of the third-party cookie and the development of privacy sandbox are the early signs of the upcoming trend.

A new bipartisan bill seeks an algorithm-free environment for users. Critics argue that personalized content can violate privacy, promote extremism, and cause addiction to the services. So, online platforms should provide an option to access non-personalized versions of their content.

“Consumers should have the option to engage with internet platforms without being manipulated by secret algorithms driven by user-specific data,”

The companies with fewer than 500 employees, those with annual gross receipts lower than $50,000,000 in the last three-year period, and those that gather data on fewer than one million users annually are exempted from the bill. It means most publishers wouldn’t have to alter their content recommendations. But, if you acquire traffic from social platforms like Facebook and Twitter, their algorithm-free versions can impact the flow of visitors from these sources.

It’d be too early to draw any conclusions right now. First, we should see whether it becomes a law or not.

Next Post
How to Increase Your...
0 Comments
Leave a Reply Cancel Reply