Automatad Team
“The draft ruling will apparently identify infringements of the GDPR by IAB Europe, but it will also find that those infringements should be capable of being remedied within six months"
Share Tweet Share

The US digital ad spending will continue its strong growth in the coming years. But, most of the money is making its way to the triopoly of Google, Facebook, and Amazon. eMarketer reports that the ad spend will grow to $200 billion this year, a 38.8% increment from 2020. The triopoly will make up 64.0% of it. The share of non-triopoly businesses will continue to remain around 35% in the coming years. 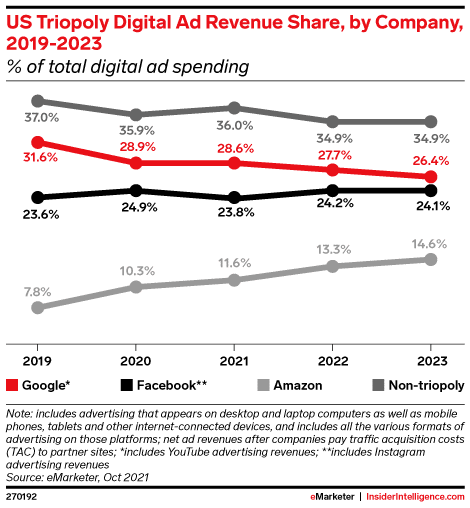 The big tech companies aren’t just dominating the ad tech industry; they are outgrowing legacy media companies too. The ad revenue of companies like ViacomCBS, NBCU, Fox, and Discovery was either negative or single-digit during the third quarter. But, Twitter, Facebook, and YouTube have grown their ad revenue between 60% to 90%. 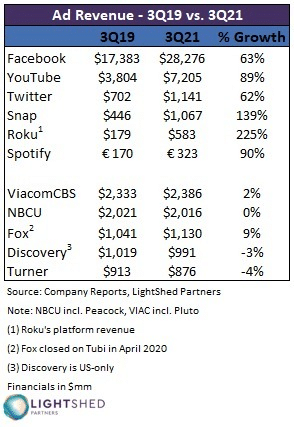 The travel industry is picking up slowly with the subsiding impact of the pandemic. The holiday season can further accelerate the recovery. The coming days will be an opportunity for travel publishers to earn revenue by helping their readers with their plans. Many publishers have already started implementing their editorial strategies to stay ahead of the curve. Digiday’s report has covered a few great publishers:

Many publishers offer audio versions of their articles. There are many solutions in the market that convert text to audio. McClatchy went with the trend and implemented the same. It has added an audio player above the articles, and it attracts a CTR of up to 5%. The publisher has started monetizing the audio stream with pre-roll and mid-roll ads. In this way, the publisher has created a new source of revenue from content. If you’re a publisher whose articles can perform well in audio form, you should try this strategy too.

IAB And Cookie Pop-Ups Can Be In Breach Of GDPR

IAB Europe introduced the Transparency and Consent Framework to standardize the cookie consent collection process in a GDPR friendly way. But, the Belgian Data Protection Authority (DPA) claimed that the framework isn’t GDPR compliant. The DPA claims that TCF doesn’t follow the principles of transparency, fairness, accountability, and lawfulness of the processing. The regulatory body came to these conclusions after its investigatory division analyzed TCF. As you’d expect, the IAB discards DPA’s claims. As a result, both parties are in a legal battle.

As per IAB’s recent press statement, the Transparency and Consent Framework can indeed be in breach of GDPR. It says that “the draft ruling will apparently identify infringements of the GDPR by IAB Europe, but it will also find that those infringements should be capable of being remedied within six months”. IAB expects the draft ruling to reach other European DPAs in the next two to three weeks — they get 30 days to review it and potentially file objections. If the other DPAs won’t agree with the findings, the European Data Protection Board will take the final call.

Multiple parties complained about the framework earlier. One of them was The Irish Council for Civil Liberties. It came into action as soon as IAB accepted its defeat. Its press release says:

“IAB Europe designed the misleading ‘consent’ pop-ups that feature on almost all (80%+) European websites and apps. That system is known as IAB Europe’s ‘Transparency & Consent Framework’ (TCF). These popups purport to give people control over how their data are used by the online advertising industry. But in fact, it does not matter what people click.”

IAB defended TCF for the past months, and now it accepts that the framework is not privacy-friendly. This incident casts a bad light on IAB. The whole industry trusts the entity as its representative. Many ad tech businesses are dependent on it for standardization and best practices. It should ensure that its solutions are impeccable. We expect more responsible behavior from any entity that works for the welfare of the industry.

Google has announced that publishers will be able to share their first-party data with its programmatic demand via PPIDs. Google Ad Manager will first convert the PPIDs to per-publisher partitioned IDs, so users cannot be identified across other publishers’ sites. Google Ads and Display & Video 360 will aggregate the anonymized data to build audience segments. Eventually, advertisers will target these segments to serve ads.

Google says that the new functionality will help in delivering relevant ads. Cross-device reach, frequency management, and creative optimization will be possible in programmatic inventory without the need for third-party cookies or other identifiers. As a result, the revenue of publishers will improve.

Cross-site profiling wouldn’t be possible for advertisers because the PPID will be unique for each publisher. The audience segments will be available only when there’s no other identifier present during the auction. It means that PPIDs will have no impact on publishers’ programmatic inventory where third-party cookies or other identifiers are still provided. PPIDs passed to Ad Manager cannot contain personal information or device IDs.

Would the solution work for you? Targeted ads will always command higher rates than generic ads. If you can deliver targeted ads, your revenue can increase irrespective of the identifier you are using. The main concern is whether you are privacy-compliant during the process?

Expensive, boring, and wrong: Here are all the news publications people canceled and why – Nieman Journalism Lab