Automatad Team
The most important thing about this refocus is not just deciding what we are going to do, but what we aren’t going to do.
Share Tweet Share

The growth rate of US digital ad spending has slowed down from its pre-pandemic speed. eMarketer says that the travel and the auto industry have severely decreased their budgets. Other sectors that benefited from the pandemic are ready to spend more. This year, we’ll see every sector increase its ad spend by at least 10%. 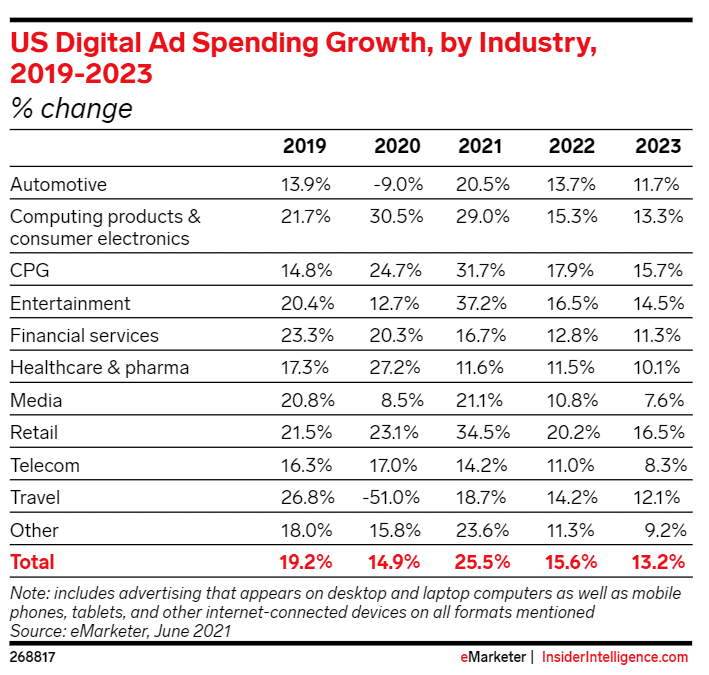 The retail, consumer products, and financial services will rule the roost with $47.59 B, $30.56 B, and, $24.49 B expenditures respectively. The entertainment industry will be the fastest to grow at the rate of 37.2%. Auto, telecom, and health & pharma will account for smaller shares than before.

The UK digital ad market is expected to grow 16.8% this year. Similar to the US, the travel industry took a hit in the UK too. But, it’ll rebound with a 33% growth this year. The retail industry will double its speed from 10.9% to 22.6%. Only the consumer packaged goods industry will see a deceleration from 25.4% to a 20.9% growth rate. 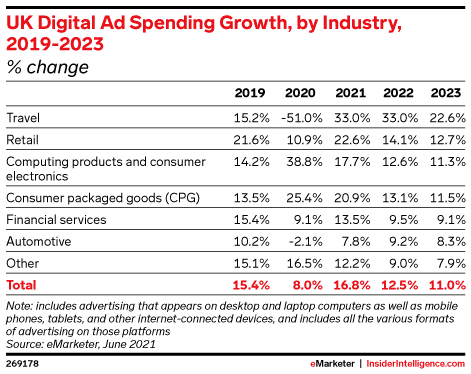 US ad spend expansion slows down in August

The month-wise data of the US ad economy shows slower growth in August. The 17.5% YoY increment is the slowest in the past half-year. But, the digital ad market remains strong with a 35.6% YoY expansion. While the top 10 ad categories grew only 12.5%, the smaller categories are providing the most support to the market with 27.7% more ad spend. 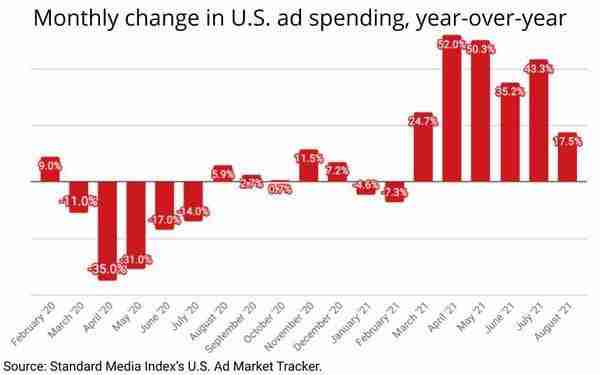 The video game market has seen significant demand during the pandemic. New games, along with the launch of the latest consoles, have also created a lot of buzz among gamers that are ready to spend. Advertisers are seeing more opportunities in the current environment. As a result, ad spend on video games is up by 17% in 2021. In absolute terms, the market has expanded from $360 million to $421.2 million.

Maven used to work with numerous long-tail publishers. It hosts sites, provides CMS, monetization solutions, and other publishing tools. Currently, it owns and hosts the domains of over 200 sites. But the media company has started narrowing its focus.

Do you have any content verticals that do not perform as per your expectations? How much effort do you put into the content production for those verticals? Is it worth investing your resources in them? Answers to these questions can help you strategize the same way as Maven.

News UK is building a robust way of providing first-party data to its advertisers. It has developed a data platform called Nucleus. The platform helps the publisher in collecting first-party data from its audience. Later, the advertisers can use the same platform to use the collected data and find the right audience. Many campaigns on News UK’s properties are already using Nucleus. The publisher is using the same data to improve content recommendations on its sites.

So, what has News UK reaped out of its efforts?

Criteo has continued its analysis of FLoC cohorts in a four-part series. The third article of the series is out. It tries to understand the utility, challenges, and shortcomings of the FLoC approach. Here are the highlights:

The lack of clarity in understanding the audience questions the utility of FLoC cohorts. It’s doubtful whether the solution can help to create a third-party cookie alternative.

Legislators are considering the empowerment of FTC to fight against unfair data practices. It means the FTC can receive more funding for staff and resources to work at a larger scale. The senators have already written the letter to the agency, urging it to undertake a rulemaking process to protect consumer data. Other objectives behind the move include strong safety for the data of members of marginalized communities, prohibitions on practices such as exploitative targeting, opt-in consent rules, and global opt-out standards.

What can be the implications for the industry? Creating a rulemaking process wouldn’t be a small task. So, even if new laws come out after FTC’s funding, it’ll take months for implementation. FTC will focus more on the big tech companies, so the impact on publishers will depend on how companies like Google and Amazon are affected. New regulations regarding the handling of user data may also come out. Other issues like opt-in, opt-out, consent processes, etc., are already under debate when it comes to privacy policies like CCPA and GDPR. So, it won’t be new for you.

Next Post
What do publishers n...
0 Comments
Leave a Reply Cancel Reply