Dentsu’s Global Ad Spend Forecast suggests a 10.4% growth in 2021. It says that the ad market will fully recover from the pandemic this year, and spending will exceed the pre-pandemic levels. Here are the trends that matter for publishers:

eMarketer discussed Advertiser Perception’s report in its podcast last week. The research company releases this report twice a year after talking to publishers about the SSPs they are using. The report reveals the most popular SSPs among publishers and investigates why and how they are working with their current SSPs. 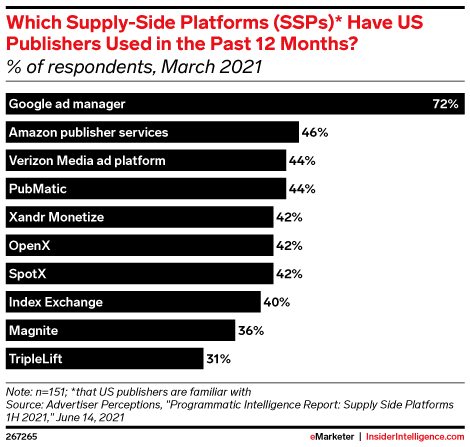 Google Ad Manager has been a consistent winner on the list, but we can see a tough fight for the second position. APS, Verizon Media, and Pubmatic, all have a 44%-46% share. The next three SSPs are also not very far as Xandr Monetize, OpenX, and SpotX each have a 42% share. It is a positive sign that the adoption of SSPs other than Google is picking up because publishers need competing SSPs to get the right value of their inventories.

Right to be forgotten in Europe can hurt publishers

Due to some recent court hearings, the right to be forgotten can pick up heat in Europe. The European Court of Human Rights recently backed the right and made a Belgian French-language newspaper Le Soir to anonymize the name of a driver responsible for a deadly car accident in 1994. Keeping digital articles about convicts can cause serious harm to their reputation even when they have served their sentences.

The European Union laws compel search engines to remove reports of historic crimes perpetrated by named individuals from their search results under the right to be forgotten. But, in the above case, even the publisher is ordered to anonymize the names. So far, publishers were not prevented from keeping the material on their sites.

Currently, there is confusion about whether the law will apply to the UK after Brexit. But, the bigger picture is that European publishers have to be considerate that they might receive data anonymization requests if the trend picks up.

Global Privacy Control is a valid signal for CCPA

California’s Attorney General has declared that companies have to honor the Global Privacy Control tool as a mechanism to opt-out of data collection under CCPA. The GPC tool enables the users to signal their privacy preferences to every website through a setting in their browser or a browser extension. At least 50 million people are sending GPC signals today via privacy-centric browsers and extensions, but none of the major browsers like Chrome and Safari have incorporated it. As a result, GPC will have a negligible impact on publishers (for now).

Colorado is the latest state to come up with a privacy law similar to CCPA. Ad tech companies have to honor opt-out requests made via browser settings or other global mechanisms. It’ll take effect from July 2023. Ad tech companies will also have to acquire consent before data processing – including information that reveals race, ethnicity, religious beliefs, health conditions, citizenship status, and sexual orientation. Similar to CCPA, the law prohibits companies from using dark patterns to hinder opt-out.

Arguments against the subscription business

We have talked a lot about the benefits of subscriptions for publishers. But we have also acknowledged that building a subscription revenue stream is not easy for everyone. This week, PressGazzette and Adexchanger have uncovered major challenges involved in the task. Here’s the gist for you:

AdExchanger’s 2021 Identity Special Report explores the industry outlook towards a cookieless future. It turns out that close to half of the industry professionals do not agree that email-based identifiers are more privacy-safe than third-party cookies.

Similarly, only 49% think that the Privacy Sandbox is a better solution than the cookie. Only first and second-party data wins the trust of 73% of the professionals. While 40% of the subjects think that the cookie loss will hurt advertising, the remaining expect either better or the same results after the transition.

The loss of the third-party cookie is dividing the industry. There are many factors at play that are hindering united efforts. For instance, there is skepticism that Google is trying to maintain its power in the guise of Privacy Sandbox. The demand side is fighting for more targeted advertising. Publishers do not want to lose their power to identity solution providers. Privacy-centric companies like Apple and Mozilla are against tracking. Many people also have high hopes for other methods like contextual and first-party data.

So, people have different views and motives, and the cookie phaseout presents opportunities or threats to different parties in the ecosystem. Reaching a consensus would be difficult, and we will see multiple alternatives to the cookie problem, regardless of the industry perspective.