Last week, the eMarketer gave a final look at the ad spending in 2020. The year was truly unpredictable but somehow the industry came out of it safely. 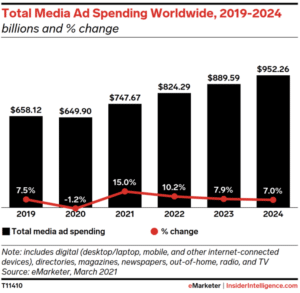 How Top Advertisers Are Spending

Digiday regularly asks the top advertisers in the industry about their plans for the coming quarters. It gives us a rough picture of how the coming months may look like — for open web and walled gardens. Here is what the advertisers are saying:

The race to build the ultimate identity solution is not slowing at all. We are seeing new offerings and partnerships almost every week. But the participation of publishers is the most important factor behind the success of any identifier. After all, they are the ones who’ll bring the audience data. So, there’s no surprise that many publishers are regularly being contacted by identity providers.

So, should the publishers start working with them? Digiday says some publishers, especially the larger ones, are skeptical. Thomas Lue Lytzen from Ekstra Bladet, one of Denmark’s biggest news publishers, worries that it’ll again become just an audience provider to the ad tech companies with no control over the data collected from its sites.

Some publishers are doubtful whether the methods applied by the service providers are privacy compliant. The NYT even finds sharing user data with identity solutions as a “sketchy” practice. A UK-based alliance that includes publishers like The Guardian and the Stylist Group, thinks that the identity solutions aren’t viable for the long term.

There are other concerns like whether the audiences want their data to be shared with third parties? Would the data be secure? Would it be shared across the ad tech providers? In a nutshell, top publishers are hoping for better solutions and they are also testing the waters before jumping the ship.

Annalect, the subsidiary of advertising holding company Omnicom Group is collaborating with Infosum, a privacy-preserving data collaboration technology. Annalect deals in data and analytics and this partnership will help it expand its first-party data management capabilities. Annalect’s CEO says,

“Adding an independent clean room provider to the Omni infrastructure will empower our clients to connect their first-party data with media and commerce platforms, as well as their broader supply-chain partners, while respecting consumer privacy.”

The Authenticated Traffic Solution (ATS) was developed by LiveRamp to enable targeting in a cookieless environment. The solution helps in recognizing the publishers’ known audience on the web to deliver targeted ads. Just like any other solution, its success depends on adoption. LiveRamp has recently announced that ATS is picking up across the world.

Rich Calkins, Director of Product Management at OpenX, has some suggestions for you to work in the cookieless future. So what should you do?

Publishers should start moving server-side because Prebid.js is mainly adopted for its cookie match rates. But, once the cookie is gone, there’s nothing to match. The incentive to use client-side bidding (match rates) will be gone so by moving to the server-side you will have the benefit of a faster setup.

Prebid offers 27+ ID modules. It already has many features that’ll be useful in the cookieless future and many more will be added soon. But which one works for you? You have to conduct rapid experiments to find the answer. At the same time, you have to actively update your bidder setup. “Set it and forget it” approach won’t work here.

US News & World Report is taking an e-commerce style approach while building its first-party data segments. It is using the concept of Buyer’s Journey to understand its users’ intent. In the words of Alex Kalaf, VP, Marketing, “We’re showing where they are in the decision-making process.”

For example, a user researching the best colleges in an area is probably a student ready to enroll in a degree program. Similarly, a user looking for the best restaurant in a city might be someone planning to dine out soon.

Such data can be very helpful to advertisers who do not have established e-commerce businesses or direct relationships with customers. After the third-party cookie is gone, the businesses that need this type of data will struggle even more. The publishers who employ this strategy can attract more demand.

There are hardly any popular social media platforms that do not offer content in Stories format. Be it Facebook, Instagram, Whatsapp, YouTube, you’ll find them everywhere. It’s becoming popular among the users so it’s obvious that everyone wants to create content in this format. Vice Media tried the same and it’s getting promising results.

The publisher has developed an app to create content in the Story format. Currently, more than 250 Vice employees are using it to generate over 3,000 pieces of original content every month. Result? Its average impressions per post are up 72% across Vice Media Group. The Instagram followers of Vice World News went from 100,000 to 600,000 in six months.

The publisher is now producing more Stories than text and videos. And Vice is not the only publisher who benefitted from the format. Bustle Digital Group also leveraged Stories while it was doubling the revenue of W Magazine.

The Information staffs up in a push to reach ‘hundreds of thousands’ of subscribers – Digiday.

What is Footer Biddi...