Automatad Team
"We’re doubling down on our commitment to audio and will be experimenting rapidly and boldly in this space."

Ad blocking is shooting up on mobile devices. Here are the highlights from Blockthrough’s 2021 PageFair Adblock Report.

There has been a change in people’s habit of scrolling due to the rise of work from home. Chartbeat found that the users reading articles on desktop sites have started to engage more after the pandemic started. There can be many reasons behind the trend including the rising desktop usage. But, the bottom line is that people are scrolling deeper through articles on desktops. 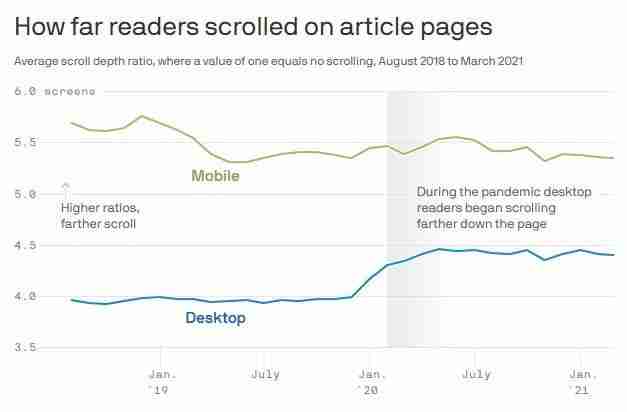 The desktop has better metrics than mobile in terms of ad blocking and user engagement. The pandemic has changed how desktop users behave online. You should study and understand these changes to make sure that your user engagement strategy on desktop gets you the best results.

The pandemic and the lockdowns had an immense effect on people’s mental health. As a result, there’s been a rising interest in the subject. For instance, Dotdash’s mental health vertical Verywell Mind grew 53% YoY.

To help its users and to build authority around the subject, the publisher has decided to start a new research initiative called the Mental Health Tracker. It’ll be managed by an in-house research team that’ll poll 4000 subjects every month to understand how they are mentally coping and responding to the reopening of society coming out of the worst of the pandemic.

There’s already a section on the site called Return to Normalcy that helps users in adapting to the new circumstances. The findings from Mental Health Tracker will help the publisher with creating the best, unique, and most helpful content for the purpose. The publisher also sees the opportunity to monetize the initiative with sponsorships.

The rise of audio is a hot topic in the media industry and everyone is preparing for it. The Washington Post introduced audio articles last year on Android and iOS devices. It was a huge success. The Managing Editor of the post says,  “We saw that trend throughout last year as readers who listened to audio articles on our apps engaged more than three times longer with our content.” She further says, “We’re doubling down on our commitment to audio and will be experimenting rapidly and boldly in this space.”

The Washington Post has taken another step forward by integrating Amazon Polly within its ecosystem. Amazon Polly is a cloud-based web service that can convert text to speech. It’ll be integrated across all the platforms, the current text-to-speech service on Android and iOS will also be replaced by it as Amazon Polly will deliver a high-quality audio experience. The publisher will introduce more playback controls for the voice articles.

Both the publishers are trying to deliver a unique and the best experience to their users. They are relying on unorthodox methods to do so. We can hardly doubt that their efforts wouldn’t payout. As a publisher, ask yourself the question — how my user behaviour has changed and what can I do to cater to the new behavior?

iHeartMedia has launched a PMP specifically for podcasts. The new offering will bring the scale to podcast advertising that the traditional host-read ads couldn’t bring. Programmatic ads will also help the publisher in monetizing its back catalog of more than 100,000 podcast episodes.

The advertisers in the marketplace can target based on podcast categories such as history, music, sports, etc. Psychographic categorization of shows such as “deciders,” “explorers,” “advocates” or “rising stars” etc will aid further in targeting. It’ll be similar to cohort-based targeting with minimum dependence on cookies or identifiers.

Hearst is helping its advertisers to reach interior design professionals and design students through its free event. The event is free but profitable because it has been sponsored by Caesarstone, Design Within Reach, Kohler, Longaberger, and Obakki. Several thousands of users have already registered for it.

The event will be a series of two-hour-long virtual masterclasses. The event panelists include designers and educators specialized in the space. The topics will include the importance of nature, building your design business, and designing for a better world. The contents of the event will be a mix of consumer and b2b content because of the wide spectrum of attendees. The publisher has planned more such events for later.

iHeartMedia and Hearst are finding new ways to gather like-minded audiences and then they are dealing directly with the advertisers to help them with targeting. Whether it is a PMP deal or a sponsorship, the advertisers are paying for their target audience.

Almost two weeks have passed since Apple released iOS 14.5 update that requires apps to ask for permission to track them across other apps and sites. So far there were speculations about how the update can affect the industry but now we can have real-world data to conclude. Of course, such a short period cannot give us enough data to draw the complete picture, but a rough idea can still be formed.

Mobile analytics company named Flurry Analytics reveals that only 11% of users with the new update have allowed tracking. The number drops to 4% when we talk specifically about US users. It’s noteworthy that only 8% of the users have iOS 14.5 and most of the apps aren’t updated yet and therefore they are not allowed to access IDFA. 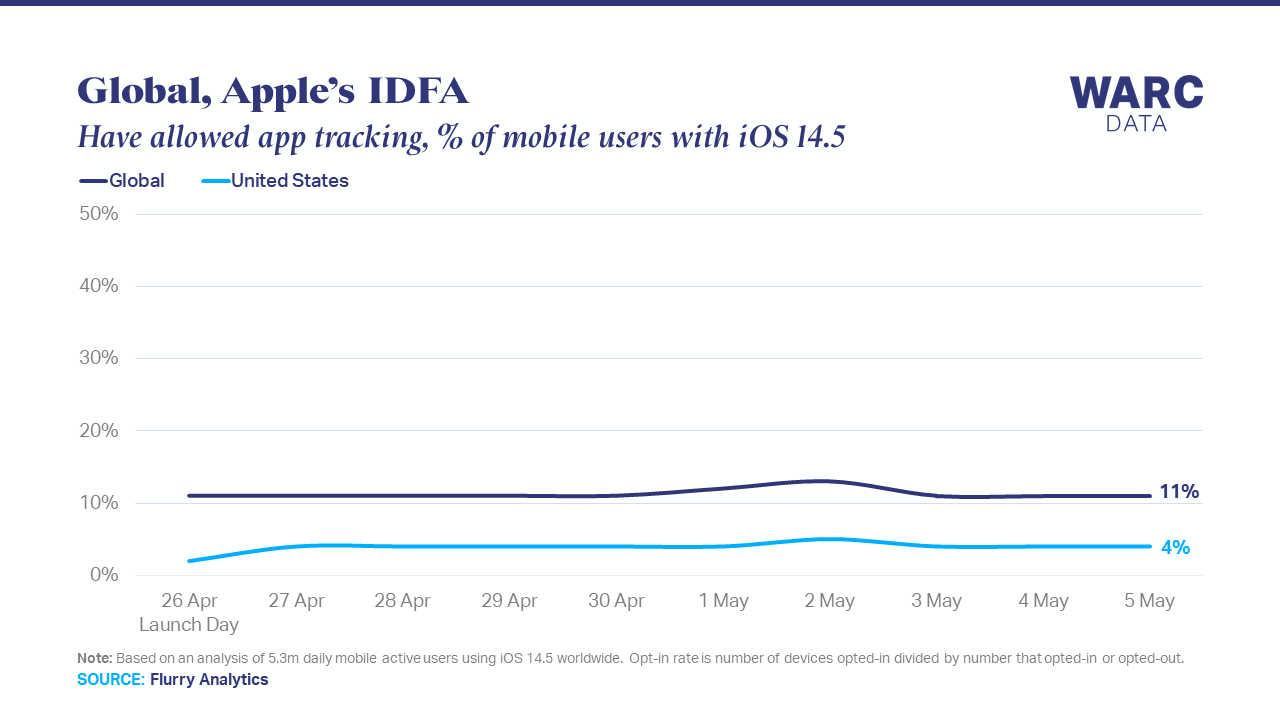 Digiday asked some industry executives to find out how they are impacted by the update. As per Jean-Sebastien Laverge, SVP of Growth at Tilting Point, the number of opt-ins varies with screen implementation. But the ratio is close to 80:20. Blis, a mobile ad tech vendor, informs that 70% of the bid requests were without IDFA.

As we said, not enough devices and apps are updated, so it’s better to look at the cases where the devices could receive the prompt and had access to the identifier. In the US, 46% of such devices opted-in to share their data, whereas in the U.K. and Australia those rates dropped to 19% and 13% respectively. The data might be skewed because the sample size is not large enough.

Twitter is buying Scroll, the subscription service that removes ads from news sites – The Verge.

The Subscribd dilemma: Premium news bundles a ways off – Digiday.