Automatad Team
“We’re eager to better understand these [cookieless] solutions such as FLoC and how we can take part in them. So far, we haven’t gotten an opportunity to meaningfully test [FLoC]. Just evaluating the technology is hard.”

One of the many arguments against non-personalized ads (no user targeting) is that they can hamper the growth of open web and users have to pay for accessing the information that is free today.

The most important question is would users rather pay than receiving personalized ads?

The answer is ‘no’. A survey of 2400 adults conducted by IAB in six European countries shows that 75% of the users would choose the present internet over the internet without targeted ads, where they would need to pay to access most sites and apps. 48% of the users would reduce their internet activities significantly instead of paying for subscriptions. An average European would pay for not more than 5 sites and the majority of them would subscribe to music and email services. News is “very important” for 45% of the users but only 28% of the users are ready to pay for it.

But, the landscape is a little different with the app users in the US. Only 31% would allow the apps to track them whereas 30% would be ready to pay. Another 30% of the users would like to find a middle ground. 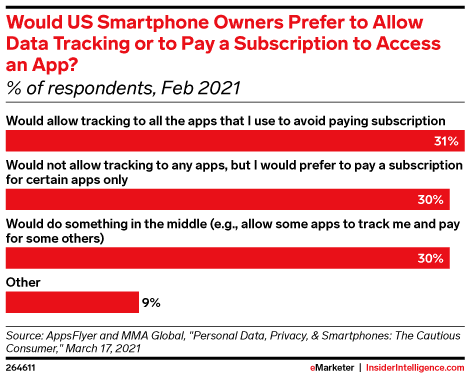 Back to pre pandemic level

Advertising platform Mediaocean analyzed 300 advertisers with a collective spend of more than $3bn across Amazon, Facebook, Instagram, LinkedIn, Pinterest, Snap, and Twitter. As per the company, the ad spend is back to pre-pandemic level boosted by the restored confidence of businesses. The upward trend started after July and March 2021 witnessed a 31% YoY growth.

The same confidence is visible in the UK ad market as well. eMarketer has revised its predictions and we can see that 2021 will be better than expected and the trend will continue in the coming years. 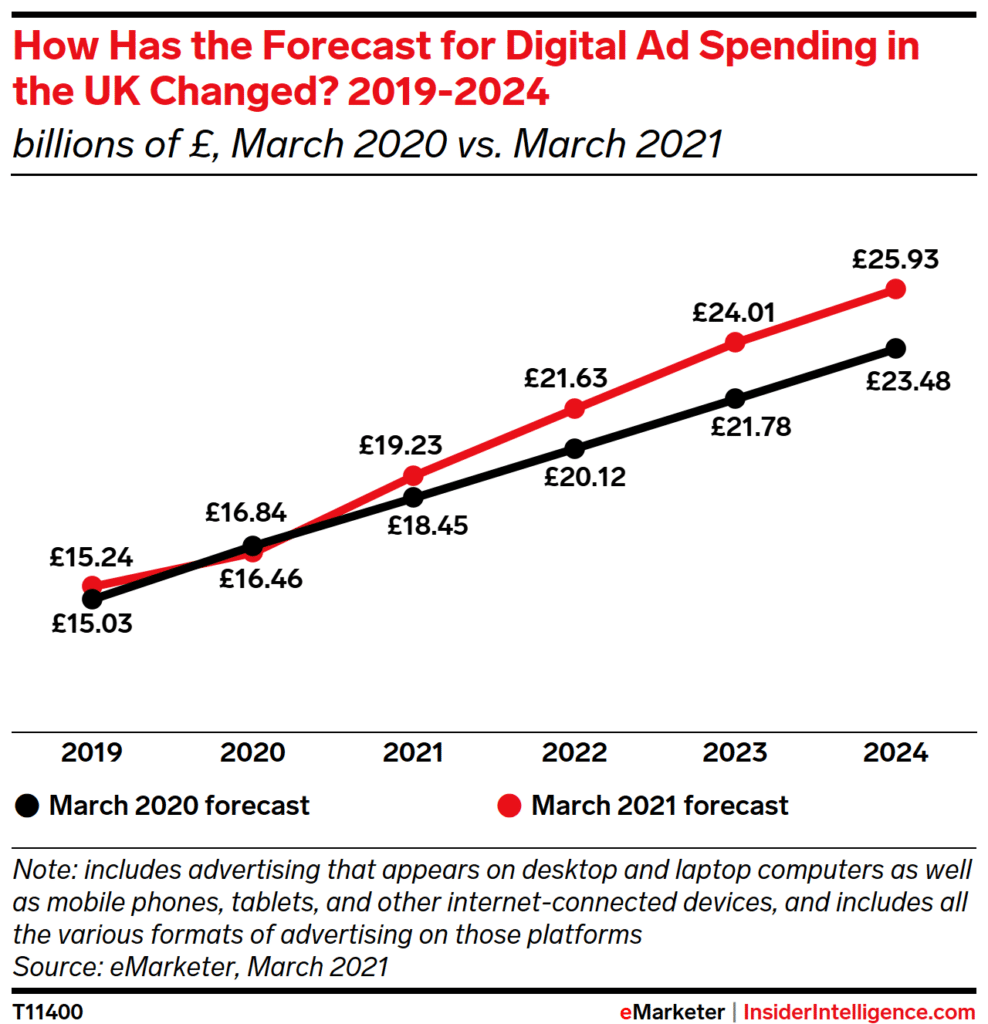 If users allow tracking and the ad spend keeps rising, independent publishers would be in a better place. That being said, you should keep working on your opt-in strategies and first-party data strategies. It’ll help you in minimizing the revenue loss to the users who do not opt-in.

Strategies from Top Media Cos.

As we said in the previous section, you need to keep working on your first-party data strategy. Here’s a leaf that you can take out of Gannett’s book. The publisher is building audience segments that replicate the ones advertisers find using third-party cookies. It is upgrading its customer data platform and adding more and more registration points to its sites. The goal is to reach 10 million subscribers by 2025.

Additionally, the publisher will try FLoC and will be building audience segments for contextual targeting as well. Third-party identifiers, including NewsPass ID and Verizon Media’s ConnectID will also be tested for the cookieless future. In this way, the publisher is working on multiple fronts so that it is not dependent on a single solution. The CDP can be seen as the backbone of the strategy whereas success depends on how efficiently the publisher can execute it.

Gaining subscribers is one of the best ways to collect useful first-party data and diversify revenue. The Wall Street Journal is doing the same with its brand campaign called “Trust Your Decisions” which focuses on the publisher’s role in the readers’ decision-making processes in business, finance, and in their personal lives.

It’ll run ads in print publications, online, on social platforms, and in physical locations for the promotion. As a part of its influencer marketing, WSJ will send merchandise with the word “Decision Maker” emblazoned on mugs and T-shirts to media and marketing influencers and Journal members. It’ll also drop its paywalls for a day on May 20 to make the content available for free to its potential subscribers. Readers will have to give their email for free access so that WSJ can continue marketing afterward.

In 2015, Apple wanted to become an adtech company. Its ambition was to acquire 50% of the mobile ad market by selling targeted ads. It’s clear that Apple couldn’t achieve its dream and it took a different route altogether. Now, Apple beats the Privacy-drum, and the whole ad tech industry is impacted by it.

Critics argue that Apple is becoming another walled garden that leverages its users’ data to make money. With its ATT update, Apple is trying to make ad targeting difficult on its devices and this pushes advertisers to spend their budget on Apple’s ad products. It has launched search ads on its App Store that offers better attribution than in-app ads. The setup of search ads is also easier so that the marketers choose them over the in-app ads bought from third-party vendors.

ATT will make it difficult to measure campaign performance. While targeting opted-out users, advertisers who buy ads through third-party platforms will have to wait three days for insights on their campaigns and will receive only aggregate information. On the other hand, advertisers who buy Apple ad space can receive more data about user behavior.

The lack of data will lead to a drop in demand as well as in the prices of the publishers’ inventories. If advertisers end up buying ads directly from Apple instead of working with third parties, it’s not a surprise.

Apple is trying to incentivize the buyers to control the ad spend. App makers will be affected the most but publishers should also expect a decreased revenue from Apple users. The company’s moves look anti-competitive to many parties in the industry but we can’t be sure whether the government authorities will intervene.

The race to find a cookie alternative continues and this week we saw two companies offering new solutions. The ad tech company Criteo has launched a solution for contextual targeting that utilizes first-party commerce data. The company says that the solution will help marketers to continue to drive and measure incremental revenue in a post-cookie world.

It’ll be equipped with AI and machine learning capabilities to better classify content in the open web. The first-party commerce data will come from the company’s 5,000 direct, premium publishers and major SSPs across 100+ regions. It helps the company in delivering personalized product recommendations without relying on third-party cookies.

The second offering is from the identity solution provider Intent IQ. It has introduced a new opt-in data sharing choice proposal. The proposal named Data Sharing Choice (DSC) is powered by opt-in pop-ups and allows for sharing of the site’s first-party cookie identifier, IP address, and user-agent, which are anonymous if not matched with personal information. The company says that this method covers over 80% of ad inventory with 90% accuracy. On the other hand, third-party cookies offer 56% coverage and log-in solutions offer coverage of less than 20%.

Last week, we saw the NYT rejecting UID saying it won’t use solutions that rely on a lot of data transfer about the users. But the publisher has taken a different move for FLoc.

“We’re eager to better understand these [cookieless] solutions such as FLoC and how we can take part in them. So far, we haven’t gotten an opportunity to meaningfully test [FLoC]. Just evaluating the technology is hard.”

BT is the latest advertiser to take a ‘fixed fee’ programmatic path – Digiday.

Why Time sees opportunity in Bitcoin for advertisers and consumers – Digiday.

Next Post
A Complete Guide To ...
0 Comments
Leave a Reply Cancel Reply