Weekly Roundup: FLoCs to Replace Cookies, Impact of the Pandemic, Rise of Newsletters.

Automatad Team
"Advertisers can expect 95% of the conversions per dollar spent compared to cookie-based advertising". 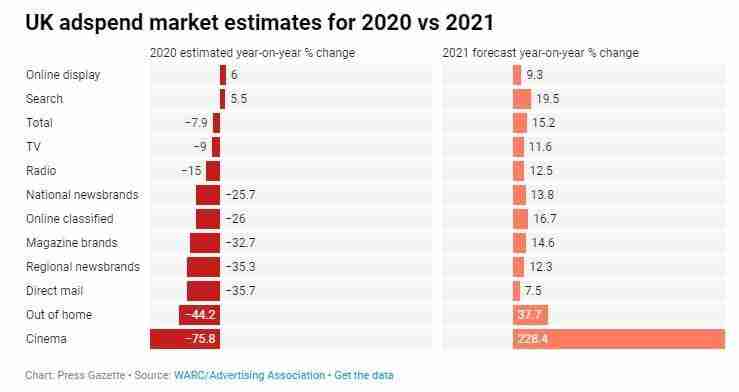 The Pandemic’s Impact on Publishers

Digiday’s survey of 181 publishing professionals probes the pandemic’s impact on publishers. Here are the key findings:

A survey of 2,012 Apple users reveals that 74% of them would rather be tracked than pay for the use of sites and apps. So far, 72% of the users are aware of Apple’s upcoming policy changes. While 65% of the survey respondents agree with the policy, 23% think the company might be taking it too far. There are multiple scenarios where the users are comfortable with tracking:

UK’s ad spends predictions show that the world is recovering faster from the pandemic. Post-pandemic changes in publishers’ revenue-share are also minimal. We can say that the industry is almost on track. The survey of Apple users signals that IDFA changes may also not have a huge impact on your revenue provided you convey what data is being collected and why.

There are already many sandbox proposals suggested by multiple parties. TURTLEDOVE suggested moving auction into the browser. SPARROW suggests using an independent third-party server for the same purpose. DOVEKEY proposes adding a key-value server to SPARROW. Then there is PARROT that seeks publishers’ control over the auction process. Chetna Bindra says that FLEDGE tries to take the best of all these proposals.

Another Google blog explains, “FLEDGE includes a way for on-device bidding algorithms to use additional information from a new trusted server designed for this sole purpose. To help early experimentation before the new trusted servers are available, we propose a “Bring Your Own Server” model and expect to ship this first experiment during 2021.”

Digiday’s article on the topic says that Google may hash out the criteria of considering a server as trustworthy. There are many possibilities. A trusted server may be independently controlled by a third-party, or it may involve code audits, or other security methods.

The FLEDGE experimentation will start in Q2. The company may also bring another proposal to help personalized ad targeting FloCs (interest-based audience cohorts).

Google has already shown a lot of confidence in the FLoC proposal. It says that advertisers can expect 95% of the conversions per dollar spent compared to cookie-based advertising. FLoC will be available for public testing by March. Google says that the figures should be reassuring to publishers as well.

Just like most Google offerings, the industry is skeptical about the proposal. Some professionals say that it can give too much power to Google, while others believe it’s not safe for users.

Facebook is creating a competitor for Substack. The company has its eye on the fast-growing newsletter space. As per NYT, the product will allow individuals to build a following on and earn money through paid subscriptions. The effort would be part of the Facebook Journalism Project. It’ll help the company to provide more legitimate news sources.

Twitter is also on a similar track. It has acquired Revue, another company similar to Substack. Major publishers like Vox Media and The Markup are its clients. Currently, Twitter has made Revue’s pro features free for all accounts. It has also lowered the paid newsletter rev-share to 5%. The company has already started hiring professionals to grow the platform.

Paid-newsletter is a growing market. It’s natural for the industry players to run for a piece of the pie. So, should you start a newsletter too? This report from Reuters Institute might have some answers:

No matter how many modes of communication are available, email has held its ground firmly. It is an important part of people’s lives. A successful email newsletter strategy can bring you a lot of paying customers. Facebook, Twitter, Forbes, etc., have already sensed the opportunity with email newsletters. It’s time for you to get ready.

Take advantage of the Reuters Institute study and other similar reports to understand the audience. Use data to come up with the right plan.

Publishers Are Unique; So Should be their Approach

Just like email newsletters, the podcast space has also witnessed significant growth. A four-digit growth is expected from 2015 to 2024.

But the meteoric rise doesn’t mean that any publisher can succeed in the space. Axios reports that only the top 1% of publishers receive 99% of the downloads.

Denmark’s biggest news site Ekstra Bladet has recently stopped using Google Analytics. It has replaced the tool with its proprietary tech for its data-related needs. Now there is no middle-man between the publisher and its audience data.

The number of available data points has increased from 30 million to 130 million. The speed of retrieving the information has increased significantly. The publisher is attracting the advertisers with the sheer amount of data it can offer.

Again, a unique approach has helped the publisher in gaining better control over its business. You should have a similar modus operandi while following industry trends.