The US Ad economy expands further.

The US Ad Market Tracker reports further expansion in the ad economy. December was the fifth consecutive month with positive YoY growth. The ad spend in the US grew by 7.2% when compared to December 2019. Among all the formats, digital media lead the growth with 30.7% YoY growth. 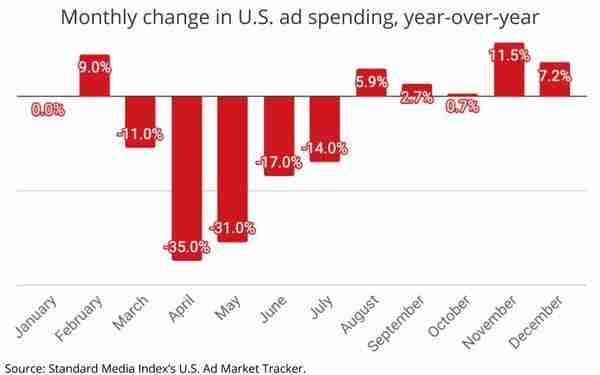 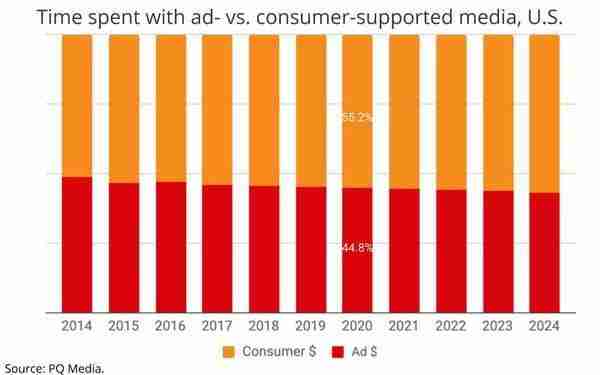 Compared to ad-supported services like news sites, premium services like Netflix and Spotify tend to engage the consumers for a longer time.

We shouldn’t assume that ad-supported media is losing popularity due to premium services. The natures of both media formats are vastly different. Consumers engage differently with both of them. But the finding proves that the US consumer has an appetite to pay for quality content. At the same time, ad spend is rising, and digital is leading the way. It shows that publishers with great quality content have nothing to worry about.

Marketwatch and Barron’s Venture in Europe

Between 2017 and 2019, Marketwatch had the highest traffic increase among all the UK business news sites. The average number of unique visitors increased by 62% in 2019. Dow Jones is the owner of Marketwatch. The publisher also owns Barron’s, another successful publication with a high net worth audience. Marketwatch and Barron’s are US publications that are growing fast in Europe and the UK.

Both the publications complement each other. While Marketwatch delivers fast-paced financial news, Barron’s caters to long-term investors with actionable insights and financial advice. A single group of reporters produces the content for both sites for Europe and the UK. Both the sites have strong brand images, and the publisher is leveraging them to set foot in the new market. The team of reporters creates content dedicated to the newly targeted market.

“When you look at the stories that have done very well, they tend to be either of global impact or have a very interesting European angle.”

The team works in the European time zone, so whenever there’s an out-of-hours US news, the publisher is quick to jump on it. The sites divide their content into three categories:

So, during US-hours, the team puts more US-focused content on the home page. Europe and UK-focussed content take prominence on the homepage on the other side of the day. The publisher analyzes data to find out the stories suitable to target the respective markets.

To acquire a new audience, you have to understand the market first. Data can be your best friend. Create content that has a strong focus on your audience. You can cater to multiple geographies when you keep timezone in mind.

Forbes has a unique and scalable plan for its subscription business. It’ll help journalists to launch their paid newsletters. The revenue split will be 50-50. In the beginning, it’ll hire 20-30 writers with a significant following in their niches. Later, Forbes will make the platform available to its 2,800-person contributor network.

Forbes will give all the editorial help and salary benefits to the writers. They’ll get a cut from the ad revenue. Forbes will also pay them based on pageviews. The writers’ audiences will start following them on Forbes. The popularity of the writers will give the initial boost to the program.

This move will bring many benefits to Forbes. Its revenue will diversify, its newsletter offerings will increase, and it’ll garner a new audience as well.

While most publishers have big plans for their email subscriptions, we should not ignore consumer preferences. A study by What If Media Group reveals that a whopping 84.1% of consumers are unwilling to pay for newsletters. 79.6% would prefer to access the ad-supported content for free instead of paying for it. Only 71.5% of the willing consumers are ready to pay up to $10. Overall, 52.7% of the people do not subscribe to any newsletters.

This shows that gaining subscribers for newsletters is not equally easy or difficult for every publisher.

PressGazette shows how crowdfunding is becoming a promising source of funding for some publishers. Its research finds that the 30 single-biggest crowdfunded projects have raised $21 million since 2012. Spanish publisher El Español alone raised $3.9M in 2015. The interest in funding independent projects has increased a lot in the past decade. 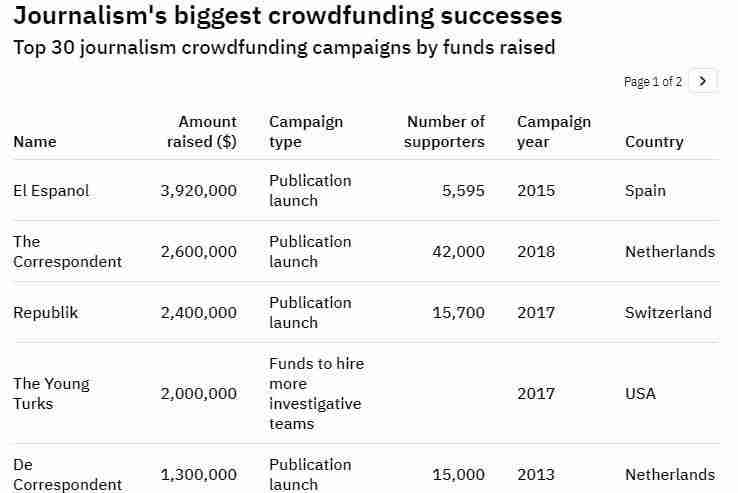 Kickstarter is one of the most popular crowdfunding platforms. Its data shows that the amounts of crowdfunds have increased exponentially over the past few years. 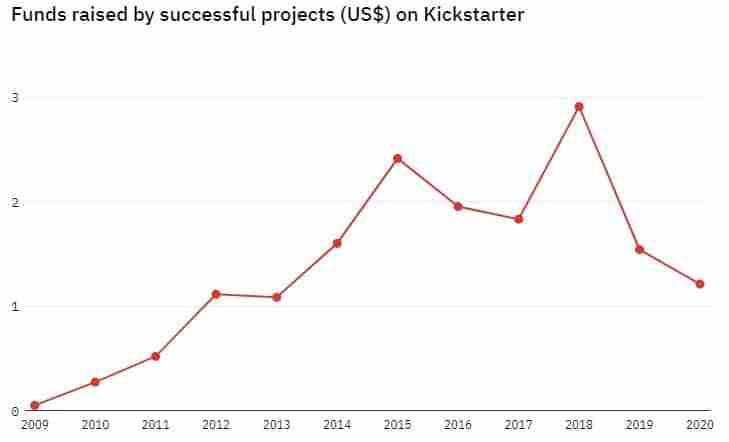 The number of backers of the project has also followed the same trend. 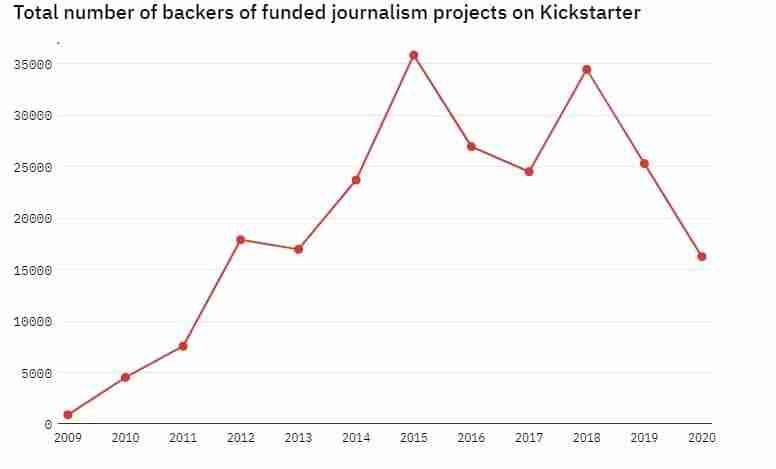 Diversifying your sources of funds is a best practice in publishing. There are many ways to generate the funds, some conventional while others unconventional. Developing the newsletter business is common among publishers, but Forbes is approaching it uniquely. Its new platform will be a win-win for both Forbes and its writers.

Crowdfunding is a highly unconventional way of raising funds. It’s not for every publisher. You should plan wisely before jumping on a decision. Your sources should be predictable and sustainable in the long run.

Google is consistently in the news for its anti-competitive practices. This time it wants to set the records straight by busting all the “misleading claims” against its ad tech business. Google’s Adam Cohen, Director, Economic Policy, published a blog where he answers major questions in the complaint in a Myth VS Fact format. Here’s the summary:

Fact: Our fees are actually lower than reported industry averages.

Myth: We created an alternative to header bidding that “secretly stacks the deck in Google’s favor.”

Fact: We created Open Bidding to address the drawbacks of header bidding. As a result of our work, there are alternatives to header bidding that improve the user experience.

Fact: Facebook is one of over 25 partners in Open Bidding, and their participation actually helps publishers. FAN’s participation increased demand for publishers’ ad space.

Fact: AMP was designed in partnership with publishers to improve the mobile web.

Myth: We force partners to use Google tools.

Fact: Partners can readily use our tools and other technologies side by side. The average large publisher uses six different platforms to sell ads on its site and plans to use even more this year. And the top 100 advertisers use an average of four or more platforms to buy ads.

Fact: Consumers expect us to secure their data—and we do. we’ve created privacy-protecting solutions that enable other ad tech companies to continue to operate and introduced an open and collaborative industry initiative called the Privacy Sandbox, which is working on alternatives to cookies that preserve privacy while protecting free content.

Google is trying to take a tough stance in Australia too. It has threatened to make its services unavailable in the region if the authorities keep forcing it to pay publishers. It argues that the company already helps the publishers by sending traffic.

How To Track AdBlock...