Automatad Team
“If Google releases this technology they will effectively own the means by which media companies, advertisers and technology businesses reach their consumers and that change will be irreversible.”
Share Tweet Share

The old concerns around Google’s Privacy Sandbox have now started taking shape. A newly formed group called the Marketers for an Open Web (MOW) has filed a complaint against Google with the Competition and Markets Authority (CMA) in the UK. They fear that after the launch of the Privacy Sandbox, Google will have sole control over advertising on the internet.

Publishers could lose two-third of their revenue if Google restricts publishers from utilizing cookies. Smaller regional publishers would be hit the hardest, journalists will lose their jobs and reliable news will be under threat. The group asks the CMA to delay the release of the Privacy Sandbox until some long-term competitive remedy is laid out to make a leveled playing field.

The concerns are valid because Google will phase out the support for the third-party cookie in Chrome browser by early 2022. After the cookie is phased, Google plans to replace the tracking tool with its Privacy Sandbox. While Privacy Sandbox is not the only tracking solution for the future, the fact that it is being developed by Google puts it up for scrutiny. Google owns the most-used browser, it will own the Privacy Sandbox, ultimately everything will be in Google’s hands.

“If Google releases this technology they will effectively own the means by which media companies, advertisers and technology businesses reach their consumers and that change will be irreversible.”

Google maintains that Privacy Sandbox is an open initiative built in collaboration with the industry. It says that the ad-supported internet is at risk and advertising practices have to evolve to save it. The sandbox will make it possible to deliver relevant ads without micro-targeting people. 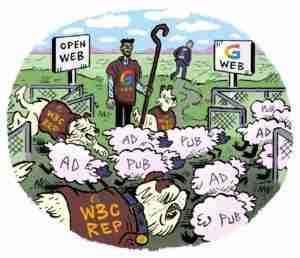 The CMA is taking the matter seriously. It is even ready to open a formal investigation under the Competition Act. If required, it can choose to block the launch of the Privacy Sandbox to allow time for a full investigation, but no final decisions have been made yet.

Though the COVID-19 cases are increasing across the US and worldwide, advertisers aren’t planning to pause or cut down the ad spending anytime soon. If you’re wondering why, it’s almost December and consumers are expected to shop like never before via online platforms and eCommerce stores. But that’s not all.

Digiday talked to agencies and advertisers and here are some of the possible reasons.

As advertisers have already experienced the rising wave of cases and been adjusting the campaign, they are more prepared and built in more flexibility into their campaigns.

“Agencies and clients proactively built flexibility into plans to protect themselves in the event they needed to pull back advertising.”

– Catherine Warburton, evp and chief investment officer at 360i.

As you have guessed, pent up budget and the need to make up for the losses occurred during the previous quarters are also the reason why advertising is expected to stay up and consistent. Considering the fact that there’s just a few weeks left to hit the target sales and revenue, advertisers are likely to keep up the spends.

Good and effective partnerships with publishers gave confidence to advertisers this time. They’ve worked out better ways to communicate, pause/resume the campaigns, and most importantly, likely have seen the results as well.

We wouldn’t take it as ‘business as usual’ but consumers and the market is more hopeful, thanks to the news of vaccines and December never fails to spread positivity and hopefulness. Want to read more? Head to Digiday.

The idea that Google should pay publishers for using their content in its search results has been there for quite some time. Even the European and Australian government authorities have been building pressure on the tech giant to do the same. Google obviously has been against this idea. It has not only denied paying any fee to the publishers, but it has also surfaced the idea that it’ll change the way their articles appear in search results instead of paying for them. But recently, Google’s stance has changed a bit (amid the antitrust investigation.)

It planned to pay $1 billion to publishers with its product called News Showcase. It’ll be used in Google News, Discover, and Search. It’ll help publishers in increasing their paid subscriptions as well. Last month Google announced that it signed deals with more than 200 publishers in Germany, Brazil, Argentina, Canada, the U.K., and Australia.

In the continuation of the events, Google has started working with the French publishers to abide by the government. It has signed copyright agreements with six newspapers and magazines. The agreements are based on criteria such as the publisher’s contribution to political and general information, the daily volume of publications, the monthly traffic, and the use of its content on Google’s platform. Google will do the same with other French publishers and will reach a framework agreement by the end of the year.

So Should Google pay the publishers? Well, there’s a lot to discuss and we need a separate post for it. But, we know for sure that publishers will be benefited from such arrangements. If the search engines start paying publishers, then it can become a major source of revenue. However, publishers shouldn’t get our hopes high. It’s very unlikely for Google to pay all the publishers when in fact, it is the one driving traffic to their sites.

The pandemic impacted many industries and media is one of the most affected one. We rolled out a guide on how publishers can deal with COVID-19 and continued to work with our publishers. It’s safe to say that we are seeing the uplift in revenue across the board and some publishers have exceeded the expectations.

It turns out the industry, especially, the media giants are recovering fast too. An analysis from Press Gazette shows that several large news publishers have not only bounced back but also are worth more than before. 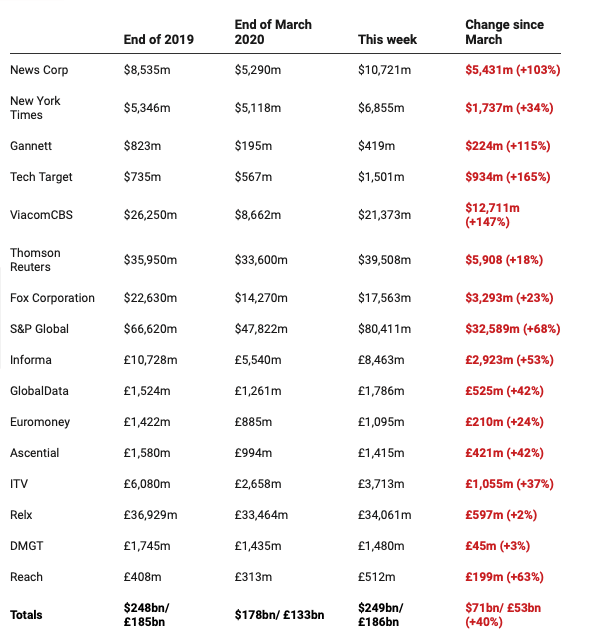 “All of the 16 publicly-listed companies we examined have recovered from the depths of the pandemic, with their market values (or market capitalisations) up an average of 40% since the end of March.”

– Vaccine news pushed investors to get back on the stock market and invest more confidently on promising media brands. After all, they’ve survived an unexpected pandemic and still standing strong.

– Pandemic helped media companies to cut budgets and improve profitability. Several outlets have shown improved performance and rolled out effective business strategies that further boosted the confidence of the market.

It’s no easy job to thrive amid the crisis and some of the largest and not-so-large media brands have done it. They took bold initiatives, diversified the revenue streams, and quickly adapted to offer what advertisers want now. If you’re interested in keeping up with the business strategies of top media brands, check our ‘Becoming Series’.

DOJ Opens Pandora’s Box And Forges A Path For The Cookie’s Return – AdExchanger.

Another bit of good news from Apple: Publishers can now offer targeted discounts in the App Store – NiemanLab.

How To SPO – AdExchanger.

Next Post
4 Types of Adops Too...
0 Comments
Leave a Reply Cancel Reply