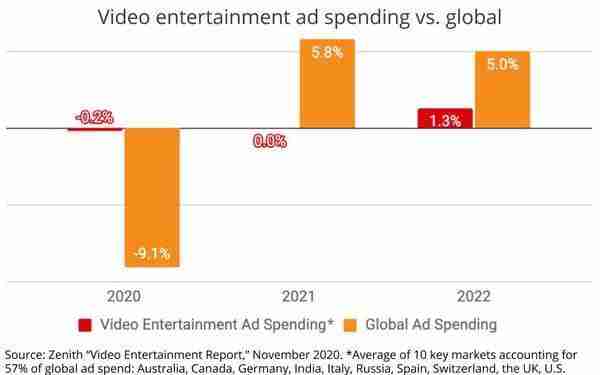 However, video entertainment does not have a great long-term perspective as the growth will remain flat in the coming two years while the global ad spend will grow in the range of 5%-6%.

How the top advertisers are spending during the crisis?

Digiday has recently analyzed how the top advertisers in the world are spending their budgets during the pandemic. Here are the findings:

Cybersecurity company Cheq predicts that marketers will lose $35 billion to ad fraud this year. It’ll be a 17% YoY increase despite the reduced ad spend during the pandemic. The amount is so high because of the continuously evolving techniques in fraud.

“If there are suddenly new platforms no one even imagined a few years ago, we’re going to see upticks in fraud”

The UK’s ad market will remain badly affected by the pandemic till 2022. The ad spend will be down by 14.5% in 2020, and the gains in 2021 will not be enough to cover the losses from 2020. But the good news is that the magazine brands and regional news brands will perform well due to strong growth in their online formats. 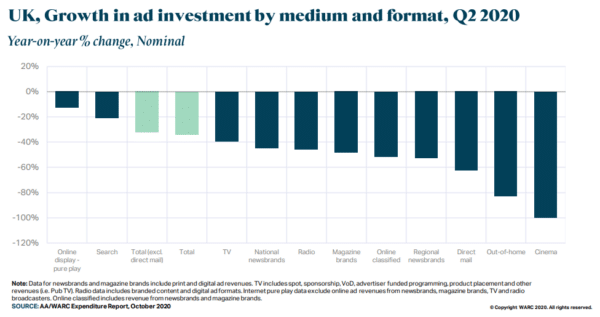 We have witnessed similar trends in Q2 2020 too.

It’s time for the publishers (if you rely on video ads) in the entertainment niche to embrace diversification in the content strategy. Otherwise, the coming next 2 years may not bring much growth to your business. Similarly, the publishers in the automobile niche need to be proactive. As the ad frauds are rising, you should know that you’ll be vulnerable to it due to the decreased demand for your inventory. Publishers from the UK should keep more focus on their digital business.

Kids News is on the Rise

Axios has pointed towards a new trend among the news publishers in its weekly newsletter. It says that more and more news publishers have started producing content focussed on kids. The parents are welcoming it too. They are ready to pay for the content as it helps them in managing their kids’ learning during their work-from-home life.

The Week magazine has started The Week Junior, and it has garnered 75000 paid subscribers. Time has launched Time for Kids that delivers classroom news content to kids. NBC Nightly News has started a kids’ edition, and NowThis has brought NowThis Kids. Nickelodeon’s kids’ news product is currently under the pipeline. On the other hand, The NYT has already been into kids’ news since 2017.

Producing content for kids doesn’t only have a short-term benefit of increased subscribers during the pandemic, but it’ll also allow you to win future customers. You should refer to these publishers and observe how they are catering to this new audience segment and prepare your strategies accordingly. Also, if you are monetizing kids’ content through ads, don’t’ forget to understand COPPA first.

As per Digiday, the post Q4 picture doesn’t look very promising for publishers. The government is trying to pump the money through economic stimulus, but as most people are holding back on their spendings, the funds are not flowing smoothly in the system. Since the ad business is completely dependent on the flow of money, the future of the industry appears difficult.

Macro-economic factors decide the fate of the industry on a larger scale. CJ Bangah, a partner at PWC, aptly explains the situation in a few words. He says, “As long as people are able to pay the majority of their bills, and the large banks have made appropriate provisions for bad debt, then you’re not looking at a cliff — it’s just the continued challenges in a broader economic environment.”

The chances of new COVID-19 waves, new lockdown impositions, consumers’ reluctance to spend, are all adding up to the future uncertainties. The effect of the virus also varies from country to country. So, it’s wise to wait and watch the situation unfold, instead of assuming that everything will be fine in a few months.

The problem of keyword blocklisting is not new in the industry. The beginning of the coronavirus pandemic and the BLM movement are the most recent examples of events when completely brand-safe pieces of content were blocked for no reason. But, the industry has also been working actively against the problem, initiatives like CNN’s brand safety tool, Reach’s tool called Mantis, etc. are some examples. Now, this time, Dow Jones has come up with SafeSuite, a new tool for its advertisers.

The tool from Dow Jones works on artificial intelligence to sharpen the advertisers’ blocklist. By making the keyword blocklists more relevant, the publisher has tripled its monetizable inventory and improved the reach and effectiveness of advertisers’ campaigns. So how does the tool work? It removes those irrelevant keywords from the blocklist that can block brand-safe articles.

Did this approach work?

You won’t find a perfect brand-safety tool yet, but publishers and other industry players working in the same direction give us incremental improvements in the current situation. Dow Jones’ approach of refining the blocklist has demonstrated impressive results. Let’s hope that more such solutions keep coming so that we can keep getting improved tools in the future.