Automatad Team
“In a perfect world, you’d have one group working together.”

Duopoly has 80% share in Australian Digital Ad Economy The Australian Competition and Consumer Commission reports that Google, Facebook, and YouTube together leave less than 20% of the market share for other players in the digital ad industry. The report is coming out when the government is working on legislation to make the platforms share their revenue with news publishers. This report reinforces the need for the law. But the findings are not surprising at all. This is just the continuation of the trend where platforms have been gobbling up the lion’s share in the market, leaving very little for others. In 2018, Google received $49, Facebook received $24, whereas all the other websites received only $27 out of every $100 spent by the advertisers. In 2019, the share changed to $53 (Google), $28 (Facebook), and $19 (others) US Holiday Ecommerce Sales The US consumers will spend $190.47 billion via e-commerce, during the holidays in November and December. It’ll represent 35.8% of the total sale and a $50 billion YoY increment. On the other hand, the in-store sale will decline by 4.7%. 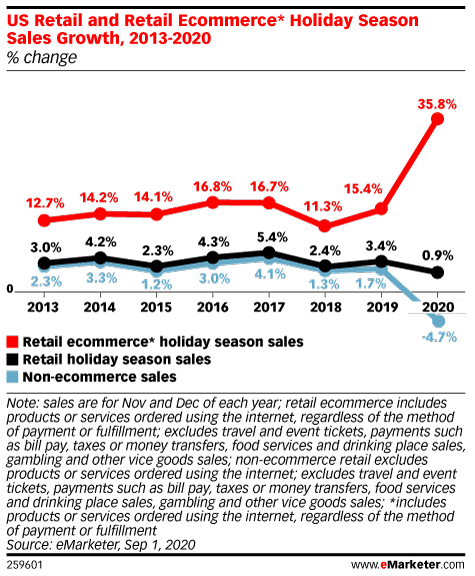 Worldwide Media Ad Spend in 2020 Before the pandemic, eMarketer expected worldwide ad spend to increase by 7%. Later, eMarketer’s June estimates projected a decline of 4.9%, but now the projections are slightly better. The current projections estimate a fall of 4.5% to $614.03 billion. The situation will improve only in 2021 when the global digital ad spending will witness a growth of 16.4%. Spain, Italy, and India will be the worst affected countries in the world. 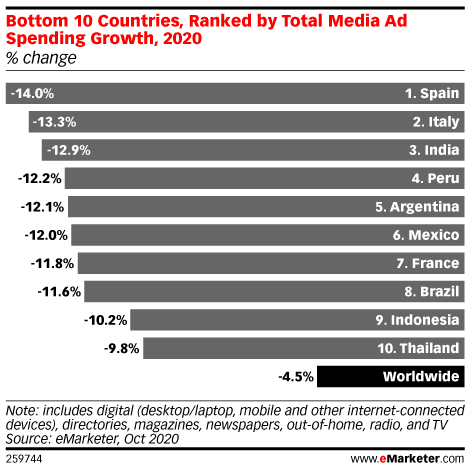 Takeaway: The platforms are becoming bigger and bigger every day, this is why the concerns around their powers are not limited to Australia. The governments and the legislative bodies around the world are taking measures to keep the platforms in check.  The pandemic is causing a growing shift of US consumers towards e-commerce. But, at the same time, the economy is also witnessing uncertainties. So the consumers may not be spending more, but the holiday season is their chance to let go and de-stress themselves with shopping. Be prepared for the holiday sale as this can be a great chance for you to cover the revenue lost during the lockdowns. Our article on seasonality will help.

CCPA 2.0 is Expected to Pass with More Specifics

In the beginning, it was called CPRA; later, it was nicknamed CCPA 2.0; now, people are calling it Prop 24. No matter what the name is, it’ll make our lives difficult. The CPRA will be on the ballot for Tuesday, and it is expected to pass. The CPRA’s definition of personal data includes purchase information, geolocation data, online identifiers, IP addresses, and even inferences drawn from such information to create consumer profiles. It would require all the third-parties involved in serving ads to give explicit notice to consumers and allow them to opt-out from selling or sharing their data. The companies collecting personal data, directly or indirectly, will be liable to disclose it to the users. It’ll be a huge challenge for advertisers, and the dynamics of audience targeting may change to a great extent. We’ll keep you posted.

Bloomberg’s AdOps team has started using an A/B testing tool called ABBA to find out how its infrastructures for subscription business and ad business can support each other. The audience segments that the AdOps team used earlier for ad campaigns will now be used to market its subscription products.  On the other hand, the product team is also building solutions to measure the impacts of the efforts on both ads and subscription business. In short, the AdOps and Product teams are uniting to help each other.

“In a perfect world, you’d have one group working together.”

Similarly, its ad products team developed Ad Quality Index, an internal framework, to measure the effectiveness of its ad units. The AQI helped the publisher to cycle-out around 20 under-performing ad products a lot more quickly than it would normally have. Now the same AQI is helping the publisher in marketing its subscription products more effectively.  Takeaway: Bloomberg is conducting experiments in its operations department and then using the findings to improve multiple sides of the business. You can call it an interdisciplinary approach. What you can learn here is that if different departments of a business can use their expertise to help each other, then the business can grow much faster.

What is Shadow Traff...

Next Post
A Complete Guide to ...
0 Comments
Leave a Reply Cancel Reply