US Media Spend in H1

The impact was different for different categories. For instance, throughout the H1, travel brands spent 50% less, whereas cleaning and household supply brands spent 12.3% more. Tech companies did well too, for instance, Amazon was among the top advertisers with 14.8% increased ad spend.

Biggest Threats to Advertising in the UK

LiveRamp recently took the opinions of 506 UK marketing decision-makers about the biggest threats to their industry. Here are the responses:

The negative impact of the pandemic will subside slowly. Last week we saw how the ad spend is improving across all verticals. Q4 may act as another booster for it.

The influence of the tech giants, including Apple, is something that cannot be denied. The industry is trying its best to fight the mighty players but we are sure that it’ll take a lot of time and effort to make the playing field even for everyone.

Future PLC’s revenue grew by 33% in H1 2020 despite the pandemic. The publishing group expects more than $100 million profit in 2020. How did the publisher do it?

During March, there were some days when less than 100 people were subscribing to the publisher, whereas normally, The Athletic gains thousands of subscriptions every day. But the time has changed and now the Athletic is gaining more subscribers than ever. It has also reached the 1 million subscribers milestone.

So, what makes this sports publisher different from others?

Politico is another successful publisher aiming around 10% growth after the pandemic. Its ad revenue is already back to the pre-pandemic levels.

The publisher has a digital-first approach. Just like many other publishers that successfully maneuvered the pandemic wave, Politico is also less reliant on ads. The pricing of Politico Pro Intelligence starts in four figures. The publisher is able to command such a high price due to its highly concentrated niche focussed on policymakers, lobbyists and contractors, etc.

Publishing is a very competitive industry. The barriers to entry are also not very high. The majority of the publishers are dependent on ad revenues only. We have observed that the most successful publishers during the pandemic were the ones that differentiated themselves with quality content, and spread their revenues across multiple sources.

Learning from the Atlantic’s Subscription Strategy

The Atlantic hoped to gain 110,000 subscribers last year. In the past 12 months, the publisher has gained more than 300,000 new subscribers who are paying $59.99 or $49.99 per month. The results are almost 3 times better than their expectations. So what’s the magic behind this extraordinary success?

The Atlantic has realized that some pieces of content can convert visitors to subscribers on the spot. But such subscribers can also have a high churn rate. To reduce the churn, the Atlantic makes sure that the subscribers develop the habit of reading its content.

The visitors who subscribed instantaneously are kept in a separate cohort. The subscribers in this cohort follow a different onboarding process. First, they are pursued to sign up for the publisher’s newsletters and then for following the publisher’s magazine and authors on social media. The publisher believes that three visits per month are enough to keep the subscriber from lapsing. When a user has not engaged at least three times in a month then the publisher pushes its articles in front of the reader through paid social media ads.

There are many other changes that the Atlantic made to increase its subscriptions. From changing the color of the buttons to reducing friction in the payment process, enabling Facebook Instant Articles and AMP pages for subscriptions, the Atlantic has left no stones unturned.

Data intelligence can give you an edge over your competitors. The Atlantic used the data to make informed decisions and their efforts paid out better than expected. In the current era, data is available in abundance. Build data-driven processes and decision systems to ensure that you are ahead in the competition.

We have seen countless incidents when it felt that Apple is misusing its power to benefit itself. Something similar is happening once again with Apple’s new OS update (and it’s not about IDFA).

Scroll CEO Tony Haile noticed that Apple is bypassing publishers’ traffic with its new Apple News+ feature. When a user is reading a story from an Apple News+ publisher then a smart banner will prompt the user to read it on the Apple News App. The company says that it is doing so to enhance the user experience. 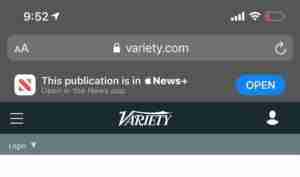 The publishers generally use this banner to prompt users to install their proprietary apps. It’s not clear whether the publishers would be able to do it again or not. Intercepting the publishers’ also means taking the control away from them, Apple should avoid such malpractices.

While Apple was taking away publishers’ traffic, Facebook was seen putting its ads on publishers’ sites without their permission. On one instance, Facebook even placed ads on a site that runs no ads. Below is the image of the site with an ad placed by Facebook.

The issue took place with Facebook’s iOS app. The users visiting publishers’ sites through the app were seeing these interstitial ads. Facebook says that it was a technical glitch and just like always, “Facebook has apologized.”